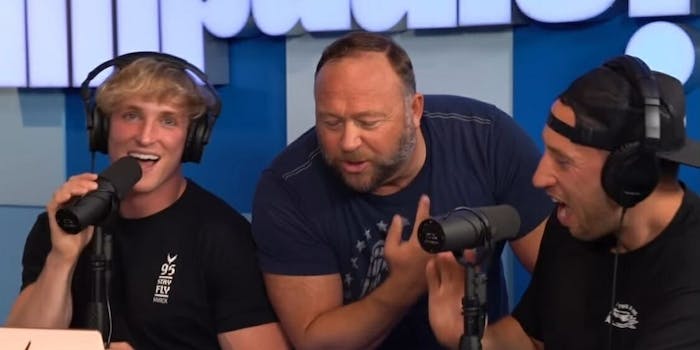 A radical pundit talks to the kids.

Alex Jones didn’t have to say anything controversial on Logan Paul’s podcast for it to be a momentous victory for the far-right radio host.

He’s been banned by almost every social media platform you can imagine, and even if he didn’t open his mouth, Jones received quite a gift from Paul. He got to ramble and rant in front of a new impressionable audience on the Impaulsive podcast Wednesday, and Paul and his co-hosts normalized Jones by laughing with him (not at him) and sometimes agreeing with his thoughts.

But it wasn’t funny. It was dangerous. Especially if you consider who was actually listening.

Yes, Jones, who was banned by YouTube last year, made his return to the platform in February, thanks to his appearance on Joe Rogan’s podcast. But Rogan’s audience is older (and hypothetically) a little wiser. It can laugh off Jones’ assertions that doctors are conspiring to steal babies from poor mothers. Paul’s audience is filled with pre-teens. That means Jones on Thursday reached a younger, more vulnerable audience that could be enthralled by Jones’ charisma.

The vast majority of people don’t watch Jones’ Infowars and we’d like to assume that hardly anybody believes Jones’ ramblings, but he likely got a boost of new fans—or at least youngsters who might think, in their still-developing brains, that Jones’ blustering makes sense. They listened to Jones’ misogyny (he called former NBC and Fox News host Megyn Kelly a “goddamn lying whore”), they listened to him demanding Hillary Clinton’s “milk,” and they listened to him rant about the dangerous Pizzagate conspiracy theory, which posits that Democrats run a child sex-trafficking ring out of a pizza parlor.

From Paul’s perspective, bringing on Jones as a guest makes sense. It’s never going to be boring when Jones is around. He brings in viewership and traffic. Even if people are hate-clicking or rolling their eyes when Jones begins speaking, they’re still pressing play regardless. That means more money for Paul.

But it’s also irresponsible to allow Jones to use your platform for his own good. Paul has nearly 5 million followers on Twitter who could have seen this on Wednesday.

Unfortunately for those who don’t believe in Jones’ extreme right-wing views, that probably compelled more people to check out that edition of Impaulsive.

Now, an even larger chunk of listeners who have probably never heard Jones’ despicable ramblings about the Sandy Hook shooting—which he’s now blaming on a “psychosis”—heard him loud and clear. Maybe some of them believed that Jones’ fringe conspiracy theories have a point.

Even worse, those people are probably kids. We already know YouTubers can influence the minds of children, and we know Paul realizes his audience demographics. He just doesn’t care.

During their chat, Jones claimed that he’s constantly signing autographs for pre-teens and said “I’m not trying to target kids. They just tune in.”

Who knows if that’s factual, but if there’s even a kernel of truth behind that statement, that’s scary as hell.

Since Paul badly hurt his brand and YouTube in general by posting video of a dead body from a Japanese suicide forest at the beginning of 2018, he’s vowed to be more responsible with the way he presents himself on the platform. Aside from the occasional slip-up, 2018’s worst YouTuber of the year who has nearly 19 million subscribers seems to have actually made an effort to live up to his pledge.

But having Jones on his podcast and giving him free rein to spew his hateful rhetoric into the atmosphere was a big mistake. And it could be costlier than we ever know.