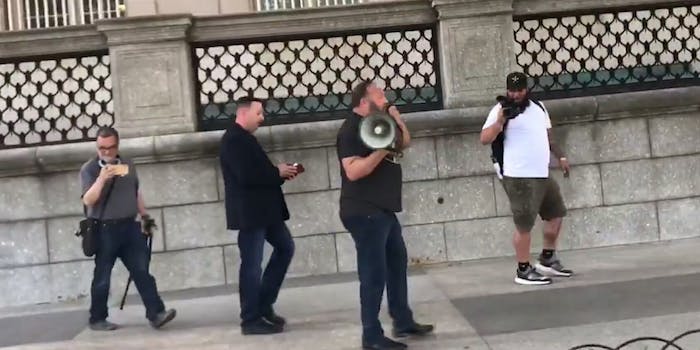 He was protesting social media and tech companies.

InfoWars founder Alex Jones protested against social media and technology companies on Tuesday outside of the White House.

In part of his protest, Jones also referenced tech companies trying to “censor” certain voices, a similar sentiment to what the president tweeted about earlier this week.

During other portions of his protest, Jones walked outside of the White House continuously chanting the name of his website. The InfoWars founder was banned by numerous social media sites last year.

Alex Jones is walking around outside the White House right now shouting "https://t.co/DlAw3hJNAm" over and over again into a bullhorn while a guy with a cardboard cutout of Trump follows him calling him a traitor.

Have a good night, America! pic.twitter.com/kQUAnlqk9N

On Tuesday Dorsey met with Trump, and the president said “lots of subjects” were discussed.

However, according to the Washington Post, a large part of the meeting centered on the president being concerned that his follower count had gone down on the platform.