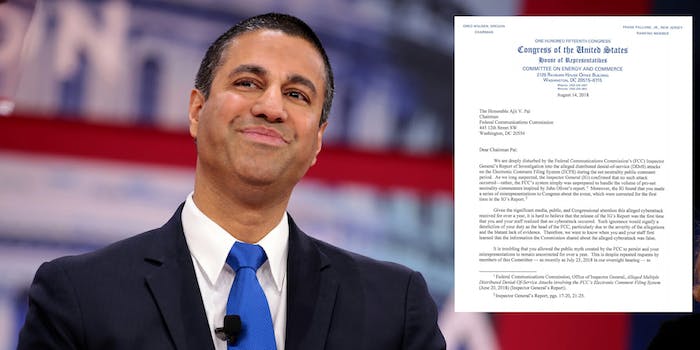 The letter says they are 'deeply disturbed' by the DDoS claims.

While Federal Communications Commission (FCC) Chairman Ajit Pai will face questions from the Senate Commerce Committee tomorrow, the other chamber of Congress also wants answers about the agency’s initial claim that its net neutrality public comments were subjected to a cyber attack.

Four members of Congress wrote a letter to Pai on Tuesday saying they were “deeply disturbed” by an Inspector General’s report that showed the FCC was not hit by a distributed denial-of-service (DDoS) attack after Last Week Tonight host John Oliver called on viewers to leave public comments in favor of keeping net neutrality protections.

Net neutrality advocates pushed against the claims at the time and called on the FCC to release evidence the alleged attack actually occurred.

“Given the significant media, public, and Congressional attention this alleged cyberattack received for over a year, it is hard to believe that the release of the IG’s report was the first time that you and your staff realized that no cyberattack occurred,” the letter reads. “Such ignorance would signify a dereliction of your duty as the head of the FCC, particularly due to the severity of the allegations and blatant lack of evidence.”

Pai attempted to get ahead of the report’s release by blaming the agency’s former chief information officer for providing “inaccurate information” about the alleged DDoS attack.

The House letter asks Pai to answer a series of questions including:

It also asks to provide copies of requests from the IGs office not to disclose publicly that a cyberattack did not occur, if they exist.

Fight for the Future, an internet rights group that has been involved in efforts to restore net neutrality protections, called Pai “an embarrassment” and called on lawmakers to support the CRA efforts in the House.

“We knew he was lying about his reasons for killing net neutrality, but now we know his agency also lied to Congress, journalists, and the public about something as serious as a cyberattack,” Evan Greer, the deputy director of the group, said in a statement. “He may well be the Republican party’s biggest liability in the midterm elections. Lawmakers are rightly demanding answers. But they should also act immediately to overrule Ajit Pai’s corrupt gutting of net neutrality, by signing the discharge petition and passing the Congressional Review Act (CRA) resolution to reverse the repeal.”

The letter requests answers to their questions by the end of this month.