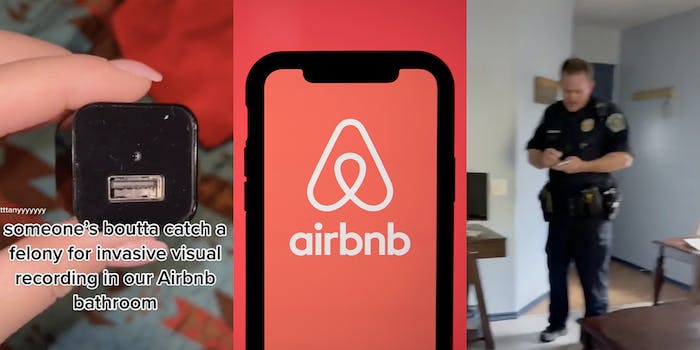 'Someone's about to catch a felony for invasive visual recording in our Airbnb bathroom.'

Airbnb guests alleged in a viral TikTok that they found a hidden camera in their host’s bathroom. According to the TikTok, the police showed up at the Airbnb.

Brittany Walsh’s (@brittttttttanyyyyyyy) TikTok starts with her holding up what appears to be the camera either inserted into or disguised as a charger box. She also features a portion of the online Airbnb listing. The TikToker then pans around the Airbnb, showing two police officers.

The text overlay reads, “Someone’s about to catch a felony for invasive visual recording in our Airbnb bathroom.”

The Airbnb location appears to be in Austin as the apartment features an “Austin” wall installation.

The TikToker also claimed in the caption that the first upload of the same video “got deleted.”

The video has been viewed over 358,500 times since being posted on Monday.

Some commenters aimed to give advice on how to deal with the situation.

“Put the micro SD card in a computer. The first video should be the person who originally plugged it in,” @jentx9 claimed.

“A big one is smoke alarms too. Most good cameras you would never find though. There are apps that can scan the Wi-Fi for devices that are cameras,” @upagainst said.

“Why the bathroom tho … you really wanna watch me fight for my life on your toilet???,” @scrappyslut questioned.

“I literally changed my clothes in a dark Airbnb closet the one time I stayed in on cause of this lol,” @boolin.boling said.

“I clean rental cabins in the gatlinburg TN area..there are cameras all over those cabins where they are not supposed to be!,” @mountainmom3 claimed.

Walsh followed up in the comments section on Monday: “Will do a story time after I hear back from Airbnb support & see what comes of the police investigation!” She has yet to post the follow-up video.

Update 3:10pm CT Feb. 22: When reached for comment, an Airbnb spokesperson told the Daily Dot in a statement it is investigating the incident.

Update 3:10pm CT Feb. 22: “Airbnb strictly prohibits ‘hidden cameras’ as well as recording devices of any kind in private spaces such as bathrooms and bedrooms. We take this allegation extremely seriously and our dedicated Safety team is thoroughly investigating,” the statement read.

The Daily Dot reached out to Brittany Walsh via TikTok direct message.

Editor’s note: Due to a technical error, our original message to Walsh may not have been delivered. We have since reached out.