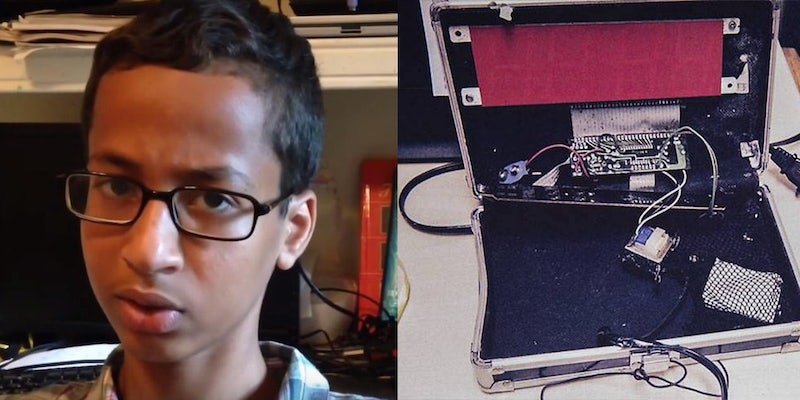 The first kid to get suspended from school and invited to the White House in one day.

Facing a national outcry over the arrest of Ahmed Mohamed, a 14-year-old who brought a homemade clock with him to school, police in Irving, Texas, have declined to press charges against him.

Mohamed is still being punished at MacArthur High School, however, where he says five police officers interrogated him without his parents’ permission. The interrogation, he told reporters, “made me feel like I wasn’t human—it made me feel like a criminal.”

Despite the dropped charges and high-profile attention, Irving Independent School District administrators felt it was necessary to suspend Mohamed for three days.

Amid a flurry of support from social media, which rallied behind Mohamed with the #IStandWithAhmed hashtag, President Barack Obama personally invited Mohamed to visit the White House.

During a briefing report on Wednesday, White House press secretary Josh Earnest said it was “clear some of Ahmed’s teachers have failed him.” The teenager, who is by all accounts an electronic whiz, has been invited to Astronomy Night at the White House next month, Earnest said.

At a press conference Wednesday afternoon, Mohamed confirmed that he plans to take Obama up on his invitation.

Facebook co-founder Mark Zuckerberg extended an invitation as well. “Ahmed, if you ever want to come by Facebook, I’d love to meet you,” he wrote on Facebook.

Irving police have dismissed accusations that Mohamed’s treatment had anything to do with his race or religion. His father isn’t so sure, telling reporters that he believes his son was mistreated “because his name is Mohamed and because of September 11.”

At a separate briefing, Irving Police Chief Larry Boyd said that the arresting officers determined Mohamed’s device was not a bomb, which is why the school was not evacuated.

The investigation, Boyd said, “was to determine whether there was intent created by what the student brought to school, or whether it was just a naive set of circumstances, with him not recognizing the suspicious nature of the situation.”

“Ahmed Mohamed’s avoidable ordeal raises serious concerns about racial profiling and the disciplinary system in Texas schools,” Terri Burke, executive director of the ACLU of Texas, said in statement. “Instead of encouraging his curiosity, intellect and ability, the Irving ISD saw fit to throw handcuffs on a frightened 14 year-old Muslim boy wearing a NASA T-shirt and then remove him from school.”

“Yes, I was definitely happy they dropped the charges when I didn’t commit a crime.”

U.S. Congresswoman Judy Chu (D-Ca.) issued a statement decrying what she called a “culture of suspicion” for victimizing Mohamed. “We must be better than to treat school children as terrorists. Ahmed’s suspension should be lifted, he should be brought back to school where he belongs, and his teachers and principal must apologize,” she said.

Beth Van Duyne, Irving’s Republican mayor, wrote in a Facebook post that she was proud of the diligence and professionalism of the Irving Police Department and of the school administrators.

“The first concern for the Irving Independent School District and the Irving Police Department is always the safety of our children and Irving citizens,” Duyne said.

She added: “I do not fault the school or the police for looking into what they saw as a potential threat. They have procedures to run when a possible threat or criminal act is discovered.”

Linda Marino, counsel for the Mohamed family, condemned the school for taking action against Mohamed.

“He’s just a bright, 14-year-old, American-Muslim kid, and all he did was a science project for his school,” Marino said. “He made an alarm clock to impress his teachers. And what happened? He certainly didn’t expect to be detained, interrogated, handcuffed, booked, fingerprinted, and arrested, at the end of the school day.”

“It didn’t bother me that they didn’t apologize,” he added, “with all the supporters I have, an apology has already been made by all my supporters.”

Mohamed says that he has no plans to return to MacArthur and will instead transfer to a different high school. He added that he plans to attend the Massachusetts Institute of Technology after graduation.