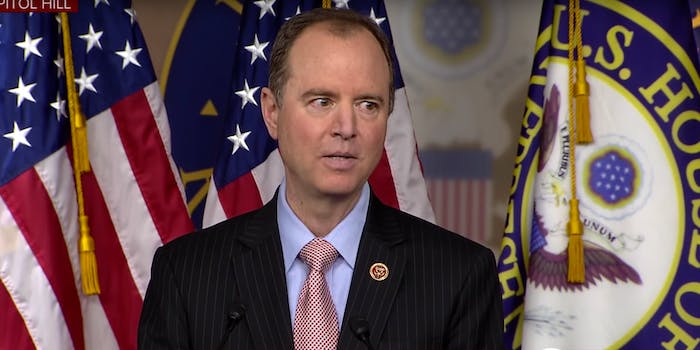 Rep. Adam Schiff said he believes an open hearing was cancelled due to 'pushback from the White House'

The ranking member of the House Intelligence Community on Friday openly questioned the decision of chairman Devin Nunes (R-Calif.) to cancel an open hearing next week in the panel’s ongoing investigation into ties between the Russian government and the Trump campaign.

Nunes told reporters on Friday the open hearing had been canceled to make room for a hearing with FBI Director James Comey and National Security Agency Director Mike Rogers, this time behind closed doors so that classified information could be discussed.

Comey and Rogers both appeared on Monday before the committee in an open hearing in which they confirmed that neither of their agencies had seen any evidence to support President Trump’s claim that his communications were “wiretapped” by the Obama administration.

The ranking member on the House Intelligence Committee, Rep. Adam Schiff (D-Calif.), said at a news conference on Friday that he believes the cancellation of the open hearing with Yates, Brennan, and Clapper happened because of “push back” Nunes received “from the White House.”

“It’s hard for me to come to any other conclusion about why an agreed upon hearing would be suddenly canceled,” Schiff said.

“I don’t think anyone should have any question about what is really going on here,” said Schiff. The desire to hold a second, closed session with Comey and Rogers was not at conflict with holding the open hearing, he said. “That is at most a dodge.”

On Wednesday, Nunes rushed to the White House with what he described as new documents that showed communications from Trump’s transition team had been incidentally swept up in legal surveillance done by U.S. intelligence while Obama was still in office—information Nunes has not shared with the other members of his own committee, according to Schiff on Friday.

Just as he had for the past two days, Nunes refused to say on Friday whether the documents apparently leaked to him came from a source affiliated with the White House. He merely said the White House did not influence his decision to alert the media of their existence.

Nunes appeared to walk back his remarks about what the documents showed, saying it was unclear whether it was proof conversations among Trump or his associates had been monitored.

Democrats, and some key Republicans, have offered up Nunes’s “dead of night” sprint to the White House—as Schiff characterized it—as evidence that he is incapable of leading a proper investigation into Russia’s interference with the 2016 election, specifically as it pertains to potential ties between the president’s associates and Kremlin officials.