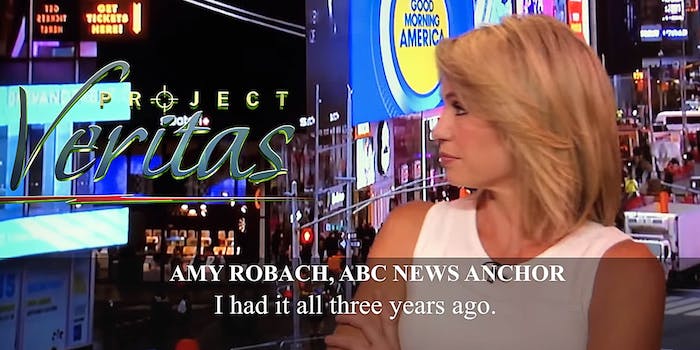 Right-wing activist site Project Veritas published audio it obtained of ABC news anchor Amy Robach on Tuesday. In it, she laments that the network killed a big story she had planned on Jeffrey Epstein, the wealthy financier who killed himself after being arrested for running a pedophile ring.

In the clip, Robach says that she’d scored an interview with Virginia Giuffre, who says she was raped by Epstein and Prince Andrew.

Robach says that the network relented under pressure from the royal family, hoping to maintain interview access to Prince William and Kate Middleton.

Robach said that she has “everything” needed for the story, including being able to implicate former President Bill Clinton, who has ties to Epstein.

Project Veritas, a right-wing organization known for manipulating videos and overhyping sources, says the video of Robach came while she was caught on a hot mic.

In this instance, unlike many others, Robach didn’t deny Project Veritas’ video. But she did challenge what they showed.

Robach said, according to the Daily Beast, “a private moment of frustration. I was upset that an important interview I had conducted with Virginia Roberts [Guffrie] didn’t air because we could not obtain corroborating evidence to meet ABC’s editorial standards,” but that “no one ever told me or the team to stop reporting on Jeffrey Epstein, and we have continued to aggressively pursue this important story.”

ABC also said that her interview did not meet its reporting standards, but it did not stop her from continuing to try and report.

Project Veritas’ scoop comes in the wake of recent reporting that NBC News held up a story about sexual misconduct by Harvey Weinstein, in Ronan Farrow’s new book. Those two items combined to lend credence to the assumption many have about the media covering up for powerful liberal figures.

Given that Robach was working on this story in 2015, and mentioned Bill Clinton in the video, there was also the assumption this was done to help Hillary Clinton’s election chances in 2016.

Many drew a comparison to coverage of Brett Kavanaugh’s Supreme Court confirmation, where media organizations covered numerous stories about his misconduct, saying it was because he was a conservative justice.

ABC News anchor Amy Robach says her network spiked an explosive exposé about Jeffrey Epstein and the Clintons in the middle of the 2016 election. https://t.co/FHI4XccAiI

ABC will air a video from a Kentucky gun range and pass it off as footage from Syria.

Or Brian Ross will air a fake report about Michael Flynn and Russia, which will then tank the stock market (remember that one?)

But they'll sit on the Epstein story for years. #EpsteinCoverup https://t.co/xFw58LpG52

#EPSTEINCOVERUP – @ABC fully prepared to smear Judge Kavanaugh with no legitimate basis, yet sits on story about Clinton buddy Jeffrey Epstein's sex trafficking/exploitation of children, because of his rich and powerful connections? #howmanygirls lost their innocence as a result? https://t.co/J9cpURPsIn

"we could not obtain sufficient corroborating evidence to meet ABC’s editorial standards about her allegations," an ABC news anchor writes.

ABC News had everything on Epstein *three years ago* and spiked the story… including stuff on the Clintons.