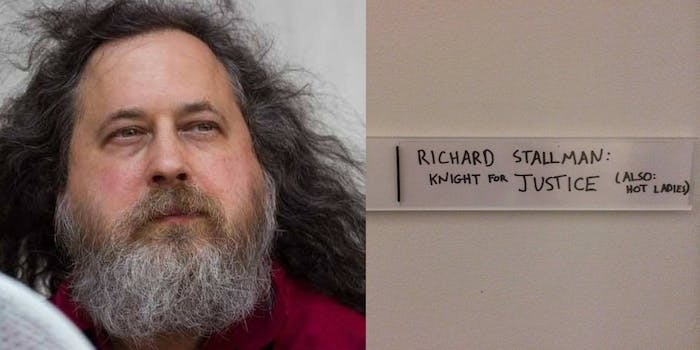 Richard Stallman referred to Jeffrey Epstein's victim as part of a 'harem' in a department-wide email.

According to an email thread circulated among an MIT cohort and shared with the Daily Dot by a former MIT student, programmer, and free software advocate Richard Stallman sent an email on Wednesday referring to Epstein’s victims as “one of Epstein’s harem” and likely “entirely willing.” Stallman also wrote that the phrase “sexual assault” carries too much weight for Marvin Minsky’s actions, referring to the former MIT professor who faced sexual assault accusations and died in 2016.

Epstein died by suicide while in jail awaiting a trial on sex-trafficking charges. At least two dozen underage girls have officially accused him of sexual abuse, and court documents that were made public before Epstein’s death implicated powerful people were involved in the abuse. MIT Media Lab Director Joi Ito recently came under scrutiny for accepting money from Epstein.

Stallman was responding in the email thread regarding a Facebook event scheduled for Friday at MIT. A description for the Facebook event, titled “They Knew: Speak-out against MIT-Epstein Scandal,” said accepting funds from Epstein “violated MIT’s own donor policies” and called on senior administration personnel involved in accepting funds to resign.

“The announcement of the Friday event does an injustice to Marvin,” Stallman wrote in the email reviewed by the Daily Dot, referring to the mention of accusations of sexual assault against Minsky. “The injustice is in the word ‘assaulting’. The term ‘sexual assault’ is so vague and slippery that it facilitates accusation inflation: taking claims that someone did X and leading people to think of it as Y, which is much worse than X. The accusation quoted is a clear example of inflation.”

In a later part of the email, Stallman called one of Epstein’s victims a member of his “harem” and wrote, “the most plausible scenario is that she presented herself to him as entirely willing.”

“There is nothing wrong with women. There is nothing wrong with girls in STEM. There are many women and many girls who, in spite of everything, love STEM-related disciplines,” wrote Gano, who graduated from MIT in 2018. “Some of them even go through 4-year bachelors degrees at MIT, maybe even 7 years of a PhD, and then begin questioning whether they should continue in these fields, because they are filled to the brim with so, so many shitty men.

“The laundry list of men in tech and academia who have continued this pattern of harassment, misogyny, and discrimination,” she added.

In follow-up emails, after other members in the email thread argued against Stallman’s comments, he stood by his point.

After someone in the thread said that the victim was 17 years old, constituting rape in the Virgin Islands, Stallman wrote, “Does it really? I think it is morally absurd to define ‘rape’ in a way that depends on minor details such as which country it was in or whether the victim was 18 years old or 17.

“I think the existence of a dispute about that supports my point that the term ‘sexual assault’ is slippery, so we ought to use more concrete terms when accusing anyone,” he added.

In the Medium article, Gano shared an image of the name placard she said is posted outside Stallman’s door at MIT, reading “Richard Stallman: Knight for Justice (Also: Hot ladies).” Gano, who was a Media Lab undergraduate researcher for three years in a row, told the Daily Dot she did not take the photo. The number on the placard matches the office number listed for Stallman on MIT’s website. Stallman did not respond to the Daily Dot’s request for comments.

Gano told the Daily Dot that she was shown the email thread by a friend in the department who feared retaliation if they exposed their identity. In the Medium post, Gano also noted Stallman’s record of problematic views on child pornography, including a defense of “voluntary” child pornography that doesn’t take into account the discrepancy between the decision-making abilities of children and adults.

Geek Feminism Wiki, a resource page “for and about women in geek communities” has a list of Stallman’s comments on child pornography, denigrating women, and comparing people with Down Syndrome to pets. The list is linked on his own website, where he boasts his support for these beliefs.

In 2003, Stallman said child pornography, incest, and pedophilia, necrophilia, bestiality, and prostitution “should be legal as long as no one is coerced. They are illegal only because of prejudice and narrowmindedness.”

“I am skeptical of the claim that voluntarily pedophilia harms children,” Stallman wrote in 2006, responding to report of a political party created by Dutch pedophiles. “The arguments that it causes harm seem to be based on cases which aren’t voluntary, which are then stretched by parents who are horrified by the idea that their little baby is maturing.”

In 2012, Stallman demanded “an end to the censorship of child pornography.”

Gano’s reflections sharply criticized MIT. “Why do we ponder the low enrollment of female and minority graduate students at MIT with one hand and endorse shitty men in science with the other?” she wrote. “Not only endorse them—we invite them to our campus where they will brush shoulders with those same female and minority students. Why do we excuse people simply because they are ‘geniuses’?’”

It’s unclear if the email thread will result in any consequence for Stallman. The Daily Dot has reached out to Daniela Rus, director of MIT’s Computer Science & Artificial Intelligence Laboratory, the research group involved in the email thread.

Update 10:03am CT, Sept. 17: Richard Stallman has resigned from MIT’s Computer Science & Artificial Intelligence Laboratory, Vice reports. Stallman posted an email he sent regarding his resignation on his website.

“I am resigning effective immediately from my position in CSAIL at MIT,” Stallman wrote in the email. “I am doing this due to pressure on MIT and me over a series of misunderstandings and mischaracterizations.”

Stallman also resigned as president from the Free Software Foundation and its board of directors.

Correction: Stallman wrote that the phrase “sexual assault” carried too much weight regarding Minsky’s actions.