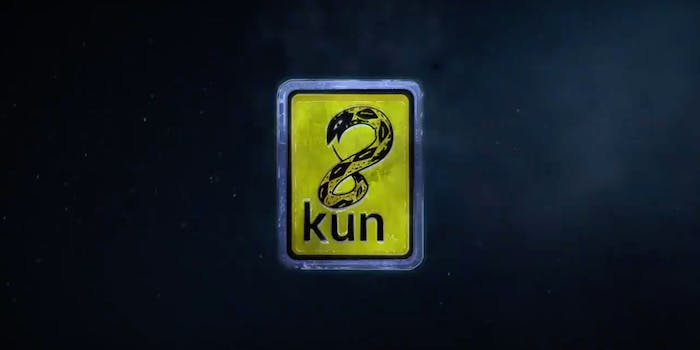 8chan originally shut down after several mass shooters uploaded their manifestos to the message board.

On a verified Twitter account that has remained dormant since Sept. 11, 8chan released a trailer late Sunday night signaling that the controversial online forum is in the process of rebranding and attempting to relaunch.

The trailer shows a newly designed logo of a snake in the shape of an ‘8’ juxtaposed with heavy storm imagery. Due to sites like  Stormfront and the Daily Stormer, storm imagery has been weaved into the far-right mythos and can serve as an indicator of white supremacist and neo-Nazi ideologies.

The trailer also reveals that 8chan, should it return, will now go by the name ‘8kun.’

This name change relates to Japanese honorifics. The “-chan” suffix, while also Japanese, is usually used to refer to children whereas “-kun” typically refers to young men or juniors in the workplace. It is perhaps signalling the site wants to grow up.

8chan has been a hub for a large amount of discussion surrounding the QAnon conspiracies and many are already attempting to find nods to Q in the teaser video.

8chan has been shut down since Aug. 5 after cybersecurity company Cloudfare chose to sever ties with the website. Between March and August, perpetrators of the Christchurch, New Zealand mosque shooting, the Poway, California synagogue shooting, and the El Paso, Texas Walmart shooting posted their manifestos to 8chan prior to committing their acts.

Current 8chan owner Jim Watkins and his son Ron have since claimed that the site is “voluntarily” offline. Despite this, Ron claims that 8kun is “now in the final stretches before getting things back online.”

During the website’s downtime, Jim Watkins provided evidence surrounding 8chan to the House Homeland Security Committee after being subpoenaed to do so.

After a few weeks of building new groundwork to better protect user privacy and security, we are now in the final stretches before getting things back online. Beta testing of infrastructure in progress – verifying and confirming that all systems are functioning as expected.

Frederick Brennan, the original founder of 8chan, has vocally distanced himself from the website.

“I made 8chan in October 2013 and quit in April 2016. It is now owned by people who I have no control over,” reads Brennan’s Twitter bio.

Brennan appears skeptical that any form of relaunch will last or even get off the ground in the first place. According to Brennan, 8kun may be dead on arrival as he suggests that the site’s projected URL is registered with Tucows, a domain registration service that previously banned 8chan.

In what world do they think that the media will see they rebranded to "8kun", and not see that as a transparent maneuver?

In what world do they think domain hosts and providers will say, "oh, 8chan? No can do. But 8kun? You're hired!"