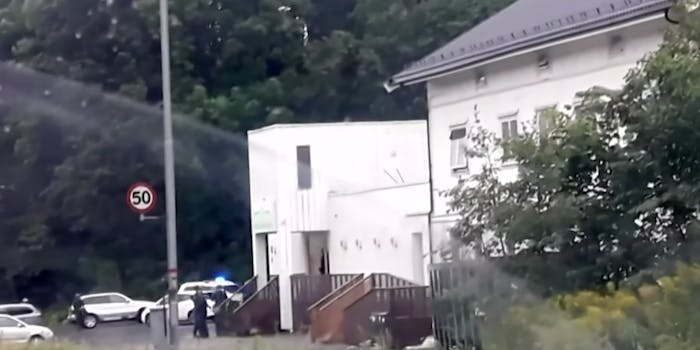 No, the Norway mosque shooter did not post to 8chan before attack

Despite media reports, the gunman may have posted to a lesser-known forum instead.

A terror attack on a mosque in Norway on Saturday was preceded by an ominous post on the website 8chan. That’s according to the New York Times, which reported that the gunman, described by Norwegian police only as a young white male, had potentially left a warning about the attack just hours prior on the disgraced forum.

But the claim is untrue. The gunman may have posted to an online forum, but it wasn’t 8chan.

A gunman entered a mosque just outside the capital city of Oslo with a helmet and body armor as well as “two shotgun-like weapons and a pistol,” according to a witness, per the Times. That witness, 75-year-old congregant Irfan Mushtaq, sustained minor injuries while overpowering the suspect. Although the alleged gunman was said to have fired several shots, no one was seriously hurt.

Norwegian police say a search of the accused gunman’s home yielded a dead body, resulting in a murder charge on top of the attempted murder charge linked to the mosque attack.

The Times goes on to state, citing police, that two hours before the shooting a post on 8chan “raised questions of whether it could have been written by the suspect in the Norway attack.” The Times claims that an 8chan user stated that it was his “time” before using the Norwegian phrase, “Valhall venter,” or “Heaven awaits.”

The only problem is that 8chan went offline days before, in wake of the mass shooting in El Paso, Texas, last week. Yes, 8chan has been popping on and off the deep web, struggling to stay online–but it is most currently offline.

The El Paso shooting, in which a 21-year-old male opened fire with an AK-47 at a Walmart, taking the lives of 22 people and injuring more than two dozen others. The accused gunman, in that case, is believed to have posted a manifesto to 8chan, making him the third person to do so before an attack.

Fact check: 8chan was offline the entire day that @nytimes falsely claims a Norwegian shooter posted on 8chan before shooting in a mosque. How does one post on an offline site? @verge redacted their similar false story. Who was their common source? https://t.co/1r4euW0IpL

The claim that 8chan had been linked to the Norway shooting was also picked up by the Verge, which cited the Norwegian news site Budstikka. That site, however, does not mention 8chan specifically and cites another outlet, known as TV2. TV2 similarly points to an “online forum” but fails to mention 8chan by name.

The Verge later pulled the story and released a statement on Twitter, noting that the report contained “unverified information.”

Note: we have taken down an earlier story about a suspected post on 8chan from an alleged shooter because it contained unverified information and did not meet our editorial standards. We regret the error.

The Daily Dot reached out to Oslo police for clarification but did not receive a response at press time. So if 8chan was down during and prior to the Norway mosque attack, where did the alleged post originate?

Other news outlets pointed to different forums. An article from the Independent alleges that the post appeared on 4chan, not 8chan.

But that claim doesn’t appear to be accurate either. A search of 4chan does not yield the post in question. (Even if it is taken down, nothing on the internet ever truly disappears.) One 4chan user did find what appeared to be the alleged shooter’s post. While it does appear that the post appeared on a message board, the color scheme does not match 4chan’s.

The post was also made by someone calling themselves Philip Manshaus, which matches the name of the accused shooter, according to numerous media reports.

An unsanctioned version of 8chan, known as 08chan, did appear on ZeroNet–a peer-to-peer network designed to be resistant to censorship–after the original forum went offline. But that site does not match the color scheme and design of the alleged shooter’s post either.

One site does though: EndChan. The imageboard has seen an influx of 8chan refugees in the past few days. But the site was suddenly pulled offline on Saturday for unexplained reasons, the same day as the incident in Norway. The Twitter account for EndChan stated on Sunday–the following day–that the “site will stay up,” but it has remained offline as of Sunday afternoon.

It has been decided the site will stay up

Although the forum was offline, the Daily Dot was able to find a cached version of the alleged shooter’s post on EndChan, confirming the post’s origin.

The Daily Dot has reached out to the EndChan Twitter account to confirm that the site is aware of the post and if the post was the reason the forum was taken offline but did not receive a response at press time.