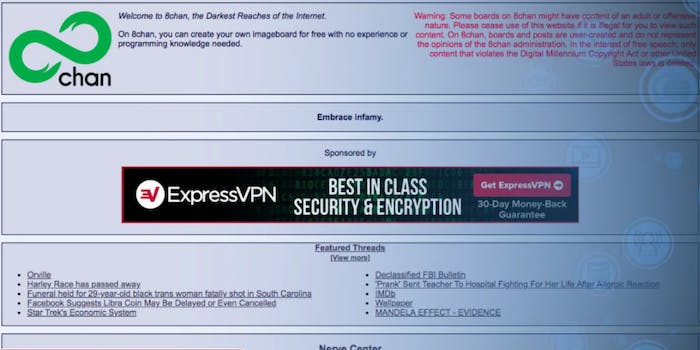 8chan resurfaces on the deep web

The Daily Stormer is also back up and running.

Many assumed 8chan was on its last breath when multiple companies–starting with Cloudflare–pulled their support for the alt-right message board in wake of the El Paso shooting on Saturday.

The shooter allegedly posted a hate-filled manifesto onto 8chan only minutes before his attack, which has taken the lives of 22 people. If verified, the manifesto would become the third one posted onto 8chan prior to an attack.

“8chan has repeatedly proven itself to be a cesspool of hate,” Cloudflare CEO Matthew Prince wrote in a Sunday blog post. “We reluctantly tolerate content that we find reprehensible, but we draw the line at platforms that have demonstrated they directly inspire tragic events and are lawless by design. 8chan has crossed that line. It will therefore no longer be allowed to use our services.”

Since Monday, the site has remained offline for the most part, but it now appears that 8chan–along with several other hate-filled sites like the Daily Stormer–are making an unsurprising resurgence. Back in 2017, Cloudflare terminated its contract with the Daily Stormer, but the site popped back up shortly after–only to be hosted by a Cloudfare competitor. Prince predicted the same would happen with 8chan.

The loosely regulated site, launched in 2013, has been linked to harmful right-wing and alt-right activism as well as multiple mass shootings. The gunman behind the Christchurch mosque shootings, which claimed the lives of 51, and the gunman behind the Poway synagogue shooting, killing one, both posted their manifestos onto 8chan prior to their attacks.

After the latest attack was linked to the site, 8chan’s founder Fredrick Brennan distanced himself from it, calling for it to be shut down.

“It’s not doing the world any good,” Brennan told the New York Times. “It’s a complete negative to everybody except the users that are there. And you know what? It’s a negative to them, too. They just don’t realize it.”

The Daily Dot has reached out to Voxility and Epik.