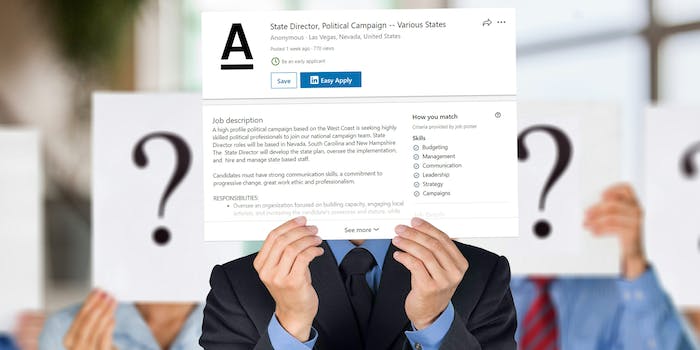 Who put up the mystery postings? We know who it's not.

Two job postings, one from Dec. 1 and one on Dec. 5, fueled questions online about progressive 2020 Democratic presidential candidates.

But the answer turned out to be someone who the left may not want.

A posting on LinkedIn, and another on Democratic GAIN, a professional organization for left-leaning organizations and political operatives, posted the following last week:

“A high profile political campaign based on the West Coast is seeking highly skilled political professionals to join our national campaign team. State Director roles will be based in Nevada, South Carolina and New Hampshire  The State Director will develop the state plan, oversee the implementation, and hire and manage state based staff.

Candidates must have strong communication skills, a commitment to progressive change, great work ethic and professionalism.”

The listing goes on to detail the preferred attributes and experience for candidates. As of this writing, the LinkedIn listing has fewer than 25 applicants.

The LinkedIn posting promises that the political candidate will be revealed after an initial screening interview. People online immediately associated the postings with Sen. Kamala Harris (D-Calif.), because of the West Coast association.

But it turned out to be another candidate.

A spokesperson for billionaire liberal financier Tom Steyer told BuzzFeed the posts were from him. Aleigha Cavalier, Steyer’s spokesperson, said the posts did not necessarily mean Steyer was running.

The LinkedIn profile associated with the listing is for an advertising and marketing company in Hong Kong, called Anon. The posting may be linked to the agency due to a technical glitch since it was posted anonymously; several job postings appear to be mistakenly associated with the company.

The Democratic GAIN posting has an email address associated with it; the Daily Dot reached out to the email address multiple times, with no response.

Amy Pritchard of Democratic GAIN said that the posting was verified and on behalf of a bona fide political candidate. Pritchard said she had verified the credit card information from the person who paid for the ad and assured the Daily Dot that it wasn’t an impostor.

Pritchard said to the Daily Dot she “was surprised, actually, at who it was,” although she would not reveal the candidate.

Pritchard added that: “There are lots of people, who are legit, who use this as a fishing expedition…they genuinely are collecting resumes,” when putting out job postings. She added that that wasn’t the case here, but it’s worth noting that not every job posting automatically means a presidential campaign announcement is forthcoming.

Colorado Governor John Hickenlooper and Julian Castro have both announced they are exploring presidential runs. Maryland Rep. John Delaney is the only Democrat to have formally announced his candidacy.

Update 5:14pm CT, Dec. 12: A spokesperson for Steyer confirmed to the Daily Dot the postings are for Steyer but reiterated that they were only exploratory.

“As Tom has said publicly — he is considering how he can have the most impact in 2020 and our team is exploring staffing options should he decide to move forward with a run,” Aleigha Cavalier told the Daily Dot. “Tom has not made a final decision and any discussions with potential staff are preliminary.”