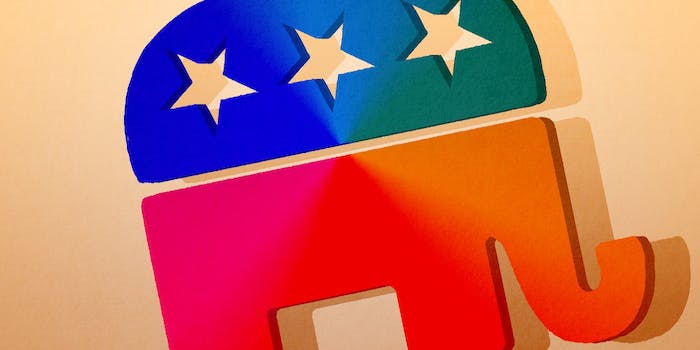 From 'prison makes you gay' to "Yaaas, Hillary,' these are all the things you need to know about the big race.

Twenty years ago, when Republican politicians uttered a word about the LGBT community, it was usually “sodomy.” Democrats were hardly more evolved—after all, it was Bill Clinton who silenced military gays with Don’t Ask Don’t Tell and locked out same-sex marriage with the Defense of Marriage Act.

How times have changed.

This election year, LGBT rights are among the main issues driving the electorate toward or away from the leading presidential candidates in both parties. Whether it’s to show support or to denounce recent changes, like the Supreme Court’s same-sex marriage decision, every candidate is expected to address LGBT rights at length.

For the first time in U.S. history, entire campaigns can be sidetracked by a few comments about the equality of lesbian, gay, bisexual, and transgender Americans.

LGBT citizens have gained more political footing and legal equality in the past 10 years than possibly in the history of human existence.

While that means a renewed sense of fight for many candidates on the right, it also means they have to choose words carefully. Republicans are saying things about LGBT rights these days that sound more polite than ever before, but that also carry the potential to erode those rights when read between the lines.

Similarly, the Democrats are making more promises than ever before, and shooting campaign videos that feature LGBT couples for the first time. But do they really mean it?

No acting president ever mentioned the LGBT community in an inaugural address before President Barack Obama did so in 2013—and then only in his second term, considered a kind of political safe-zone, where a president can really let loose. In 2015, he became the first U.S. President to ever pose for a gay magazine. But even Obama opposed marriage equality early in his career, saying in his 2004 Senate race that “marriage is something sanctified between a man and a woman.”

The point is, the nation is quickly playing catch-up on LGBT rights after decades of oppression and invisibility. LGBT citizens have gained more political footing and legal equality in the past 10 years than possibly in the history of human existence. In order to cast a fully informed vote in the 2016 presidential race, it’s imperative that you understand where each candidate stands on the issues. Don’t worry: We’ve done the work for you. 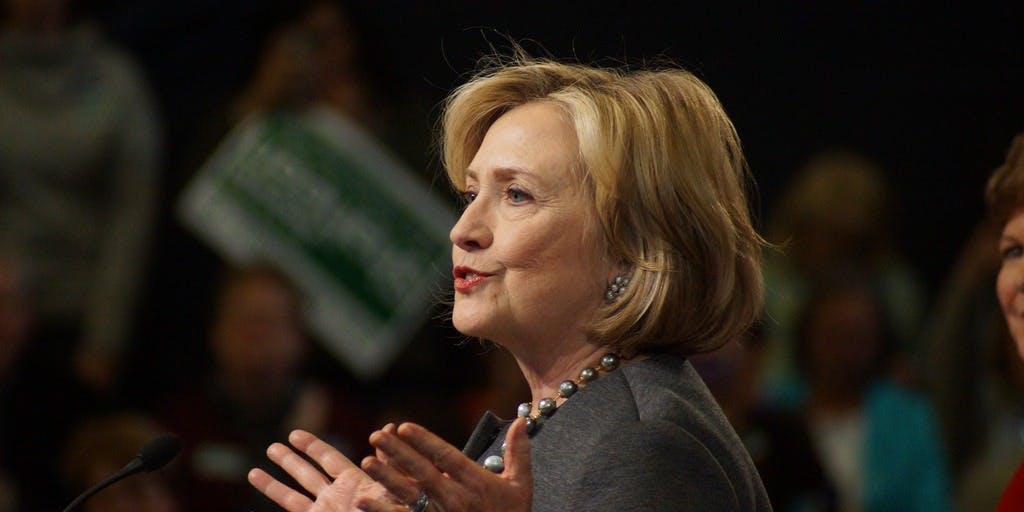 Despite her past waffling—not to mention her association with husband Bill’s track record—Clinton remains the LGBT community’s favorite. Her campaign announcement video this spring featured not one but two same-sex couples. She’s got LPAC (the lesbian power group) lobbying for her with the Lesbians 4 Hillary campaign. Besides having snagged the endorsements of most of the country’s Democratic politicians and nearly all of Hollywood, Clinton is officially backed by LGBT powerhouses like Equality California, James Obergefell (plaintiff in the landmark Supreme Court marriage case), and pretty much every major national women’s group.

But why is Hillary such a gay fave, to the point where she released campaign T-shirts this year with “Yaaas, Hillary” emblazoned across the chest? It’s not just her years of making LGBT rights a top foreign policy priority as secretary of state, and her work to undo the DOMA and DADT laws of her husband’s tenure, but her current promises.

Despite an attitude towards LGBT people that the Advocate called “tepidly tolerant” in October, Hillary has gone further than any other candidate in vowing to push forward LGBT rights. Among her campaign promises, laid out in an October speech at the Human Rights Campaign’s D.C. headquarters: to sign the federal Equality Act and outlaw anti-LGBT discrimination throughout the nation, to cut off federal funding for adoption agencies that refuse same-sex couples, to “address the crisis of transphobic violence,” to cap expenses for HIV and AIDS drugs, and more. 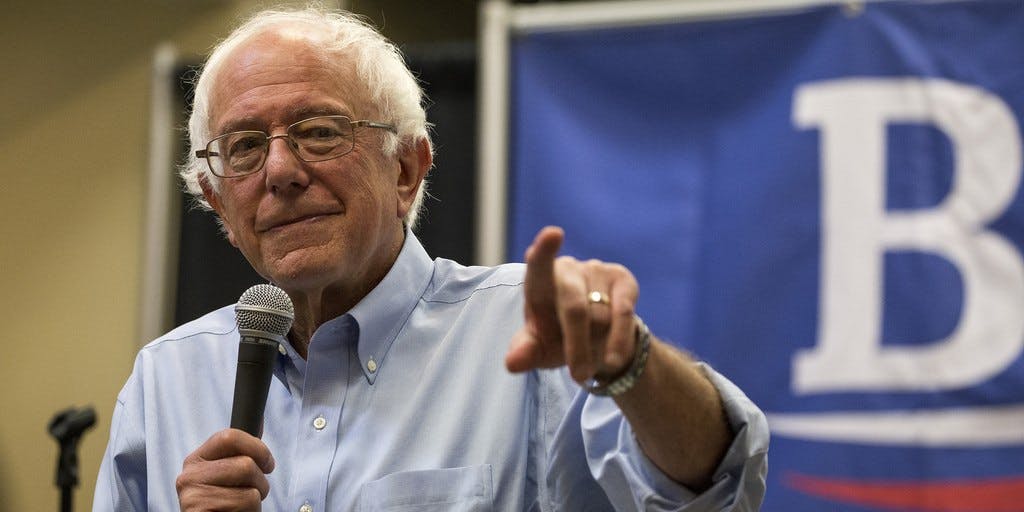 As an Independent senator of Vermont, Sanders has consistently voted down DOMA and other measure designed to keep marriage rights limited to heterosexual couples. His recent track record on LGBT rights is firm: Sanders voted to pass the Employment Non-Dsicrimation Act (ENDA) in 2013 and co-sponsored the Student Non-Discrimination Act as well.

HRC awarded Sanders a 100 percent perfect score on its Congressional Equality Index, which is unsurprising considering he’s been on the forefront of the political push for LGBT equality since as far back as the 1970s—when few politicians were willing to even address the existence of homosexuality.

Hillary may be the favorite, but there’s no doubt that Bernie has been far more consistent on LGBT rights throughout his career. Way back in the early 70’s, Sanders wrote a letter calling to “abolish all laws dealing with abortion, drugs, sexual behavior (adultery, homosexuality, etc.).” As mayor of Burlington, Vermont, Sanders ushered in the city’s first pride parade. And after he became a state lawmaker, he helped pass early civil-union and same-sex marriage laws. One of the earliest adherents of LGBT rights, Sanders has a track record that’s hard to beat—especially when you factor in 20-year-old videos of him going off on another congressman for using the term “homos.” 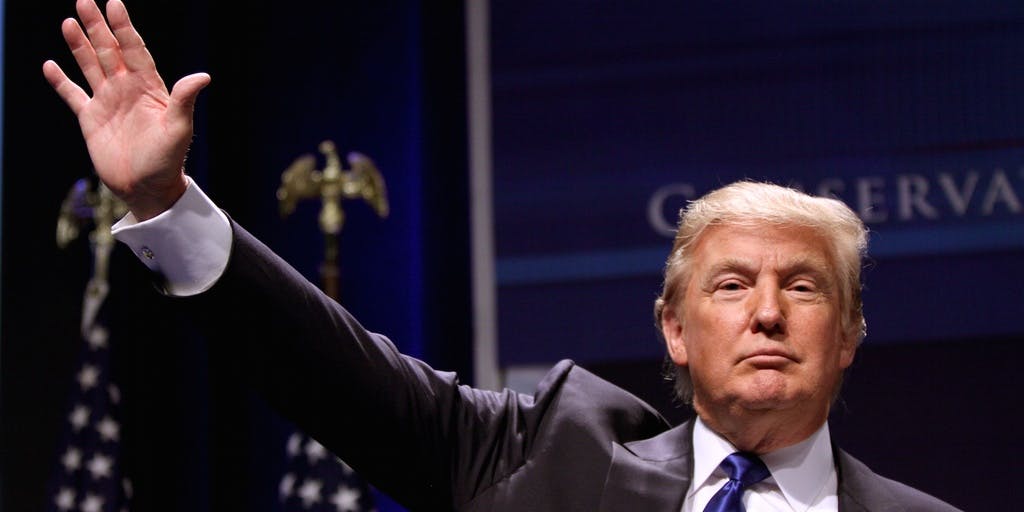 While some voters may still be recovering from the shock of learning that Donald Trump is leading in the GOP voter polls—much less running for president at all—the possibility of his running the country becomes more real each day.

Though critics have bashed his plan to ban foreign Muslims from entering the U.S. and his idea to force American Muslims to carry special identification have earned him comparisons to Adolf Hitler, Trump’s views on LGBT rights are far less controversial.

That said, Trump’s views can’t exactly be described as inclusive. He’s stuck to his mantra of being “against gay marriage,” has criticized other GOP candidates for even accepting funds from philanthropists that support LGBT rights, and he hasn’t made any campaign promises that would benefit the LGBT community.

Though HRC has called Trump “unclear” on the issues, some LGBT people have come out in favor of a Trump presidency—including one man who tried to set up a Gays For Trump website and found the domain name was already taken.

The community’s support for Trump seems rooted in the fact that he remains among the least-worst option of the five leading GOP candidates; three others are vehemently anti-LGBT, whereas Trump has expressed some support for anti-discrimination laws in the past and has admitted to attending a same-sex wedding or two. Trump is second only to Jeb Bush in showing relative support for LGBT rights. 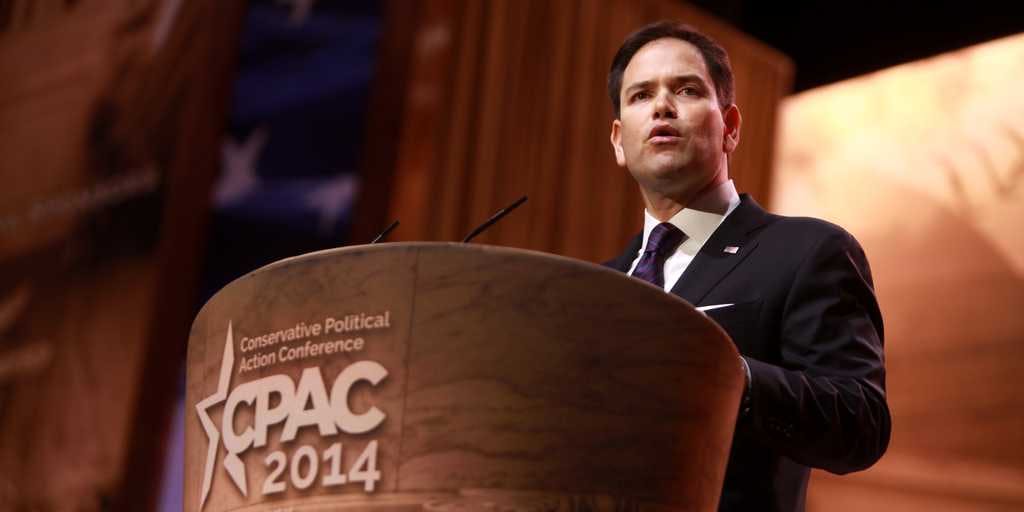 Florida Sen. Marco Rubio has been called the establishment favorite and the most electable GOP contender. He’s also the most anti-LGBT of the top five—which is saying a lot, considering Sen. Ted Cruz (R-Texas) is usually just below him in the polls. Cruz talks frequently about being against same-sex marriage, but Rubio has gone a step further and outlined his plan to reverse it by installing conservative Supreme Court justices.

Clarifying his plan on Meet the Press earlier this month, Rubio claimed that the U.S. Constitution doesn’t give the federal government the power to regulate marriage, and that “states have always defined marriage”—a misread that Politifact rated “half true” in its analysis.

Rubio proved the extent of his obsession with gay marriage by threatening to kill his own immigration bill if it was expanded to cover same-sex couples. He also opposes LGBT adoption, saying children “shouldn’t be forced to be part of a social experiment.” 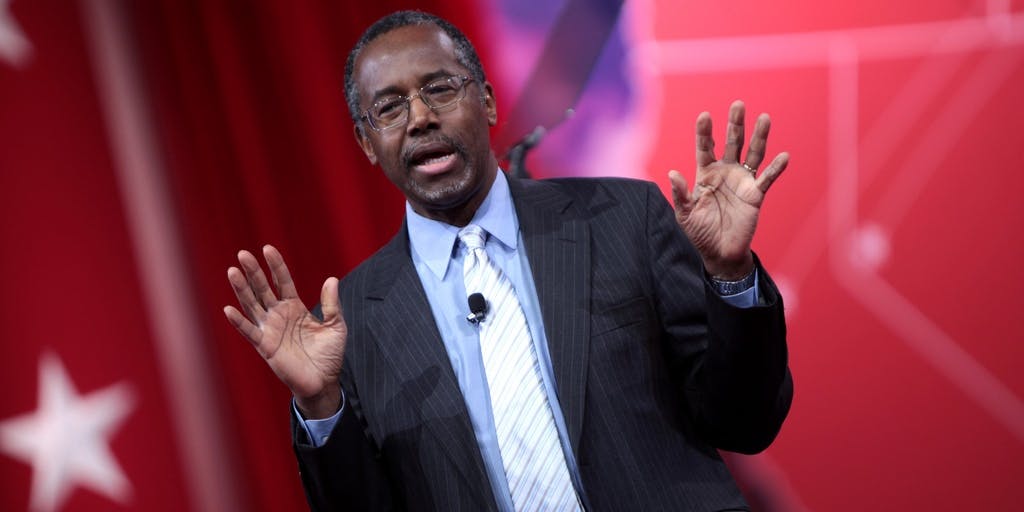 Carson has been vying for the top spot in the polls off and on throughout the fall, but has since struggled to gain ground. He’s topped every other candidate, including Democrats, in likability polls, which is interesting given his often-bizarre statements that frequently aren’t grounded in fact.

When it comes to LGBT rights, Carson is just… weird. He’s suggested that marriage equality will lead to polygamy, pedophilia, and even bestiality. He thinks prison makes people gay. He’s criticized LGBT military personnel for “flouting” their sexuality at work (we think he meant flaunting, but who knows). He thinks that transgender people “make others uncomfortable” by peeing in bathrooms.

And yet Carson, like Trump, has stuck to his support of LGBT rights in the workplace. He’s declared that he supports “rights and Constitutional protections for gay people,” which could be interpreted as anti-discrimination protections—or even marriage equality—depending on how you view the Constitution. He’s apologized for some of his more ridiculous statements (maybe prison doesn’t make you gay after all). In short, Carson isn’t hell-bent on eradicating civil rights the way that Rubio and Cruz are. 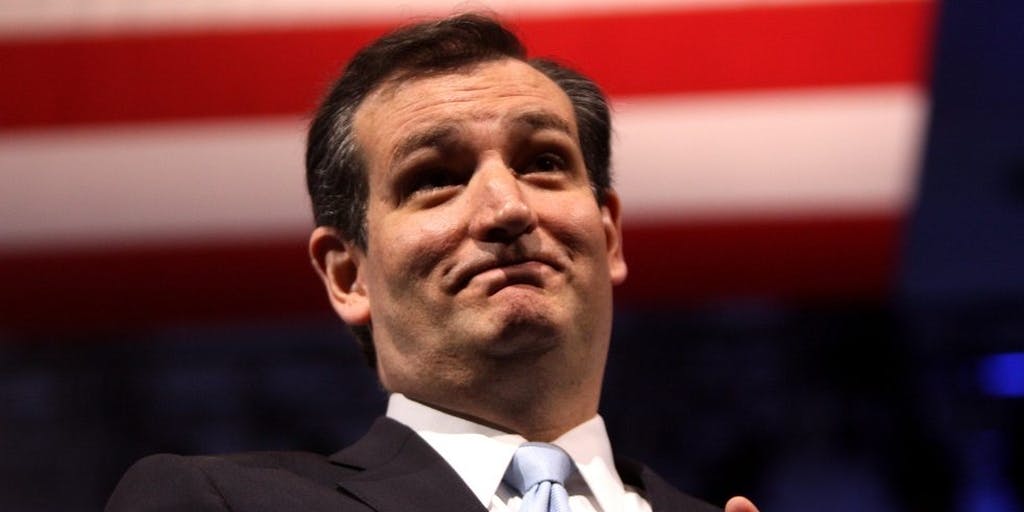 While Rubio perhaps poses a more defined threat to LGBT rights, Cruz has become a poster boy for homophobia and transphobia. His campaign seems aimed at the segment of the American population that has little patience for gay marriage and the increasing visibility of transgender people.

A central column of Cruz’s platform is the defense of “religious freedom” and its application as an excuse for anti-LGBT discrimination. He called the SCOTUS marriage equality ruling the “very definition of tyranny,” and he believes that “there is an onslaught right now in this country to tear down traditional marriage.”

One of Cruz’s latest platform points has been the topic of transgender people using gender-specific bathrooms. Misunderstanding the very definition of transgender, Cruz has expressed panic over the idea that “little girls are being forced to shower with little boys.” He also professes ignorance of studies showing that sexual orientation might be genetic, sticking instead to his belief that “engaging in homosexual conduct is a choice.”

The thing that truly sets Cruz apart from the other leading Republican candidates is his disapproval of pride parades. While discussing his own anti-LGBT track record as former Texas solicitor general (Cruz once blocked a gay Vermont couple from obtaining a divorce in Texas), he mocked a Texas mayor for attending the local parade.

“When the mayor of a city chooses twice to march in a parade celebrating gay pride, that’s a statement, and it’s not a statement I agree with,” Cruz said. 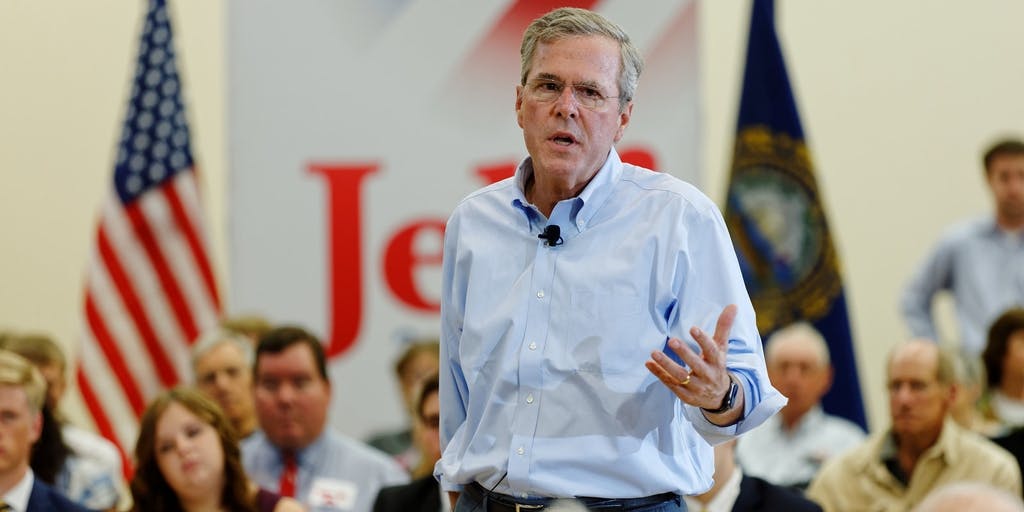 If the polls are to be believed, Bush doesn’t stand a chance of actually winning the GOP ticket. That’s bad news for supporters of LGBT rights, as the former Florida governor has the most moderate views of any of the GOP candidates. Sure, he wrote an editorial for the Miami Herald in 1994 that questioned whether “sodomy” should be “elevated to the same constitutional status as race and religion.” But his campaign has declared that he’s “evolved” in the 20 years since.

In a departure from the typical GOP stance, however, Bush has also gone out of his way to declare support for some LGBT rights. At a San Francisco campaign event in July, he said, “I don’t think you should be discriminated [against] because of your sexual orientation. Period.” He’s also called on Republicans to “move on” from the fight to reverse marriage equality, saying the case is settled.

Where candidates like Cruz and Rubio demand that Christians be allowed to opt out of non-discrimination and marriage equality, Bush has gone so far as to admonish florists who refuse to supply same-sex weddings, saying, “You should be obligated to sell them flowers. Doing otherwise would be discriminatory.” It’s statements like these that led to the Advocate crowning Bush “the most pro-LGBT Republican presidential candidate” in the 2016 race.