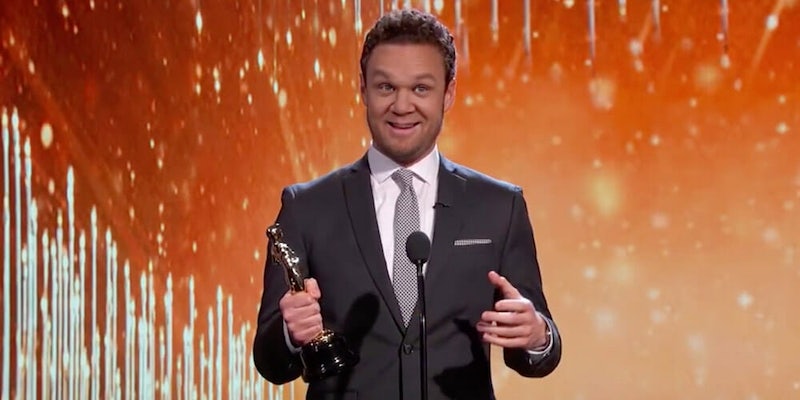 An impressionist morphed into 11 different celebrities in this deepfake

Actor Ross Marquand transforms into some of Hollywood's biggest names.

A new deepfake is pushing the boundaries of technology by featuring the faces of 11 different people in one video.

Produced by prominent deepfake creator VillainGuy, the clip is based on American actor Ross Marquand’s 2016 appearance on Jimmy Kimmel Live, in which he impersonates nearly a dozen celebrities. Yet in VillainGuy’s deepfake, Marquand transforms into every celebrity he mimics.

Here it is everyone, make sure to visit the YouTube link for the full video!
11 Celebrity faces swapped onto the incredibly talented @RossMarquand during his impressive impersonation run on @JimmyKimmelLive @jimmykimmelhttps://t.co/QHGpoxhEIl pic.twitter.com/WGONsmxwxE

The deepfake even caught the attention of the man himself.

“The internet is a scary and amazing place,” Marquand wrote on Twitter, along with the hashtag “Black Mirror” and a link to VillainGuy’s creation.

So, a few years ago I appeared on @jimmykimmel and performed several #impressions for #Oscars season and someone did a masterful #deepfake of it. The internet is a scary & amazing place, folks… #BlackMirror https://t.co/Xhvs6gqICz

Deepfakes featuring impressionists and multiple faces aren’t new. A video of comedian Bill Hader transforming into Arnold Schwarzenegger during an impression of the action star last month has gained more than 6 million views on YouTube. VillainGuy’s clip appears to feature the most faces of any deepfake video yet.

Speaking with the Daily Dot, VillainGuy, who previously made headlines for his super-realistic deepfake combining actors Steve Buscemi and Jennifer Lawrence, stated that it was actually the Hader-Shcwarzenegger mashup that inspired his latest creation.

Deepfake videos are made using publicly available tools that rely on artificial intelligence. Once images or videos of individuals are fed into the program, the technology analyzes faces in order to digitally attach them to the body of someone else. The technology can even be used to make it appear as if someone said something they never did. For instance, a recent deepfake made Facebook CEO Mark Zuckerberg brag about stealing billions of people’s data.

Given the number of people used in the video, VillainGuy said his deepfake took significantly longer to create than most. Even so, the entire process from collecting media content to publication took just one week.

“I feel that this is my best so far, for sure,” VillainGuy said. “There are some things that could have been better but overall for 11 separate swaps in one video, I’m super happy with it.”

VillainGuy notes, however, that the face of Busey “was pretty difficult.”

The video comes just one week after lawmakers and experts warned, during a House Intelligence Committee hearing, that deepfakes pose a national security threat ahead of the 2020 presidential election. Politicians fear that such a video could be used to target a presidential candidate and interfere in the democratic process.

While such an incident has yet to occur, an artificial intelligence tool–that creates pictures of non-existing human faces–is believed to have been used by a foreign spy to connect with targets on LinkedIn. The technology is also rapidly advancing, with some tools only requiring a single image of an individual in order to create a basic deepfake.

Although a major focus has been placed on the technology’s potential for misuse, deepfakes are already being used for good by museums and health organizations.