This was more than we bargained for.

This story contains explicit content that may be NSFW.

It was midnight, and I was in Harlem, trying to buy drugs from a stranger I met on a secret-sharing app. But he wasn’t interested in my money.

When I started chatting with the drug dealers of Whisper, an anonymizing social platform that’s also host to tales of infidelity, live reports from police standoffs, and gossip among closeted gay frat bros, it was in the hopes of writing a story about what had led them to that life. The app allows users to initiate a private chat by clicking on any given confession and messaging the person who posted it—an opportunity for unvarnished honesty (or the precise opposite) between individuals who probably won’t ever meet.

It immediately struck me that many people who admitted to dealing drugs felt it was their only means of survival, and that regular jobs left them financially struggling. One told me that he didn’t know what else to do with himself.

That people peddle illicit substances to support families, put themselves through school, or get back on their feet after some calamity was widely evident here. It was also clear that these admissions carried a whiff of subtext: Contact me if you’re looking to get high. How easy, then, would it be to score weed, coke, or pills via Whisper roulette? I resolved to find out. But Whisper wouldn’t make it easy for me. Head of News Slade Sohmer laid out company policy regarding potentially illegal transactions:

In order to protect our users’ privacy, Whisper does not monitor any private communication between users. However, public solicitation of any kind violates Whisper’s terms of service, therefore any and all posts that advertise criminal activity are swiftly removed by our robust team of moderators to ensure community safety.

Feeling safely anonymous in my apartment—this was before the hullabaloo over Whisper tracking its users’ locations—I sent out a flurry of posts that expressed my immediate need for intoxicants. “Dying for weed, who can help me out,” I wrote in the first, mimicking strung-out pleas from other users. The chat reply I received was puzzling, to say the least: “asl.” As in: age, sex, location. The last of these details made sense in the context of a drug deal, but the query augured a different conversation indeed. Unsurprisingly, this person went silent when I told them I was a 29-year-old male. Frustrated, I tried to clarify my terms and aims in the next post: “Gotta get stoned tonight. Have $$$. Meet you wherever.” Surely no one could fail to understand this brusque, businesslike language, even if it invoked a criminal element? Soon enough, I had my disappointing answer.

“Hey,” someone said. This time I was cagier, revealing just my whereabouts. It didn’t matter. “Can I see u,” the maybe-dealer asked. “Really just want weed if you’ve got,” I reminded them. “But let me see u,” he—and it surely had to be a he—insisted. I pushed back: “Why, I don’t get it.” When he didn’t respond, I tried to come clean: “I’m a dude btw.” The next two approaches to my conundrum suggested that I was misunderstanding the Whisper community entirely. This wasn’t just any old black market—it was a fluid barter economy where money meant little and IRL hangouts were prized.

Having confirmed that we were both in Manhattan, one person said, “I just finished … if I smoke again or tomorrow I could hit you up.” Another, when I posed as a tourist staying in Chelsea, advised me to check spots on West 23rd Street and in Union Square where open-air dealers could often be found. 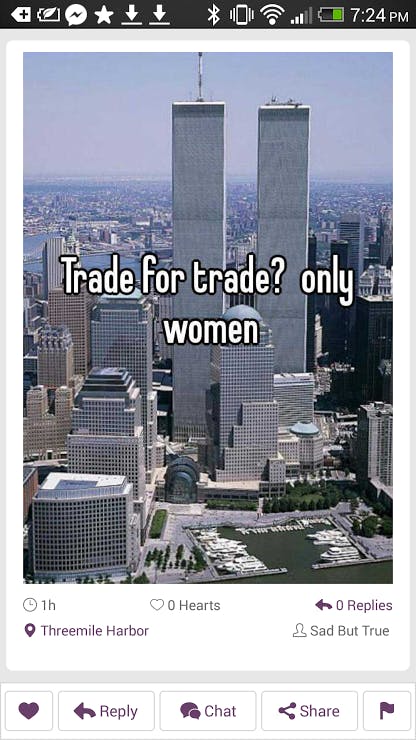 I widened my search, scanning for more unorthodox opportunities. The guy who wrote “Any women looking for trade for trade” wouldn’t talk unless I revealed myself. Local users bragging about getting high at that moment didn’t seem to care that I was trying to invite myself over. Someone soliciting with the message “Any ladies want to make some dollas?”—when convinced I was a young woman from Brooklyn—said that he was seeking “a massage … maybe some mutual touching if your [sic] comfortable with that.” I inquired as to whether he had any weed to sweeten the deal. “Yeah,” he said. “Interested?” I sent out a new post that blatantly offered sex in exchange for cocaine. Swing and a miss. Directness wasn’t working any better than a casual attitude. I wanted to see if anyone was having an easier time figuring out the slippery mores and customs at work in the scene, so I questioned users who, like me, were calling out for a dealer. Had they ever found a line to actual drugs like that? “I wish,” one told me. “Idk this is my first time looking lol and so far two people have messaged me,” said the second. So there was hope of a deal, but what kind? It was around then that I had an unsettling encounter. I’d flatly stated at some point that I was “desperately seeking dope,” and a user came back with: “What will you do for it.” I pressed him: Did he have something specific in mind? “Not yet. That depends on you.”

My final Whisper proved the most effective, likely because it was so relatable: “desperate to find a new weed dealer, last one was too sketchy.” It didn’t hurt that the app attached a photo of an attractive female casino dealer.

“How old are you?” someone asked. I assured this person I was a woman and in my early 20s. The usual pic request followed. “You’ll only sell to me if I’m hot or something?” I wrote. “Lol. No. It just weeds out a lot of liars and fake people.” I said I was a reporter and curious about whether he had built a clientele in this fashion. “I’ve only sold to one person and they didn’t even know I sold,” he told me. “I just met up with her to smoke.” Could my missing ingredient be the possibility of friendship? “I can get u weed if u nearby,” a fellow New Yorker assured me. “I do know a lot of dealers, I don’t sell myself, well I used to. So I wouldn’t mind doing someone a favor to get them high.” He had seen lots of post about people selling, he continued. I described how much trouble I’d had cutting through the sexual bargaining; he agreed that there were a lot of dudes around just trawling for potential hookups. Even after I said I was reporting on all this, he wanted to know if I smoked pot and, if so, whether we could do so together. “Been looking for more smoking friends anyway,” he confided, adding that we could go “half and half.” He didn’t give a crap about my day job. He just wanted a bro to get high with.

The only person I talked to who didn’t seem sort of lonely said that he’d come by my place to ply his wares, just not that week: “hit me up Sunday.” But this person, too, revealed a surprising amount about their life when explaining their schedule: “super babysitting duty while my sister is visiting and she lives far away so I’m trying to spend as much time with her cuties as possible.”

After all this time messing around on Whisper in the hopes of a sordid experience, I felt like the biggest creep in the bunch. Everyone else was being themselves.