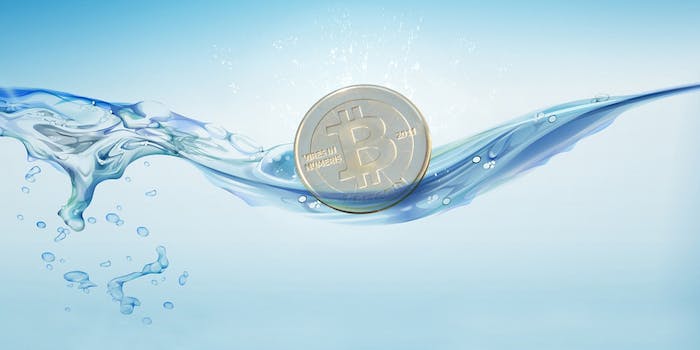 Did the operators of the one the Web’s largest black markets just get away with stealing nearly $100 million from their clients?

Did the operators of the one the Web’s largest black markets just get away with stealing nearly $100 million from their clients, or were the owners themselves the victims of an enterprising hacker?

That’s the question being asked by many of the users of Sheep Marketplace, a Deep Web site where people used the digital currency Bitcoin to buy products ranging from firearms and forged driver’s licenses to all the illegal drugs money can buy.

Launched in early 2013 and only accessible through anonymous routing system Tor, Sheep Marketplace was held up as an alternative to popular online black market Silk Road, which was shuttered in October following the arrest of its alleged mastermind Ross Ulbricht, known as the Dread Pirate Roberts.

For the past week or so, users of Sheep Marketplace have been unable to withdraw their bitcoins from the online wallet through which all transactions on the site pass. Deposits are still allowed, however.

Sheep Marketplace’s administrators initially blamed the inability to  withdraw funds on a technical glitch stemming from the implementation of an automatic tumbler—a program that effectively launders all transactions by putting everyone’s money into a single large pot and and then divvying it to the people whom it is owed. Since all Bitcoin transactions are public—although the identities of people on each side of the transaction are still anonymous—this kind of protection is increasingly seen as crucial for people doing business using bitcoins that might not technically be considered legal.

Vendors were given a set time frame for when withdraws would again be allowed. However, that window came and went without the resumption of withdrawals.

On Sunday morning, the site went down entirely, and in its place, this message was posted: 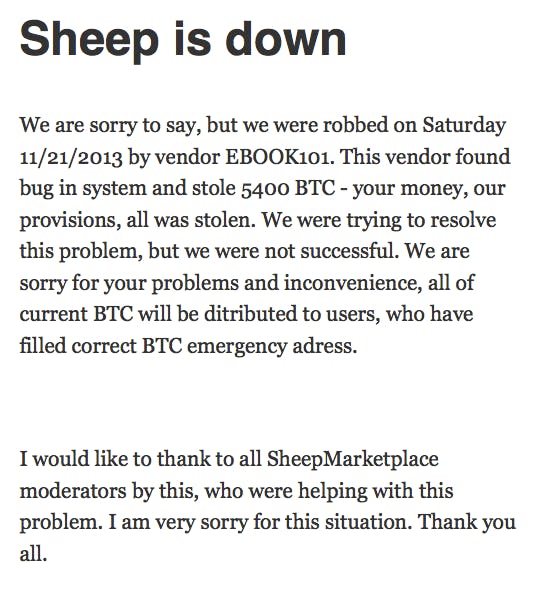 The hackers’ stated haul is currently valued at about $5.5 million.

The site is now directing users to another online black market site called Tormarket. However, according to a message published on the Tormarket site, the newfound publicity is largely unwanted.

“First of all, we are not associated with the sheep team,” wrote Tormerket. “The sheep admin is linking us on their frontpage. This is the worst PR we can get right now. Please admin remove the link. Please. And most important thing: delete all data and backups to keep the users safe.”

Even so, SheepMarketplaceScam.com, a simple, text-only webpage set up to spread the word about the site’s problems, cautions against taking Sheep Marketplace’s claims of being hacked at face value and advises readers not to use Tormarket.

In addition, SheepMarketplaceScam.com argues that the behavior of many vendors during the interval between the date Sheep Marketplace claims it was hacked and the date of its shutdown are indicitavie of a large-scale fraud:

“Most damning, several vendors who are admins, moderators, or closely affiliated with admins, are reported to have suddenly started doing something which is very frequently seen in drug market cons: Offering far larger quantities than they ever have before, at unusually low prices (50% or less than their previous pricing), and requiring FE (immediate and upfront release of funds to them rather than going through escrow). Frequently done to rope in the maximum amount of hopeful suckers before bailing with the money.”

A recent Hacker News post pointed to the presence of a Bitcoin wallet allegedly connected to the site containing 39,918 bitcoins (just over $45 million U.S.), the same amount of money supposedly missing from Sheep Marketplace.

In the days before its closure, Sheep Marketplace took down its forum where users had become increasingly vocal about not being able to withdraw funds. Site administrators blamed the takedown on an outbreak of unwanted posts and claimed they temporarily took the forum offline to install a spam filter.

Before the forum was taken down, one of its moderators posted about how even many of the people involved in the daily maintenance of the site’s forums were hung out to dry:

“The f*cking admin has disappeared. All people thinking us f*cking mods in on it and we had no idea. We have no access to anything at all. All we can do is ban users and delete forum posts. We also lost everything. Invested so fucking much. No job, no security, now in f*cking huge debt all because of “honest” promise of pay. I stil have some kind of hope, but it’s running out fast. I really really f*cking hope this is just life problems for the admin team, but I have no idea. Thanks man for your support. This is a total f*cking disaster though by the looks of it.

“I’m so f*cking sorry for everything I’ve said in the past. I got scammed just like every other f*cking person. Scared for my f*cking life now people trying to f*cking dox us because they think we’re in on it. F*cked up man f*cked up.”

As a result, some Sheep Marketplace vendors took to the listing page of the site itself to warn prospective customers away from imitating any transactions.

This particular listing, which previously advertised high-quality Dutch marijuana, implores readers not to deposit funds. ‟People claim vendors have been able to withdraw. No vendors we know have managed this,” the post reads. ‟Do not pay a vendor unless they confirm they can withdraw. I guarantee you will have a hard time finding one.”

Reddit user u/sheepreloaded2 has spent the last few days using information publicly available on Blockchain, a website that shows details of every Bitcoin transaction in existence, and has located a massive Bitcoin wallet that he or she believes belongs to whomever absconded with all of Sheep Marketplace’s money. The wallet, which was only found after tracing transactions through dozens of other dummy accounts, contains 96,000 bitcoins—a haul currently valued somewhere in the neighborhood of $95 million.

Anonymous Deep Web sites like Sheep Marketplace have been held up as a haven for those wanting to do business outside the reach of the law. However, these recent problem demonstrates that, while these sites may make conducting drug deals seem as easy as selling old baseball cards on eBay, transacting through the black market economy still carries the same risks it always has. People who get ripped off can’t can’t go to the police, and there are no recall mechanisms for sales that don’t pan out.

Even so, the rules of capitalism are still in effect, and Sheep Marketplace’s loss may be another site’s gain. The operators of Three Hares Bazaar, a similar Deep Web black market, have offered free spaces to vendors who were ‟scammed” by Sheep Marketplace.

Whoever took Sheep Marketplace’s money, the theft could have some very serious consequences for many of the site’s former users.

In a post on Reddit’s r/SheepMarketplace community, one user recounted his current situation.

‟I am a large vendor on Sheep Marketplace, or I was until recently. I sold hard drugs in reasonably large quantities. I have around $90k locked up in the site. I owe some money to some very nasty people.” wrote someone going by the handle u/FearingForMyLife. ‟Due to the way I foolishly structured my business, I now owe them a considerable sum of money. Today I was reminded that it’s enough money to put my life in jeopardy. My contacts have not been understanding about this situation with Sheep market. They only sell offline themselves.”

‟I am scared. I am praying to god that somehow Sheep is not a scam and I can get the money in time for them,” u/FearingForMyLife added. ‟I have until [sic] monday evening. They have already threatened me with death. I have no doubt that they have killed before…I am 26 and I don’t want to die. I am crying, shaking, and in tears. There is no escape.”

While that account is unverified, it paints a devastating portrait of the real-world implications of such shady Deep Web deals.

Patrick Howell O’Neill and Austin Powell contributed to this report.