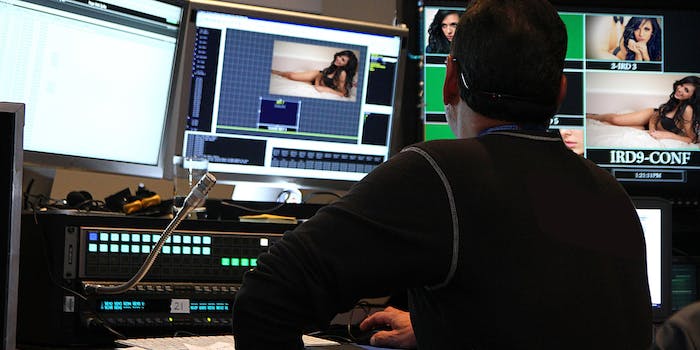 This is how men make money pretending to be camgirls online.

With your PayPal account loaded with cash, your private striptease begins. The woman in the livestream, a 20-something brunette wearing a tight white tank top and knee-high socks, gives you a little giggle and a wave. You tip her $20, and her clothes start to peel off, one sock at a time, just like you asked.

You’ve just become the latest victim of eWhoring, a lucrative scam that targets both adult cam models and viewers who are unlikely to ever admit they’ve been hoodwinked.

“Basically you’re scamming your victim, using pictures or videos of a girl, claiming you’re the girl on cam,” one scammer wrote about the ploy. “EWhoring can get you some serious cash.”

“They’ll never take legal action because of the damage it could cause to their real life reputations.”

Today, eWhoring scammers have gone high-tech, with new, easily accessible tools that allow users a surprising level of control over the actions of a model in a controllable, pre-recorded video. Both the targets of this fraud—ideally well-off men willing to pay hundreds of dollars during a single cam session—and the women, who are often recorded without their permission, are victimized by this scam.

The illusion of a live cam show is accomplished by manipulating footage of models found online, or by paying a model for a cam session and covertly recording her. In the latter case, the models are asked to perform different gestures and actions, such as waving at the camera, standing up, turning around, and of course, taking off their clothes.

These gestures and actions are then cut into smaller video clips, often called “packs” or VCWs, which are then loaded into Flash Player. As the video begins, the scammer is prompted with various commands—wave, smile, flash, etc.—that trigger a clip of the model performing whatever action the victim requests.

To prevent a video from jumping and appearing fake, it’s often chopped into a near seamless loop. If the video does skip, it just appears as if it’s buffering.

An eWhoring control panel in action

“It’s quite successful, once you get the hang of it,” writes one blogger, who also suggests where users can find galleries of nude women to sell on Craigslist and Backpage. “People say they make about ‘a dollar a minute,’ and considering you have to do very little, it’s quite easy,” he adds.

EWhoring scammers often find their victims through spam emails or the chat rooms of sites like Cam4 or Chaturbate. From there, they convince their targets to join them in a video chat on a service like Skype or Kik. That’s when they launch the VCWs.

In one guide, scammers are cautioned about the psychological harm they may experience due to “inappropriate messages and pictures” from their customers. 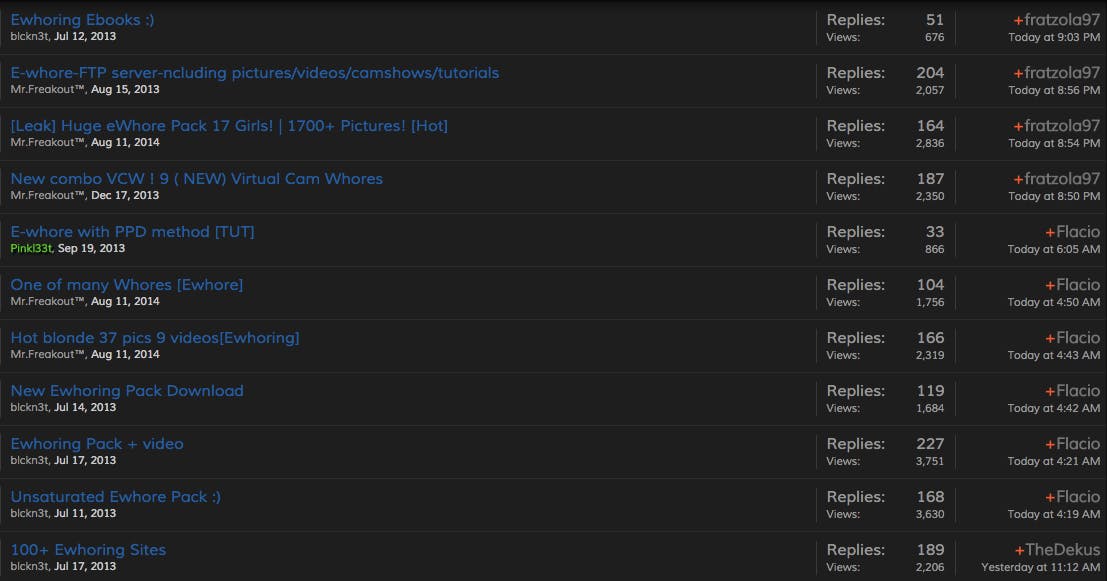 While the legality of eWhoring differs depending on where you live, impersonating someone online can carry heavy penalties. In New York and California, for example, an eWhoring scammer could be hit with a misdemeanor charge, thousands in fines, and a year in jail. Do the same thing in Texas, and you’re looking at 10 years behind bars.

Different eWhoring methods are listed on hacking and social engineering forums around the Web, and some YouTube users have even set up how-to’s on the scam.

The video packs can be purchased or traded on countless sites. In some cases, users are advised on how to process transactions using stolen PayPal accounts that can usually be acquired for $10 or less—a paltry expense if the tales of wild profits are to be believed.

Receiving payments through PayPal isn’t the only way eWhoring scammers make money. A user at the hacking site Black Hat World recommends signing up for an affiliate program with a marketing company called CrakRevenue. “They also provide you with software,” the user claims. According to the company’s website, affiliates make a 5 percent commission each time they convince someone to join one its client’s websites. The company is recommended as a profitable resource on dozens of Black Hat World posts.

CrakRevenue did not respond to our request for comment in time for publication.

In a similar post, a user who claims to be with an affiliate program says eWhoring has been his “only source of income” for two years.

Advice from a so-called “professional”.

“There are thousands of people doing this not only to make money from the initial contact with a victim, but to extort them for additional payments,” says an online security researcher familiar with the scam, who asked not to be identified by name. Blackmail is common, he says, if the scammer figures out who the target is, especially if he is married or has children.

The scammers, too, are frequently unmasked, the researcher says, because they use email addresses or payment methods connected to their real names.

“They’ll never take legal action,” the researcher says of the victims, “because of the damage it could cause to their real-life reputations.”