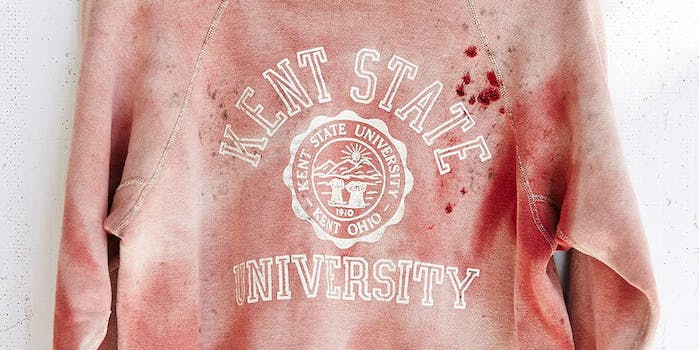 How did no one notice this?

Urban Outfitters has featured plenty of controversial clothing options before, but a new Kent State sweatshirt just might take the cake.

In May 1970, the Ohio National Guard killed four students and wounded nine more on Kent State University’s campus, some of whom were partaking in a peaceful protest of military operations being implemented during the Vietnam War.

According to the website, it’s “washed soft and perfectly broken in.”

The item did not go over too well.

Urban Outfitters sells a Kent State sweatshirt with blood stains and bullet holes. I am disgusted with humanity. pic.twitter.com/mMbhwT6NDh

I ask #urbanoutfitters to not sell this offensive shirt that mocks the tragic May 4th shootings at #KentState. pic.twitter.com/ro6qMkrjRL

Urban Outfitters are selling a “vintage” Kent State jumper, blood splatters and all. Nothing says “hip” like murder. pic.twitter.com/tq63ONAniq

The shirt is already sold out, but you can still purchase it on eBay. Bidding starts at $550, but for $2,500, you can buy it as soon as the seller receives the shirt from Urban Outfitters. The seller plans to give 50 percent of the proceeds to the Southern Poverty Law Center, a nonprofit that seeks justice for “the most vulnerable members of our society.”

“I ordered it and am waiting myself, as soon as it arrives, I’ll ship it to you,” the seller wrote. “Perfect for Halloween or whatever your deal is.”

Urban Outfitters has already released a statement through TwitLonger, apologizing for the Kent State sweatshirt and stated that it has removed the shirt from its website.

Urban Outfitters sincerely apologizes for any offense our Vintage Kent State Sweatshirt may have caused. It was never our intention to allude to the tragic events that took place at Kent State in 1970 and we are extremely saddened that this item was perceived as such. The one-of-a-kind item was purchased as part of our sun-faded vintage collection. There is no blood on this shirt nor has this item been altered in any way. The red stains are discoloration from the original shade of the shirt and the holes are from natural wear and fray. Again, we deeply regret that this item was perceived negatively and we have removed it immediately from our website to avoid further upset.

We’ve sent the seller a request for comment and we’ll update if he or she responds.