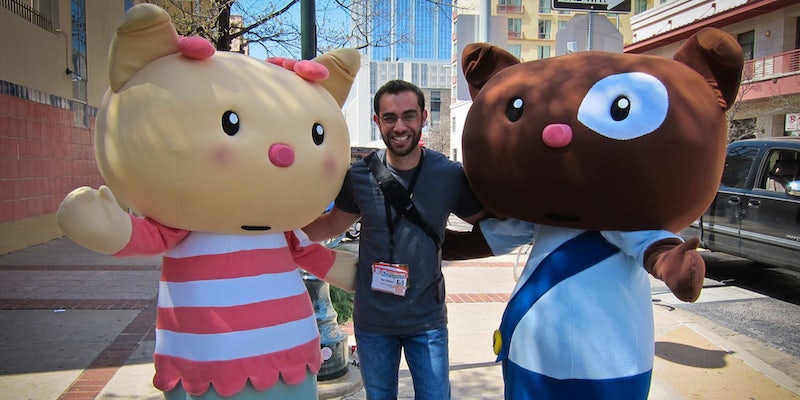 The sharing economy of SXSW

South By Southwest is very near to collapsing upon itself. The interactive, music, education, and film festival is so all-encompassing that practically  can find a reason to be there. For the month of March, the city of Austin becomes a swarming hive of activity—searing heat and occasional downpour no match for the crowds and free swag that have descended upon downtown.

It’s a surreal world, one that some in Austin actually want to escape from.

“For a week, the city becomes… unusable,” a friend who lives there tells me. “It’s full of the worst of everything.”

Fair enough. Imagine if your town was taken over by vagrants who claimed to love your cool-kid culture but were scarce come April when the shows and their various degrees of celebrity up and left, to say nothing of the insane traffic and price surges.

That desire to head for the hills has turned Austin during SXSW into a sharing economy market, one where residents rent their homes or just rooms to visitors on Airbnb and Craigslist.

A quick scan of the sites will reveal that homeowners (and renters) in the area are happy to give up their abodes for hundreds, even thousands of dollars. To wit, two colleagues and Ince shelled out a decent amount of money to stay in a one-bedroom apartment that was a 20-minute walk from downtown. “Why not bum it with friends for a week?” the host of the apartment told us at the time, describing his own plans.

This year things are a little different. Just last week, the city of Austin announced it would be cracking down on short-term vacation rentals. It was effectively a warning that the same penalties afforded to Airbnb in New York would be coming to the Texas town as well. Residents are required to have a renting license, and while this has been true since 2012, it’s now going to be more strictly enforced; and what better time to be enforcing than during SXSW? Local authorities are encouraging people to call in any suspicious behavior as well.

Still, home rental sites enjoy huge spikes in Austin rental prices during the festival. According to CNBC, locations that usually rent for $250 can rent for all the way to $650 during SXSW. For some, it’s become a full-time gig.

“I’ve been renting out to travelers and festival-goers for about 10 years now,” Airbnb user Flip told me. Flip has narcolepsy, and he says that having the option of renting via Airbnb has been a life-saver. “Over time renting out my own properties and others’ has become my regular job.”

Others are more reticent to rent because of the restrictions the city is making an effort to enforce. “We are actually not going to rent the house any more this year due to the new Austin City regulations for short term rentals,” an Airbnb user named Rob said.

Room rentals aren’t the only way for Austin locals to profit, though. RelayRides, a car-sharing network, says it enjoys an uptick in demand during SXSW.

And what about Lyft, the true democratic ride-sharing service? Technically, such a thing is not allowed in Austin (which is why Uber isn’t there either). But leave it to Lyft to come up with a creative solution to help the city cash in on SXSW: Last year, Lyft had people offer piggyback rides, just to drum up some name recognition. This year the company is holding LyftRecess, which will feature special appearances from Lyft drivers (really) and give ride credits to attendees.

Will the city of Austin be lost to a sea of obnoxious, cooler-than-thou weirdos for the next two weeks? Perhaps. But will that city reap the rewards of their desperation to be part of it? To the tune of $218.2 million, according to an economic analysis of last year’s event. And that’s not even taking into account the off-the-books deals that transpire on Craigslist and elsewhere.

I’m sorry Austin, but at least during SXSW, you’re a shining beacon of the sharing economy. I promise I’ll leave soon.