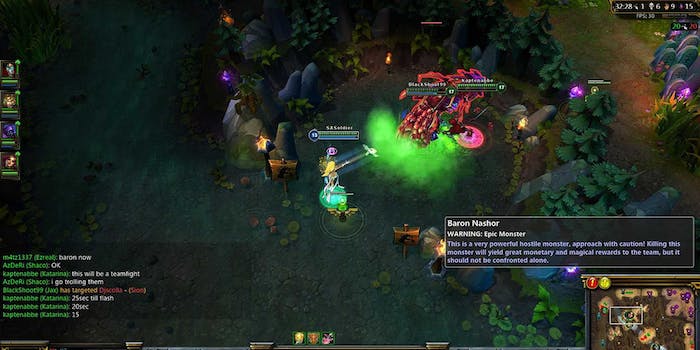 Pro gamers are officially athletes, according to the U.S. government

International pros can now get visas to come to the U.S. for gaming competitions.

Competitive gaming is one step closer to being recognized as a legitimate sport.

The policy shift comes after much lobbying from Riot Games, creator of League of Legends and a promoter of e-sports tournaments.

“The [League Championship Series] itself is now officially recognized as a professional sports league, just like the NBA, NFL, NHL, etc,” Riot Games spokesman Chris Kramer told the Daily Dot. “Pro players can now apply for a P-1A Visa in order to come to the United States.”

Two players have already applied for e-sports visa. Danny “Shiphtur” Le has moved from Canada to play with Team Coast, a North American LCS team based in Southern California. Meanwhile, Edward Abgaryan, an Armenian citizen, has moved from Russia to join Team Curse in Las Vegas.

Kramer says the government’s decision essentially redefines the legal definition of what an athlete is to include those who take part in digital contests.

“Riot has always maintained that e-sports competitors operate with the same level of training and specialization as athletes and the company was very pleased that the government agreed,” he said.

This redefining of the term “athlete” has sparked a spirited debate online. The comments section on a Gamespot article about the new visa rules is filled with opinions from both sides. Some argue that there is no inherent “athleticism” in virtual gaming. But user DMND points out that shooting is an Olympic sport that requires roughly the same skills as a video game.

Reddit has long been the forum for debating the topic of whether gamers are “real athletes.”

“If playing a game you love competitively is a waste of time then so is chess,” writes Reddit user Syntic. “Or football for that matter. Just because E-Sports doesn’t have the financial infrastructure yet that major league sports do doesn’t mean its not viable.”

This could be a major step forward for e-sports in the United States. Perhaps it could one day rise to the same level of prestige that gaming already enjoys in countries like Korea, where for ten years games like Starcraft have turned gamers into cultural superstars.