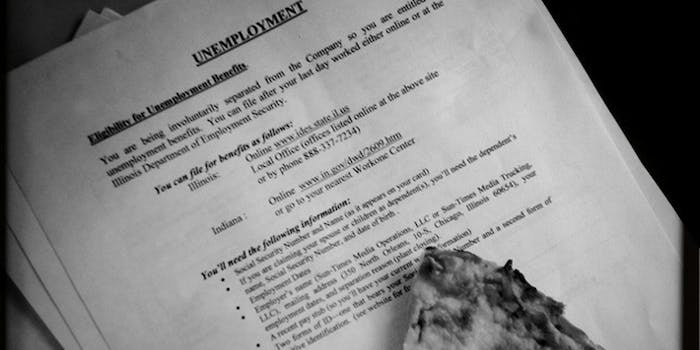 A talk with Rob Hart, the photographer behind “Laid Off From the Sun-Times”

Rob Hart was laid off from the Chicago Sun-Times as part of the paper’s much-maligned decision to get rid of its entire photo staff.

Rob Hart was laid off from the Chicago Sun-Times as part of the paper’s much-maligned decision to get rid of its entire photo staff (28 people, including Pulitzer Prize winners) and replace them with reporters with iPhones.

In his newfound unemployment, Hart has been documenting his life the only way he knows how: through photos. He started the Tumblr page Laid Off From the Sun-Times yesterday morning, and it’s already gone viral, receiving attention from others in the media and from people who relate to being unemployed. (One photo shows cold pizza on unemployment paperwork, a familiar sight to many.)

The Daily Dot interviewed the award-winning journalist and Medill Journalism School professor about the value of the Internet and the future of journalism.

DD: Were you expecting to get laid off?

RH: Anyone who works at a newspaper expects to get laid off eventually. I started 12 years ago and in the first year, I was working at a company that was part of the Sun-Times and they wanted to lay off five people and I was number five. The head of our guild took a buyout to save my job and I was the bottom person in seniority for the next few years so I knew it was a possibility. You just never think you’re going to be called into a conference room on the 14th floor of a hotel and see your hero, a Pulitzer Prize winner, John H. White, a man who has spent 44 years working for a newspaper, dismissed without even a “thank you.” It was absolutely heartbreaking to see someone of his stature walk out the door.

DD: It was surprising that it was all of you at once.

RH: It’s surprising because it’s unprecedented. Media companies are making bad decisions left and right because they don’t know what to do. They’re going to have reporters do multimedia. Changes in the business, blah blah blah, so we’re eliminating the entire department. By “changes,” they mean good content to bad content, in my opinion. I mean, who knows? They could train all these reporters and they could tell awesome stories with their cellphones. But I doubt it.

DD: Why did you start the Tumblr?

RH: I had been posting stuff on Instagram and showing it to my wife. I figured this is something that needs to get out. It’s boiling inside me. I’ve seen so many times when people don’t own their situation and I wanted to own this and tell my story and connect with other people. I’ve gotten so many emails from people today. PR people, marketing people, photographers, readers, a guy who used to deliver the Chicago Daily News who is 66 years old and saw it. I don’t know how he found a Tumblr. So many people reached out to me saying, “The same thing happened to me. This happened and this happened. Stay strong. I love your work.” I have all these new friends. The National Press Photography Association called me today and said, “We saw this. What can we do?” They’re going to do a workshop in Chicago to teach business to all the laid-off photographers, teach us contracts and copyright. I pitched them my idea to do a workshop to honor my hero, John H. White, and they said they’d help me fund it.

So it’s a lot of glorious things happening from this situation. They took our jobs, but they can’t take away our love for photojournalism. It’s what we were born to do.

DD: Your Tumblr personalizes the story of the layoff through photos. Isn’t that exactly what you do?

DD: You’ve been able to connect to a lot of people through this Tumblr.

RH: That’s the great thing about the Internet that I don’t think news organizations understand. It’s an amazing tool but it’s gotta be a two-way street and it’s gotta be real. It’s gotta have feeling. When I open up the newspapers here, it’s frustrating because it doesn’t feel like anything that makes me want to cry.

DD: Is it insulting to be replaced by iPhones?

RH: A camera is just a tool. A carpenter using a hammer and me using a hammer are going to get different results. I can use a hammer but I don’t know how to make a table. For me it’s not about the camera, it’s about the skill and the storytelling ability. I’ve had 20 years of training. I’ve developed an instinct to know when to move in and to capture the moment that you think is going to happen. Reporters use a different part of the brain. They show up and ask, “What happened?” Photojournalists show up before something happens.

We need to start teaching people to do everything. I wasn’t taught how to write a story. I developed that skill from sitting with reporters, but I have a hard time writing notes. When I write a story, it takes me a long time. I heard from a reporter yesterday who shot two features with her phone and she marveled at how much time it took to shoot the photos, choose the ones she wanted, edit the photos, upload the photos—she just had no idea how much time it took. The product of the reporting and the photography is going to suffer.

DD: Is it because they don’t know how to be photographers?

RH: How many people come up to me and say, “Oh, your camera’s nice. I bet it takes great photos.” Yeah, it does. Because I’m using it. No one would say to a dentist, “Oh your drill must do great root canals.” Photojournalists aren’t replaceable. Photography isn’t about smarts, it’s about feeling and understanding emotions. Some reporters are really good at that, but most of them aren’t.

DD: Had you ever used Tumblr before?

RH: I’d never used Tumblr. I’m 35. Tumblr is not really my demographic. When you have two jobs and a kid, you don’t have a lot of time to read. I knew it’d be an easy way to share my photos quickly from my phone, and I just got an iPhone.

DD: Tumblr’s audience skews younger. I imagine a lot of the people reading your blog are in journalism school or planning on going to journalism school. Do you think you’re discouraging them?

RH: No, no! I got laid off because they want something cheaper. I could see if you grew up in this recession, spent money to go to journalism school and then see all these great people getting laid off, that’s not discouraging. I grew up in Detroit and I loved the News and the Free Press, when I was 15 or 16, all the photographers got laid off because of a strike and I would go and make bologna sandwiches for the strikers and take pictures of them. One of the laid off News photographers was one of my first journalism teachers and even seeing that, two giant newspapers throw their staff out the door, that did not discourage me because there is so much opportunity in chaos. There are so many ways to tell your story.

DD: Safe to say you’ve had some windows open from this closed door?

RH: It’s brought our community as photographers together. It’s made me think about my work differently. If they had laid me off on a Wednesday by myself, nobody would know who I am. But they laid us all off at once, and people are pissed. I hope to keep the Tumblr up. You know, when you’re in college, you think you’re going to do a project that changes the world and then you get a job and you realize most of what I do is meaningless—high school football games or the same high school for 10 years. It’s great to do something like this Tumblr that means something to somebody. People in the community are pissed because they think of this as “my newspaper,” this is their product. I’ve realized we’re all expendable unless we start owning our content.

DD: What are you going to do now?

DD: Is money a problem now?

RH: Yes, but no. I have to buy all this new equipment because I have photo gear but I didn’t have everything I needed, because I had it at work. The day I got laid off, I had an $1,800 lens delivered to my house. I ordered it last week because the company hadn’t bought me a wide angle lens in 10 years and mine didn’t work anymore. I was willing to invest almost 2,000 dollars in making their product better and they were not willing to invest in me anymore. I think it’ll end up being a poor decision on their part, but it’s not my problem anymore. My business is running robhartphoto.com.

DD: And becoming a Tumblr celebrity.

RH: I had no idea that was a thing! But I did always think I’d be famous for my cat photography.

Photo via Laid Off From the Sun Times