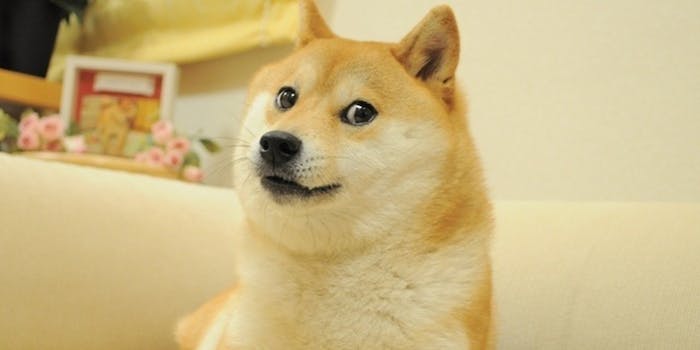 Meet the CEO who put a doge meme in the Guardian

When a London startup won £50,000 worth of advertising space, they decided to spend some of it on printing doge in the Guardian.

There was something rather unusual hiding in the Guardian’s financial pages this morning. BuzzFeed spotted that a doge meme had been printed as a mysterious advertisement.

So who was responsible for the badly drawn doge declaring “cates r ilegal” in a British newspaper?

“We got £50,000 of free advertising in the Guardian as a prize in a competition,” Damian Kimmelman, the CEO of London-based business information startup DueDil, told me. “We’re an online business, and we just did it for the sake of applying, so it was quite a shock when we won.”

“We thought that it would be funny to put it up and to see if it would actually get printed. I guess it’s hard to tie online to offline and we thought, ‘We don’t actually need the advertising,’” Kimmelman said.

So why did DueDil choose to use doge as their advert?

“Because we could draw it on Paint. I don’t know. Doge’s just funny. I like doge. We thought it would be funny, and the Guardian was pretty cool about it. They said, ‘What the hell?’ and suggested we do something different.

What will happen to the rest of the £50,000 worth of advertising money?

“We don’t advertise ourselves. But maybe somebody else does. We’ve opened it up as a competition for a small business that wants the rest of the advertising, which is really what’s in line with DueDil. If we get exposure for a small business who really could use it, then I think that would be really cool.”

DueDil have published a blog post owning up to their doge antics, and detailing a competition for small businesses to win the rest of their advertising budget. Companies can be entered by emailing [email protected].