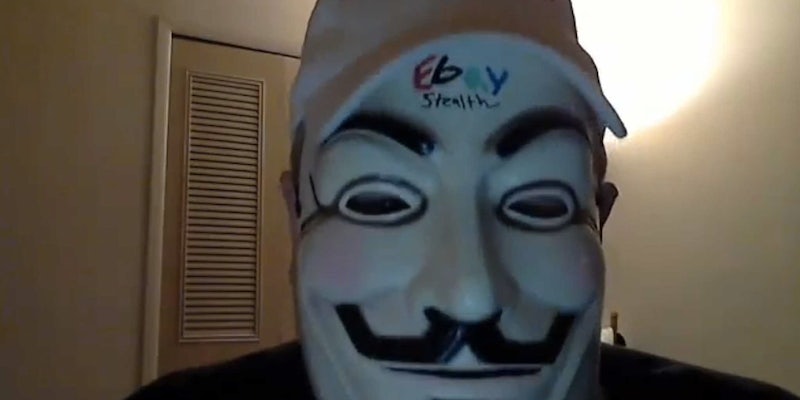 Meet Ebayisajoke, who might be the world’s only dedicated eBay troll.

Ebayisajoke’s M.O., judging by his YouTube channel, is to expose the company’s seemingly endless malfeasances: its MasterCard deal is a scam. Its payment system violates California law. Its videos use subliminal messaging. And so on. Wearing a Guy Fawkes mask and digitally altering his voice, he strikes a balance between someone whose identity you can’t immediately place and someone whose message you can’t possibly force yourself to care about.

But according to My Fox Detroit‘s Rob Wolchek, Ebayisajoke made himself impossible for a few people to ignore, as his anger at the commerce site extends to singling out individual customers and harassing them. According to Wolcheck, Ebayisajoke’s ruse is to target small business owners, outbid all other potential buyers on their page, then not pay—keeping them from making a sale. Then, to top it off, he gives them a bad review, hurting their chances at future business.

Wolchek hired professional private investigators to track down the masked man, who they identified as Chuck Fitch, a resident of the Detroit suburbs.

But as it turns out, Ebayisajoke’s real identity—assuming it’s actually Fitch, and that’s not part of a clever ruse to throw journalists off his trail—wasn’t exactly hard to find. He’d sold mp3s of prank calls to eBay, a la Jerky Boys, on Amazon, apparently a far more reputable seller. On those pages, marked clear as day, are the words “Copyright: (p) Charles Fitch.”

On his own official site, ebayblows.org, the masked man didn’t address Wolchek identifying him as Fitch. Nor did he deny the reporter’s nerd-shaming claims, like that Fitch rarely leaves his house except for fast food and to go to the theater alone. He seems far more concerned with his online persona, writing “As far as Ebayisajoke is concerned they didn’t expose anything and everything he was doing online was in fact legal.”

However, Ebayisajoke did take major issue with how My Fox Detroit portrayed one of his victims, hubcap dealer Joe DeMarco of Oradell, N.J. Ebayisajoke claimed DeMarco abuses eBay’s Significantly Not As Described buyer’s claim, which is said to let users get a free refund on anything they buy, while keeping the item.

Regardless of who’s being more truthful, there’s no reason to think Fitch—sorry, Ebayisajoke—is going to stop anytime soon. Just check the final sentence on his most recent blog post:

“Ebayisajoke is not going to give up until Joe’s business is gone off eBay, so count the few days you have left because it’s all coming to an end very soon my friend.”