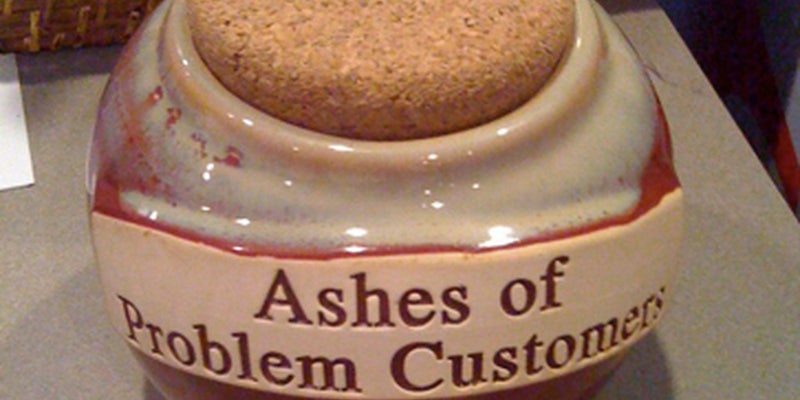 Sure, the restaurant is named Boners. But even then you'd expect better.

All Stephanie S. wanted was to share her bad experience at an Atlanta barbecue restaurant.

And all the owner of Boners wanted was to shame Stephanie S. for allegedly stiffing her waiter.

The result: one bad meal has become an all-out war from Yelp to Facebook and Twitter and beyond.

The story begins last week, when Atlanta resident Stephanie S. went to eat at the now-aptly named Boners BBQ. She used a Scoutmob discount to save some money. After a lukewarm experience, she decided to leave a two-star Yelp review.

She never expected what happened next: Her photo landed on the Boners BBQ Facebook page with the caption, “NOT WANTED!”

No matter how low your expectations are for a restaurant that sells T-shirts with “Escort Quality Hooker Pricing” written on the back, most can agree that’s pretty low.

The restaurant claimed Stephanie hadn’t left a tip as justification for its actions. However, Stephanie says otherwise; she told the Huffington Post that she left two twenty-dollar bills on a $30 check (after using her discount). According to the restaurant, Stephanie S. left no tip on a $40 check.

The payback was swift: Several Yelpers leapt to Stephanie’s defense by leaving one-star reviews for Boner’s that had nothing to do with the quality of the establishment. They comment instead on the restaurant’s public naming and shaming of an unlucky customer.

“Make sure you’re on your best behavior when you eat here otherwise they might just publicly ridicule you on their official Facebook page,” wrote one of the one-star reviewers.

Stephanie maintained the charge of stiffing her waiter was untrue.

“On the drive home I discussed my feelings about the restaurant with my husband and decided to write a review on Yelp. We decided to go there because of Yelp so I thought it was an appropriate forum to explain my experience,” Stephanie told the Huffington Post.

“I did leave a tip and my review was not scathing by any means. The response from Boners BBQ has just been astonishing to me, especially since it came from the owner of the business,” Stephanie S. told the publication.

We’ve asked Boners to provide a copy of the bill to substantiate its version of events.

Regardless of what happened, Boners’ Facebook page was bombarded with angry comments. Even after the restaurant deleted its post about Stephanie and tried to back away, hundreds of commenters let them have it.

“Looks like you chose the correct name for your spot, BONERS,” wrote Ryan Ze Lion.

Yesterday, Boners published a personal apology to Stephanie S. by owner Andrew Capron as a status update. However, judging by the comments on the post, he’s not finished atoning yet.

The latest update? Boners “thinks everyone should get back to work like we will be doing today!”