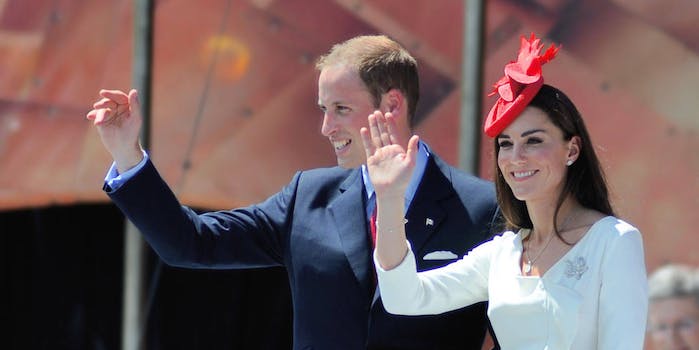 Why are we still so obsessed by the British royals?

Our national anthem may be about a battle against the British, but many American hearts, especially mine, still sing “God Save the Queen.” Americans love the British monarchy. Why is it that so many Americans are still so infatuated with the House of Windsor?

The first week of my sixth grade class, my teacher asked us to name a role model we’d like to meet. I was a working-class kid growing up between Dayton, Ohio, and southeastern Kentucky. Yet when asked to choose one person I’d most like to emulate, only one name came to mind. Her glamour, compassion, and heartache were well known in my family. My Aunt Sheila was particularly a big fan.

Her name was Princess Diana.

Aunt Sheila’s home was littered with magazines featuring Princess Diana, who, despite being born into the aristocracy, was “one of us,” she told me. The People’s Princess. Diana, I decided, was my role model.

A week later she was killed in a high-speed chase with paparazzi in the streets of Paris. Our insatiable appetite for every detail of her life lead to her death. Yet in the nearly two decades since Diana’s death, America’s obsession with the British royal family has not subsided.

We’ve spent more than 10 years watching yet another “fairy tale” unfold between William and Kate (now the Duke and Duchess of Cambridge), and we’ve followed gallant Prince Harry from wayward teen to war hero. Two centuries ago, America eschewed hereditary privilege as classist and undemocratic, now our obsession with our colonial monarchs is as palpable as ever.

Yet our royal obsession is, in part, superficial.

We love the Windsors for the same reason we love the Kardashians. The monarchy, in many ways, was the forerunner to reality TV stars: Famous for who they are, not what they’ve done and with a story which unfolds through the years against a backdrop of uttar wealth and privilege. Raised in opulence, William and Harry’s lives—from nappies to nuptials—have played out in front of the world’s audience.

Just a bunch of adorable pictures of Prince Harry with dogs https://t.co/kKn7K9yZFf pic.twitter.com/WbWdqLzKzv

The trials and tribulations have riveted us, much like an episode of The Young and the Restless. The Queen is the stalwart matriarch, and Diana was the tragic ingénue who married the charming-turned-villainous Charles, who loved his Machiavellian mistress, Camilla.

Yet like any good soap opera, villains can be redeemed, and Americans have found a place in our hearts for the Duchess of Cornwall. Harry, with his revolving door of girlfriends and his military service, is the dashing action hero. And William and Kate are the supercouple whose fairy tale romance we’ve longed for. Like soap opera characters, who came into living rooms across the country every weekday, the royals have been a part of our lives for so long that we root for them like we root for our friends and neighbours.

And it’s not just those who are alive, but those who have come before. Americans who visit the United Kingdom visit Westminster Abbey—burial site of British monarchs for nearly a millennia—in droves.

For a nation whose citizens largely descend from somewhere else, the deep ancestry the British royal family has is deeply reassuring. Unless you’re Native American, we don’t have the history or the rootedness on this continent the British monarchy provides the British people.

So we devour anything we can about them. Earlier this month, I bought People magazine simply because Prince Harry was on the cover. Given the princess fantasy so many of us harbor inside, it’s unsurprising that we project that on to actual princes and princesses.

every girl dreams of growing up and marrying a prince, so jeal of Kate Middleton :( #royalwedding where is my fairytale?

Americans grow up on a diet of Disney princess fairy tales. Snow White, Cinderella, and Aladdin were all elevated from their horrible lives by heirs apparent. Perhaps no contemporary royal epitomises this better than the Duchess of Cambridge, nee Kate Middleton. An untitled commoner, Kate and William were college sweethearts who, despite a brief breakup in 2007, gave us all hope that we could find our very own prince charming. (The desires we’ve projected onto her run so deep that we still insist on calling her by her maiden, pre-regnal name.)

That Kate is the daughter of millionaires matters not. Theirs is a love story simple enough to be relatable yet glamorous enough to capture our imaginations, especially in this Internet era where celebrity scandals are a dime a dozen.

From the moment William slipped Diana’s engagement ring on Kate’s hand, she was seemingly anointed the new “People’s Princess.”

Princess Diana was widely admired in her life, and deeply mourned in her death. But she lived and died before social media, in a way that the Duchess of Cambridge hasn’t. Still, as digital sites such as Hollywood Life and Perez Hilton have begun to replace tabloid magazines, our hunger for royal news has only grown.

The Windsors are among the most effective clickbait on the Internet, and it has led to a massive demand for all things royal. Earlier this month, a debate erupted over Kate’s “messy” hair.

Then the Internet erupted over her wearing the same outfit twice.

VanityFair.com just ran an entire story on Kate calling William “babe” at the storied Chelsea Flower Show, calling it one of the “more normal things we’ve heard about Kate and William’s relationship.”

That that is newsworthy says more about us than it does them.

We long for this tidbit of information specifically because it does normalize the royal family, and in doing so makes them not only accessible but attainable. After all, there’s still a bachelor prince in Harry, who broke the Internet when photos of him partying (nude!) in Las Vegas leaked three years ago.