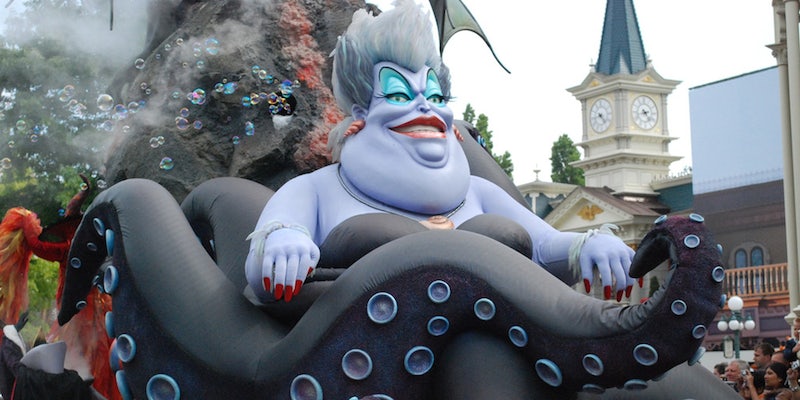 What Disney movies taught me about being gay

If Ursula's a lesbian, she's hardly the only Disney character in the family.

Ursula from The Little Mermaid is almost certainly a lesbian, according to stand-up comic James Adomian, who lovingly refers to the iconic Disney diva in a recent viral bit as a “big dyke with a butch haircut.” Adomian, who is openly gay, doesn’t believe that Ursula deserves the negative treatment she receives in the movie. “Every time I’ve ever met a woman like that in my life,” he says, “she’s been awesome.”

To an extent, Adomian is right: Ursula definitely has deep roots in queer culture. According to bonus materials on The Little Mermaid DVD, Ursula was modeled after the famous drag performer Divine, star of the original Hairspray.

And because the term “ursula” etymologically means “she-bear,” some lesbians—like Tanya Gulliver of Canadian gay rag Daily Xtra—have used the term to describe the female equivalent of the gay male bear. Gulliver describes so-called Ursulas as “butch, fat or stockily built” lesbians who “resist shaving” and who have “down-to-earth” personalities.

Whether or not Ursula is, well, an Ursula, Disney’s side characters and villains have always functioned as barometers of Otherness in American culture. As Cracked points out, the Disney canon is full of racial stereotypes and caricatures from the “Red Man” in Peter Pan to the street merchant at the start of Aladdin. Whenever they are released, Disney movies seem to reveal the particular prejudices of their time.

Disney’s approach to LGBT issues over the years has been no exception, as the Internet has been slowly digesting all hints of queerness in Disney films for years now. Tumblr, in particular, has injected new life into discussions of “queer coding,” the use of stereotypically negative queer traits to demonize characters, and several Disney villains are queer-coded—from the effete Scar in The Lion King to the magenta-clad Governor Ratcliffe in Pocahontas.

On the other hand, Disney films do contain some positively-portrayed characters who also carry connotations of queerness. The Genie in Aladdin has such an intimate relationship with Aladdin that many have speculated about the Genie’s sexuality, including one YouTuber who produced a beautiful mashup of Avenue Q’s “If You Were Gay” with scenes from the Disney film. It’s probably not a coincidence that another YouTuber did the exact same thing with Timon and Pumbaa from The Lion King.

Disney movies can be profoundly body negative, often playing fat characters for comedy or associating their fatness with their immorality. This fatphobia takes on an even more pernicious dimension in the case of Disney’s queer-coded villains. In the musical number “Poor Unfortunate Souls,” for example, the animators strongly suggest that Ursula’s dancing body should be seen as inherently comic. As she shakes her breasts toward the camera, her minions tremble in terror in an obvious attempt to pathologize Ursula’s body type along with her campy delivery. Along similar lines, Governor Ratcliffe’s manservant in Pocahontas is shown struggling to buckle Ratcliffe’s belt.

Together, these characters reinforce the idea that being fat and queer is especially wrong or, conversely, that the only way to be a “good” queer is to be a thin one. As Anna Marlow notes on Bitch, there are “deeply rooted intersections between fatphobia and homophobia,” ranging from the slur “fat dyke” to public health initiative’s inordinate focus on the size of queer bodies.

What’s more is that fatphobia is also a problem within queer communities. It’s relatively common for users of the gay dating app Grindr, for example, to write “no fats” on their profile. By disparaging their fat queer-coded characters, Disney movies underscore the body image issues that plague the LGBT community from within and without. But the fact that Disney seems to be playing Ursula’s body for comedy doesn’t mean that queer people haven’t reclaimed Ursula as a symbol for fat femme expression.

2) Don’t be effeminate or campy.

If Disney movies were Grindr profiles, not only would they say “no fats,” they’d probably also say “no fems.” Disney’s queer-coded male characters tend to be feminized in order to make them seem even more evil. In The Lion King, for example, Scar coos that he’s going to “practice his curtsy,” daintily raising his paw to his mouth immediately before threatening Mufasa.

“There’s one in every family—two in mine, actually—and they always manage to ruin special occasions,” Mufasa’s bird Zazu observes as Scar slinks away.

Scar’s not the only femme in the Disney family. In Hercules, Hades adopts effeminate mannerisms, and he can also be seen drinking a Cosmo. Governor Ratcliffe wears pink bows in his hair and sips wine. Aladdin’s Jafar, too, adopts effeminate mannerisms and speech patterns throughout the film. One enterprising YouTuber even changed the lyrics to Jafar’s most musical number to be a song about his love for Aladdin.

By sending the message that effeminacy is especially villainous for queer-coded villains, Disney films underscore the complicated relationship with femininity that splinters LGBT communities. Not only are gay men constantly stereotyped as effeminate by straight people, but the devaluation of femininity is also an urgent problem within feminist and queer communities, as evidenced by phenomenon like the oft-stated preference for “masc 4 masc only” in gay male online dating culture.

By deriding femininity in their queer-coded characters, Disney perpetuates the idea that queer people—especially queer men—should avoid feminine expression at all costs.

Disney is widely perceived as a gay-friendly company. Every year, Disney World in Orlando plays host to Gay Days, billed as “the world’s most popular gay and lesbian celebration.” This year, too, Disney notified the Boy Scouts of America that they will pull all funding from the organization in 2015 in a dispute over their ban on gay leadership.

But Disney’s body of creative work has yet to catch up with the company’s reputation in the public sphere. Although several Disney characters are queer-coded, Disney’s classic canon of live-action and animated movies include no out queer characters. When asked last year about the dearth of LGBT characters on the Disney Channel in particular, network president Gary Marsh told Salon that it’s “for the audience to interpret” who is and is not in the family.

By refusing to overtly identify any characters as queer, Disney is still sending an implicit message that queer people should keep their sexuality hidden and that they should quietly assimilate to the norms of dominant culture. After all, characters like Ursula and Scar who wear their queer traits on their sleeve are derided for those very qualities.

Queer-coded positive characters, on the other hand, are allowed to tinker with overt expressions of queerness, but they always shy away from any act of “coming out.” Timon and Pumbaa can pal around as a classic gay duo, but when they “accidentally” kiss, they both recoil in disgust as Renee Davidson observes on Salon. The Genie, too, can tell Aladdin that he’s “getting kinda fond of [him],” but he has to shy away from the romantic connotations of that confession with a quick homophobic joke: “Not that I wanna pick out curtains or anything.”

Whether it’s intentional or not, Disney movies still send the message that queerness is acceptable, so long as it’s not explicit. If Disney wants to start sending some different cultural messages about sexuality through their films, they need to shrug off negative stereotypes and start crafting some deliberate, authored queer characters. It’s time for a big dyke with a butch haircut to be the hero for once.

Photo via samllavi/Flickr (CC BY 2.0)