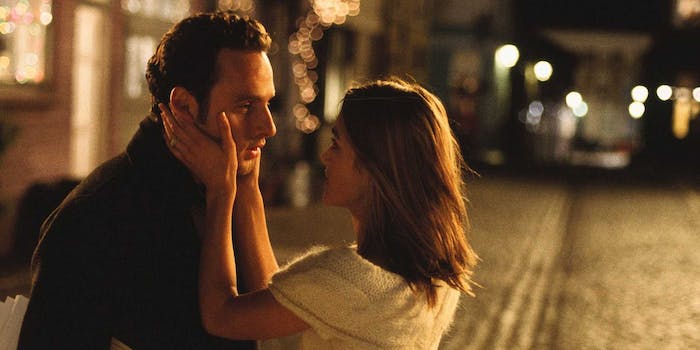 How did bashing Love Actually become the Internet's favorite pastime?

With the return of the Christmas season, you know what that means—time to dig out your copy of Love Actually! Except in the Internet age, to enjoy Love Actually means you also have to hate it. It’s become a part of the Yuletide tradition as crucial as enjoying a glass of eggnog or putting on your favorite Mariah Carey Christmas jam.

It’s hard to ignore the Internet’s recent obsession with dissecting the 2003 British holiday rom-com; the many reasons its critics find it to be such a terrible film were summed up in a recent “Honest Trailer,” calling Love Actually “creepy and depressing” and “a supercut of every rom-com cliché in the book.” In an article for the Atlantic, Christopher Orr further argues that Love Actually is actually “the least romantic movie of all time”:

I think it offers up at least three disturbing lessons about love. First, that love is overwhelmingly a product of physical attraction and requires virtually no verbal communication or intellectual/emotional affinity of any kind. Second, that the principal barrier to consummating a relationship is mustering the nerve to say ‘I love you’—preferably with some grand gesture—and that once you manage that, you’re basically on the fast track to nuptial bliss. And third, that any actual obstacle to romantic fulfillment, however surmountable, is not worth the effort it would require to overcome.

I’m not going to argue you into loving the movie; people like what they like and hate what they hate. But what makes the movie such a common Internet pinata? Love Actually suffers from a double dose of low-hanging fruit of corny film themes, being both a romantic comedy and a Christmas movie. Without a Hollywood budget and a slew of big name actors, the script could easily have been a December premiere on the Hallmark Channel.

But most importantly, the Internet has a major chick flick problem. Even in a movie climate where romantic comedy successes are few and far between, the Internet still takes the time to drudge up girly films from the past in the cause of destroying its unrealistic dialogue and tired clichés. It’s not only movies that fall victim to this; TV geared for women’s audience gets the same treatment. Sex and the City often gets the Love Actually Web treatment, with Carrie Bradshaw receiving the brunt of the retroactive criticism. A decade after the show went off the air, the Internet can’t stop reminding us why she “sucks”—at friendship, at fashion, at love, and at life.

But it’s not just men that are critiquing the frivolity of click flicks; women are right there are with them. Woman’s Day singles out a list of “chick flicks even women hate,” including low-hanging fruit like Bride Wars, 27 Dresses, and He’s Just Not That Into You. Time and the Daily Beast singled out The Ugly Truth, in which an uptight, clumsy girl falls in love with a macho guy. According to the Daily Beast’s Marisa Meltzer, these movies “cater to the lowest common denominator,” but how is that different than anything else now playing in theaters? Will Dumber and Dumber To ever get criticized for “ruining society?”

The difficulty with portraying women in films is the same problem women face in the real world. Women are complex creatures with complicated identities and varying goals: We can be educated and are driven for our own independent career successes, and on the other hand, we may crave romance and to start our own families. If your priority is more on climbing the corporate ladder, you can be seen as cold. If you are more concerned with building your own family, then you’re often seen as having regressive anti-feminist values.

But trying to have it all gets even trickier at the movies, where the formulaic treatment of romantic comedies doesn’t always fit the ever-changing roles of women in society, and even moreso, the new face of dating and romance. This is why women in films can so often appear out of touch with what we consider to be the ideal of a modern woman.

When it comes to entertainment directed at women, much like what women experience in the real world, the standards are much higher. The Internet’s favorite claim that romantic comedies make women “unrealistic about relationships” is a fallacy that movies are always beholden to a standard of realism. With that logic, we’d stop making violent thrillers because they can, and have, inspired actual crimes. This is clearly not true for big blockbusters, so why is it so important for a romantic comedy to not get women’s hopes up with unrealistic ideas about relationships?

The aforementioned “Honest Trailer” for Love Actually loves to point out its less romantic elements, like the Dead Wife and infidelity subplots, but why can’t that be a good thing? Love isn’t always clean and pretty. People stay from their marriage, and people fall in love with their best friends’ wives. In the same breath, the Internet chides Love Actually for being not romantic enough as well as being too idealistic, meaning that the movie has to live up to impossible expectations. How is it possible to satisfy everyone at once when they don’t seem to want to be satisfied?

Take for example the upcoming Fifty Shades of Grey movie, which will make a ton of money simply due to the an unstoppable hype machine behind it. (The trailers even got their own Beyoncé soundtracks.) Despite the fact that no one has actually seen it, reviewers are taking the time to pan the trailers over two months before the move is released, delicately going scene-by-scene picking it apart. After calling everyone who read the book “shame-faced losers,” New York Daily News’ Linda Stasi asks: “So who is the audience for this rom-dumb? Mostly women over 50, and housewives home with the kids. And that 20 percent of men who must be even less sexually satisfied than the bored housewives and women over 50.”

Debuting this Valentines’ Day, director Sam Taylor-Johnson’s adaptation of will inevitably rake in huge amounts of cash from its large fan base; that kind of success has traditionally spawned movie franchises with too many sequels and TV shows with too many seasons and might be greeted with excitement after a year of underperforming tentpoles. But when the target audience for that tentpole is women, the Internet is just as likely to have already decided that it will “suck.”

It’s time to take a deep breath and calm down about chick flicks. Just like in any genre, some of them are good, while others are are painfully bad. No one is saying that Katherine Heigl’s output over the last decade deserves anything less than the Internet’s winger wag of shame. But when the Internet assumes the duty of movie police by declaring chick flicks public enemy #1, by endlessly complaining about every movie or TV show that comes out, it just means we’re less likely to have stories made about women at all.

In her New York Times essay, “When Novels Were Bad For You,” Anna North points out that this has long been a problem of the female consumer: We refuse to trust them. North writes, “From the late 18th century through the middle of the 19th…women ‘were considered to be in danger of not being able to differentiate between fiction and life.’” But just as in Jane Austen’s day, female audiences are smarter than we give them credit for—they know what is and what isn’t real, how to separate reality from fantasy. When we’re watching Love Actually, we understand that we’re never going to fall in love with someone without speaking at least a little of the same language.

Love Actually reminds us that all we need is love, but sometimes we just need for everyone to shut up and let us like what we like.