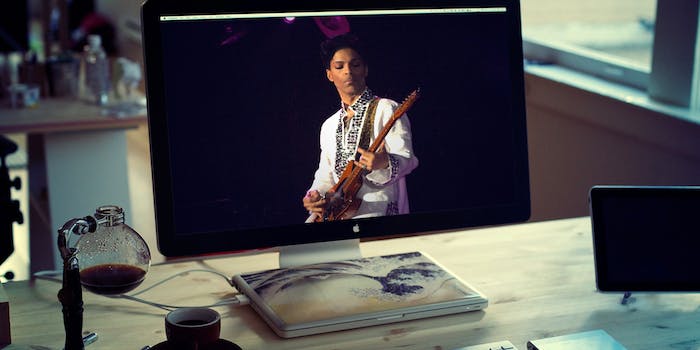 Prince’s complicated relationship with the Internet

The fight will continue on.

If you’re looking to take the sting away of Prince‘s untimely passing Thursday morning by streaming Purple Rain, you’re out of luck. The iconic singer, guitarist, actor, and all-around funk god had a complicated and well-documented relationship with the Internet—one that reduced most of his output to a single streaming service: Tidal.

But while his online legacy has largely been reduced to a single sound bite—“the Internet is over”—from a 2010 interview, Prince deserves more credit for his pioneering efforts and thoughts around digital distribution.

In 1994, Prince broke ground with Interactive, a CD-ROM that contained unreleased music, interviews, a video game, and a virtual tour. It was billed as an “E-ticket ride,” and in light of BitTorrent’s more recent experiments with bundled album downloads, it’s safe to say it was decades ahead of its time.

Prince deserves more credit for his pioneering efforts and thoughts around digital distribution.

In 1997, Prince offered a five-CD box set of outtakes and rarities, Crystal Ball, through an exclusive website or by phone (1-800-NEW-FUNK). And in 2001, just as Napster began sweeping college dorms across the nation, Prince unveiled NPG Music Club, a monthly subscription service by which fans could get exclusive Prince content. NPG won Prince a Webby Lifetime Achievement Award in 2006.

In the wake of albums like Musicology and 3121, Prince began a tour-heavy schedule and seemed open to distributing his music freely and at low cost, even giving away one album, Planet Earth, with every copy of a single issue of the Daily Mail. In a 2007 feature, the New York Times described Prince as prioritizing “getting his music to an audience, whether it’s purchased or not.”

“Other musicians may think that their best chance at a livelihood is locking away their music,” the Times continued, “impossible as that is in the digital era—and demanding that fans buy everything they want to hear. But Prince is confident that his listeners will support him, if not through CD sales then at shows or through other deals.”

As the preceding nine years since Planet Earth have shown, however, Prince’s real priority might have had less to do with distribution and more with his own freedom and control over his work.

Prince became famous for his avid litigiousness against pirates, bootleggers, and any digital service that would host his music without expressed permission, as well as an increased fear of technology in general (he supposedly never carried a cellphone). As he told the Daily Mirror in 2010, “I don’t see why I should give my new music to iTunes or anyone else. They won’t pay me an advance for it and then they get angry when they can’t get it. The Internet’s like MTV,” he continued. “At one time MTV was hip and suddenly it became outdated. Anyway, all these computers and digital gadgets are no good.”

The Electronic Frontier Foundation created the Raspberry Beret Lifetime Aggrievement Award in his honor in 2013, for his “extraordinary abuses of the takedown process in the name of silencing speech.”

Prince’s real priority might have had less to do with distribution and more with his own freedom and control over his work.

The following year, the artist formerly known as the Artist Formerly Known as Prince sued 22 fans for $22 million over recordings of his live shows. The court order described the sharing of the tracks as “unlawful activity” and blamed the fans. “Rather than publishing lawful content to their blogs,” the court documents read, “they typically publish posts that list all the songs performed at a certain Prince live show and then provide a link to a file sharing service where unauthorized copies of the performance can be downloaded.”

There’s no excusing that $22 million lawsuit (and Prince dropped it in January 2014), but you can understand his frustration with losing control of his own art and its distribution. After all, if artists don’t fight for their work, who will?

Prince was a loyal devotee to the traditional album-based model of the music industry that was in vogue during his peak years through the 1980s and 1990s. Just last year, while presenting the Album of the Year Award at the Grammys, he declared: “Like books and black lives, albums still matter.” He clarified later, in announcing his deal with Tidal, that what he truly wanted was autonomy. Describing record label contracts as “slavery,” Prince praised Jay Z for creating Tidal, telling a group of journalists, “We have to show support for artists who are trying to own things for themselves.”

Attempting to keep a hold of one’s music from streaming services or pirates is often a losing game. Even old standouts like the Beatles have begun to release their work on Spotify. That leaves performers with few options, and Prince took the route that at the very least allowed him the most control over his sound and image.

In many ways, his response to the streaming era has been roughly similar to that of Taylor Swift, who famously pulled her music from Spotify in 2014. (While much of his catalog can be purchased at the traditional price of an album on iTunes or Amazon, Prince largely eschewed streaming services like Pandora, Apple Music, and Spotify.) In an op-ed for the Wall Street Journal, Swift optimistically argued for the continuation of artist-based models of business for the music industry, stating “music should not be free.” Swift continued: “My prediction is that individual artists and their labels will someday decide what an album’s price point is. I hope they don’t underestimate themselves or undervalue their art.”

Prince—like Swift, Kanye West, Jay Z, Beyoncé, and other artists who have embraced Tidal—sought control out of his own interest, which he believed was the best way to preserve the sanctity of the art itself. It’s yet to be seen if fans agree. (Slate’s Jordan Weissmann argues Tidal is struggling against Spotify, Apple Music, and YouTube, not in spite of its focus on the artist but because of it.) But as long as titans of the industry can create and sustain something like Tidal, that fight will continue on and will likely end up redefining how you listen to and pay for music.