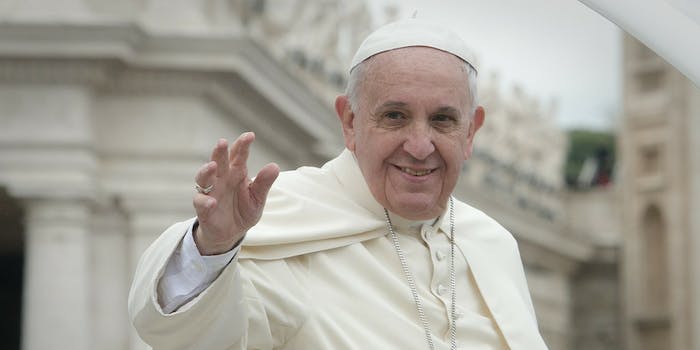 LGBT religious groups lobbied for a meeting with his holiness to no avail.

Pope Francis gave Kentucky county clerk Kim Davis an extra 15 minutes of fame in a secret meeting with his holiness during his visit in the U.S. last week. The meeting, confirmed by BuzzFeed through a Vatican spokesperson, was short with Francis allegedly encouraging Davis to “stay strong.”

The news of the meeting broke shortly after Francis left the United States. Right before his departure, Francis spoke on the papal plane about his beliefs on the religious liberty of government officials who refuse to issue marriage licenses to same-sex couples.

“Conscientious objection is a right that is a part of every human right,” Francis said. “It is a right. And if a person does not allow others to be a conscientious objector, he denies a right.” At that time, the pope said he was not speaking about a specific case but about the idea in general. But it’s possible Francis was aware of the Davis case having shortly met with her a few days prior.

Last month, Davis was jailed for contempt of court after the Rowan County, Kentucky, clerk refused to comply with federal laws and issue same-sex marriage licenses in her state—saying that doing so would violet her religious beliefs. 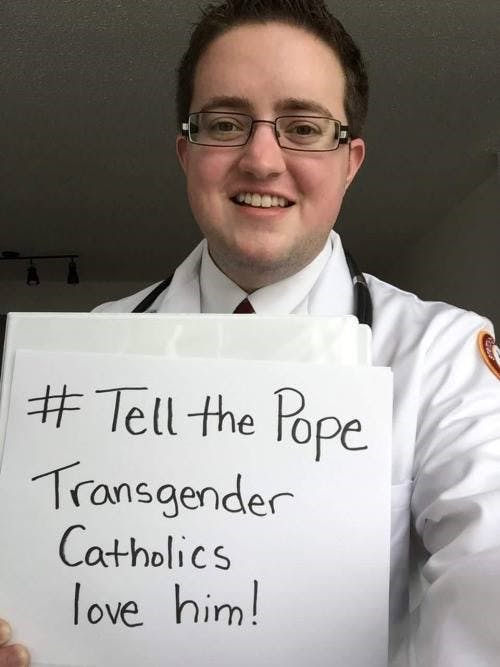 “It’s nothing short of appalling that the Vatican would turn its back on countless LGBT members and families by lending its support to someone who has brought so much pain to LGBT families,” said GLAAD CEO and President Sarah Kate Ellis after news broke of the meeting. “This sends a clear message that the Vatican simply doesn’t care about millions of devoted LGBT Catholics, who wish to be a part of the Church they love. Francis must answer the call of LGBT Catholics and finally hear their stories of faith, family, and affliction.”

Similarly, the Human Rights Campaign called for the pope to include LGBT people in his message placing a large banner outside their D.C. headquarters just blocks away from one of the Churches the pope held mass for hundreds of bishops.

“We are your children, your teachers, your faithful. Welcome by God, dismissed by our bishops. Pope Francis, will you welcome us home?” the banner said. He didn’t answer the call, nor did he welcome LGBT Catholics home.

In the past, Francis has extended olive branches to the LGBT community. In January, Francis met with a transgender man in a similarly secretive meeting. The meeting was clearly not an endorsement of the transgender community but a gesture of compassion. He also infamously said “Who I am to judge?” in response to judging gay priests.

Despite his slightly softer tone toward LGBT individuals, Francis is still staunchly anti-LGBT. In recent years, his holiness has likened trans individuals to nuclear weapons, saying both fail to “recognize the order of creation,” and has supported a traditional view of marriage that is exclusive to one man and one woman.

But Francis has held controversial meetings in the past. He is, after all, a spiritual leader and not a politician. Francis is led by his religious beliefs which are rooted in archaic, patriarchal, traditional Catholic doctrines—like restricting clerical positions to only men. Most of those beliefs Francis has emphasized are caring for the poor, weak, and hungry. His willingness to meet with those typically outcasted by society is overshadowed by his hesitance to meet with LGBT Catholics.

“I like to meet everyone,” Francis said during his trip to Cuba. “Because first and foremost I think every person is a child of God, with rights. Second, because meeting another person is enriching. Yes, I would like to meet with them.”

Apparently, the Francis is OK meeting people—just as long as they are not LGBT Catholics.

Update Oct. 2, 11am: CNN reports Pope Francis did, in fact, meet with an LGBT couple during his recent U.S. visit, hosting his former student Yayo Grassi and his partner at the Vatican Embassy.

Editor’s note: This story and its headline have been updated for clarity.