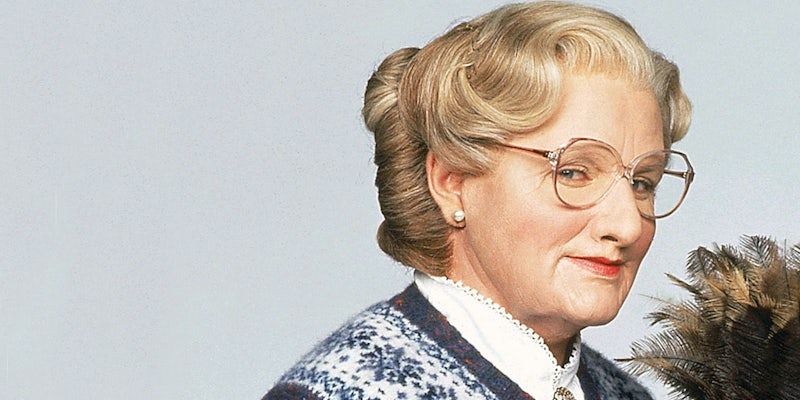 A ‘Mrs. Doubtfire’ sequel is a terrible, horrible, no good, very bad idea

Sometimes the past should stay that way.

Every time Michael Bay puts out another Transformers movie or an Adam Sandler vehicle finds its way into theatres, the public laments that Hollywood is out of new ideas. That’s not necessarily true. They say that for every 1000 screenplays, one of them will actually become a film. Thus, each hobbled incarnation of Pirates of the Caribbean represents 999 movies that didn’t get made—some likewise total crap, others with fresh perspectives and stories waiting to be told.

There’s no better indicator of Hollywood’s insistence on repeating itself than the recently announced sequel to Mrs. Doubtfire, the 1992 box-office smash that cemented Robin Williams as the era’s biggest comedy star. Along with Home Alone, the film is a cultural touchstone of the early ’90s, becoming a comedy classic in the years following its release. I have complicated feelings about the original film (as its third act turns into Kramer vs. Kramer), but I understand Mrs. Doubtfire’s appeal for those who grew up on Williams’ brand of manic comedy.

However, what plays well in 1992 reads very differently today. Mrs. Doubtfire was a product of the gender politics of its era, a cultural panic about divorce and men’s declining roles in the home, as well as a deep insecurity about masculinity. Although Pierce Brosnan’s character is the de facto villain, oily and polished like an Eastern European mafia prince, Sally Field’s “Mean Mom” is the real threat. Because she wears the pants in the family, Williams’ character has to prove his worth by wearing a dress.

The “man in a dress” trope has a long history in comedy—from Some Like It Hot to Tootsie and Bosom Buddies—but Tootsie showed a nuanced understanding of what it means to perform femininity. Its laughs come not from the image of Dustin Hoffman in heels but how he’s treated as Dorothy Michaels, but Mrs. Doubtfire never gets around to considering what its character’s life might actually be like. You’re constantly assured by the screenplay that Williams is a heterosexual male—and the gender bending poses little threat. Like every sitcom plot, order will inevitably be restored.

There’s no better indication of the film’s dicey gender and queer commentary than a scene in which Williams tricks his ex-wife into hiring Mrs. Doubtfire. When Field places an ad in the paper for a nanny to her children, Williams first phones as a number of different “wacky” characters, all deemed inappropriate candidates. During one phone call, Field informs the woman over the phone she’ll be babysitting two girls—and a boy. Williams responds in character, “Oh, a boy. I don’t work with the males, ’cause I used to be one.” His ex-wife immediately hangs up.

That joke likely played fine with audiences in 1992, less than a year after the wildly transphobic Silence of the Lambs won Best Picture, one of few films to ever win all top five awards on Oscar night. Mrs. Doubtfire also debuted the exact same month as The Crying Game, another AMPAS favorite that relied on the inherent titillation of transgender bodies. When my father saw The Crying Game the theatre, he reported that his fellow moviegoers “freaked the fuck out” or threw up. Many left.

But that was 1992, and the cultural climate has changed a lot in the past 20 years, as society has taken baby steps in its treatment of transgender people. Although violence and harassment is still the norm for many trans folks, they have become a part of the cultural conversation in a way they weren’t in the early ’90s. If Katie Couric had asked Laverne Cox objectifying questions about her private parts in 1992, the media would have barely batted an eye. In the Internet age, the blogosphere came for her head.

If Mrs. Doubtfire’s casual transphobia is a product of its era, so is its comedy. When the movie debuted, it earned over $200 million—a whopping $439 million when adjusting for inflation. For reference, that’s more than every movie this decade that didn’t have the Avengers or Batman in it. In 2000, Big Momma’s House could still be a whopping hit, but 2007’s Norbit cost Eddie Murphy an Oscar.

Gender-bending comedies don’t sell these days with either audiences or critics, as the controversy surrounding ABC’s Work It! proved. The show was a Bosom Buddies–style comedy about two men who masquerade as women to get jobs, and it was a critical and commercial disaster. After it debuted, Work It! scored what were then the worst reviews for a TV show in the history of Metacritic. Just two episodes were aired before the comedy was axed.

However, Work It! wasn’t just bad comedy. It was bad politics. Work It! received overwhelming opposition from LGBT groups like GLAAD, who claimed its gender representation would “hurt the transgender community” by trivializing the ongoing employment discrimination transgender workers face.

“These problems are even more pronounced in the show’s printed ad, which depicts the two main characters dressed as women while standing at men’s room urinals,” wrote GLAAD’s Mark Kane. “Not only does it inadvertently further notions that transgender identities are humorous or artificial, but imagery like this is one of the first things anti-LGBT activists resort to when trying to deny transgender people protections against discrimination.”

The Transgender Law Center’s Mark Snyder agreed, claiming that Work It! would “make it more difficult for transgender people to gain full equality—including the important right to access public accommodations appropriate to their gender identity.”

Just this month, we were reminded of how unfunny transgender workplace protections are, after Middle School teacher Laura Jane Klug was suspended from her job because of the simple fact of who she is. A culture that continues to laugh at “men in dresses” will continue to invalidate the struggles that actual transgender people go through every day, both in and out of the workplace. If our comedy is stuck in the ’90s, our treatment of LGBT people will be, too.

Hollywood might be intent on repeating itself, but Mrs. Doubtfire proves that sometimes the past should stay that way.