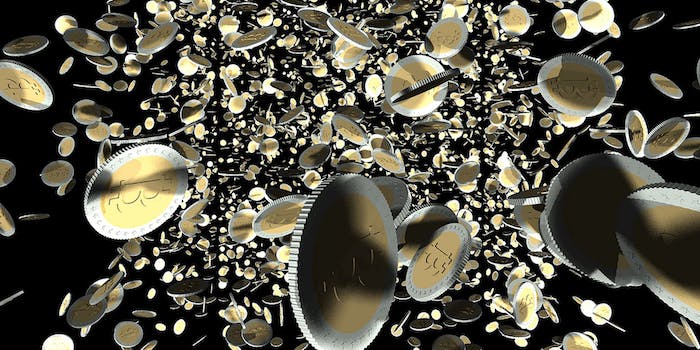 We need to redefine value on the Internet.

Bitcoin has big potential for changing how value transfer is being conducted on the Internet; it could reinvent it. Value transfer could be woven into almost any interaction on the Internet, and in doing so, Bitcoin could change our fundamental understanding of how we exchange value.

Technology has made it easier for people to create great content and distribute it. Everybody can make high quality music, videos, or articles out of her bedroom and share it to the world through the Internet.

The problem is that the ones who earn money from it are very few compared to the wide range of people who create the content we consume on a daily basis. The primary form of earning money through content right now is advertising, where value transfer is very indirect. Advertisers sell products to consumers, who then indirectly pay for the content. There is a lot of friction on how value is transferred from the creator to the actual consumer.

The time in which users expected everything to be free on the Internet is already over. People spend a great deal of money on digital goods, as long as the process is simple and convenient. Apple posted $4.6 billion in revenue from its iTunes service for Q4 2014. Even content creators, like the New York Times or the Wall Street Journal, can get people to pay for articles through paywalls.

The time in which users expected everything to be free on the Internet is already over.

Crowdfunding has shown us that monetary contributions can lead to new bold new innovations that otherwise would have never been realized. If the market can express more directly which content is in high demand, more of that content will be created. But we are still missing a simple and convenient way for the consumer to value the everyday content they consume—like music, articles, or videos.

Digital currency exists in social networks in the form of “Likes,” hearts, stars, favorites, and so on. That is the method by which the consumer shows that they value specific content. This is also only a very indirect form of value transfer. Through “Likes,” content gets shown to more people, but no monetary value is being transferred.

There is a second problem with “Likes,” this time on the user side. They are a very imprecise way of showing how one values something, because there are just two choices: liking something or not liking it. There is no differentiation—you can’t express how much you “Like” it, which makes communication in social networks less effective.

Microvalue transfer through Bitcoin could be a way to change that.

Wouldn’t it be nice if we had a Bitcoin tip option instead of a “Like” button? You could tip the content you like with a variable amount of Bitcoin and express how much you like it. On the other hand, you could also support the creator, making the possibility of them creating more of the same content higher. There could also be a platform where you can see who tipped how much to whom.

Projects like ChangeTip and CoinWidget are working on an idea like this, but we need a big social player to move in—in order to further its widespread adoption. “Likes” are just an intermediate step in the evolution of value expression on the Internet. Money is a better metric than abstractions to express and transfer value.

Imagine giving away a couple of cents for a funny meme, 10 cents for a video you enjoy, or a dollar for an article that changed your views. If you made a video with 200.000 views and 20.000 people gave you—on average—10 cents, you would get $2,000 dollars for the video.

“Likes” are just an intermediate step in the evolution of value expression on the Internet. Money is a better metric than abstractions to express and transfer value.

I consume a lot of music and articles on the Internet. I probably read about one or two good articles a day—and a couple mediocre ones. I would have no problem to pay 50 cents for a good essay if that means I will get to read more like it. I listen to a lot of music on Soundcloud, but if I download a song of an artist on Bandcamp, I often voluntarily pay more than the proposed amount to support the artist.

Balaji Srinivasan once said that “Bitcoin will do for value transfer what the Internet did for communication: make it programmable.” I think there are strong similarities between how the Internet changed how we communicate and what Bitcoin could do the future of value transfer.

The Internet not only democratized but also fragmented communication. Instead of only communicating with an insular group of people 100 years ago by means of letters, telephone, and person-to-person interaction, today we communicate with a greater number of people using more efficient means. Instead of writing one letter a day and waiting a week for it to be delivered, we now can have multiple interactions through email, chat messages, and micro communication through signals such as shares or likes in social networks.

I think value transfer will move in the same direction. Instead of buying one album on Amazon a month, I can imagine people giving away the same amount of money to hundreds of people. Platforms like Soundcloud could take a cut, solving part of their monetization problems.

Micropayments and small-scale transactions were very impractical before Bitcoin—simply because the fees for making a transaction (see: PayPal) are too high. I think that micropayments are a big part of Bitcoin’s revolutionary potential. Bitcoin adoption is steadily growing, but it still needs to prove its unique value proposition; it’s missing that killer app that makes it irresistible. A widely adopted Bitcoin tip button could lead the way in this direction.

As the Web 2.0 put a social layer over Web services and our interactions across the Internet, it’s time to add a value layer to our networks. This could be the opportunity for disruptive innovation. New companies could replace current companies, copying their existing services but with a value layer.

I think that micropayments are a big part of Bitcoin’s revolutionary potential. Bitcoin adoption is steadily growing, but it still needs to prove its unique value proposition; it’s missing that killer app that makes it irresistible.

Digital goods are not the same as physical ones. You can reproduce and distribute them without almost any cost. When Napster appeared and revolutionized music distribution, the music industry was too slow in adopting and building a working payment system. Today, streaming is the method of choice for consuming music. But the system is still broken. Smaller artists use Spotify only as a marketing tool; they don’t get paid enough to make a living off it.

We still haven’t solved the problem for the average person to earn money from producing digital goods. I think part of the problem is that we treat payment for digital products too similarly to the payment of physical ones. We need to imagine totally new ways, using all the possibilities that new technologies like Bitcoin enable to build new forms of value transactions. Maybe we will move from direct payments, where you pay something and get a good or a service, to a more donation-based model.

The suggested combination of the functions of a payment and a “Like” would be a step in this direction. Just like in the real world, a purchase could be visible and be a possibility to express value.

Music distribution might be a good starting point for such implementation. Music—and the purchase of related items like band T-shirts—were always a way to express oneself. A digital record of your tips to artists could be a similar way. With a value layer over the networks, we could build giant decentralized marketplaces for content, and content creation will be a lot more valuable, meaning that more relevant content will be produced.

Moritz Stellmacher is an inventor interested in virtual reality and Bitcoin. He is the founder of Abend.net.