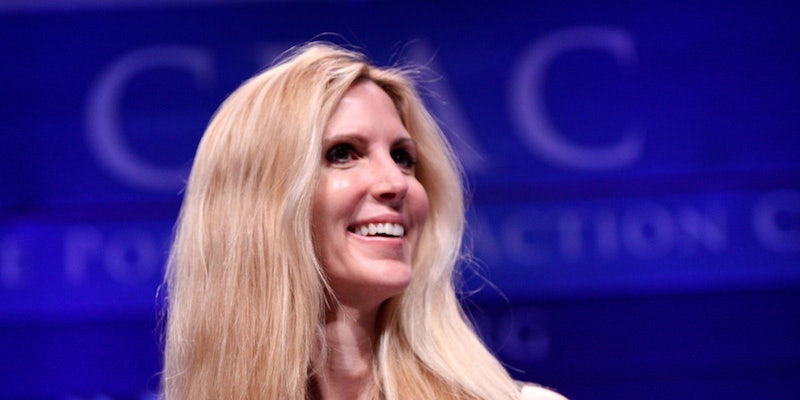 Why Ann Coulter is dead wrong about immigration in America

Will she ever stop?

Coulter, who is promoting her new book ¡Adios, America!: The Left’s Plan to Turn Our Country Into a Third World Hellhole, made a shocking number of outright racist remarks during the discussion, strongly suggesting that Mexican immigrants flee to the U.S. from a “deficient culture,” incorrectly claiming that 30 million undocumented immigrants live in the country.

Perhaps if the interview had been taped on Wednesday, Coulter would have sung a different tune, after federal courts denied President Obama’s initiative to significantly change the U.S. immigration system. A group of 25 states led by Texas filed a lawsuit to block Obama’s executive order, arguing that he lacked the authority to make such a change.

While the initiative wasn’t perfect, it would have extended eligibility for Deferred Action for Childhood Arrivals (DACA) and created a new Deferred Action for Parents of Americans and Lawful Permanent Residents (DAPA). As of the ruling, millions of undocumented immigrants are left with uncertain futures.

The fundamental tenet of the #WhiteGenocide movement on Twitter is the idea that anti-racist actually equals anti-white and that diversity and multiculturalism are the equivalent of ethnic cleansing of white Americans. Coulter’s become quite the champion for the movement with the release of her new book.

Consistent with that white supremacist faction, Coulter’s operative theory makes claims about a massive media and governmental conspiracy to cover up “basic information about the people they are bringing into this country in order to change it into a direction that is more favorably disposed to vote for the Democrats,” as she told Fox’s Sean Hannity on Wednesday night.

In addition to her partisan theory, she also added that immigration would devolve America into a charred hellscape of crime inherent of “Other” cultures.

One of the most common misconceptions of immigrants in the United States is the idea that they bring crime into the country. As the Daily Dot’s S.E. Smith points out, immigrants are less likely to commit crimes after entering the country, and immigrant communities, in fact, have lower crime rates.

However, immigrants continue to be targeted by the racial profiling inherent in the American justice system. Despite this, there are fewer incarcerated immigrants than American-born inmates, according to the Southern Poverty Law Center. (That’s not to suggest the criminal justice system in the United States is absolutely just.)

Coulter’s assertion that immigrants are bringing with them a culture of sexual assault is wrong and offensive. As recent headlines have shown, rape culture is very American and not alien to white people. Josh Duggar, of TLC’s 19 Kids and Counting, admitted to the alleged molestation of five young victims.

In an article for Salon, Jenny Kutner reports that the Duggars’ homeschooling practice, known as the Quiverfull movement, “follows your typical radical evangelical principles—every word of the Bible is taken literally, traditional gender roles and ‘family values’ are emphasized, and the secular world is alternately scorned and feared.”

But the most insidious tenet of Quiver is that birth control is “evil,” and they “want to have as many children as possible, in order to build a pint-sized fundamentalist Christian army.” According to Kutner, this school of thought also places accountability for sexual assault on the victims. While this is a rather extreme example that is not necessarily indicative of the entire Christian community, it still shows the obvious flaws in insisting rape culture is exclusive to Latino immigrants.

To add to her list of blatant inaccuracies, Coulter lacks basic knowledge of history of American immigration policy. “Before Teddy Kennedy’s 1965 immigration act,” she explains to Ramos, “there was more diversity in immigration.”

Prior to the Immigration and Nationality Act of 1965, however, national immigration quotas were determined by the National Origins Formula, beginning with the Emergency Quota Act of 1921. These formulas largely applied to white immigrants, allowing two to three percent of a European country’s population into the United States, favoring men over 21 with agricultural experience.

Although Mexicans weren’t included in the quota acts because they were often used as labor reserves, the policies heavily restricted immigration from Asian and Middle Eastern countries, as well as from the Caribbean.

Coulter’s belief that immigrant cultures are “deficient” is also consistent with the biological racism present in the exclusionary immigration policies prior to 1965. In their book Culling the Masses, David Fitzgerald and David Cook-Martin explain that the “dominant view in the 1920s was that certain racial groups had higher intelligence, a lower disposition to criminal activity, and a higher capacity for democratic self-governance.”

This was the basic principle of the quotas in place for over 40 years in U.S. immigration policy, hardly the diverse portrait Ann Coulter attempted to paint in her interview.

But according to the rally cry of #WhiteGenociders, diversity is antithetical to white survival. One major hole in the #WhiteGenocide logic, though, exists in the name of the movement itself. See, the suffix of genocide, “-cide,” denotes the act of killing. The killing is what’s missing from their primary argument—that every “white country” is forced to be multicultural, which results in the “end” of “white culture.” This, of course, ignores centuries of white colonialism which literally resulted in the genocide of indigenous peoples across multiple continents.

According to Coulter and the #WhiteGenocide narrative, the “browning of America” is erasing “Anglo America,” and Mexicans are just as deadly as ISIS. Not only is this completely false, it can be deadly for countless immigrants in America, who are too often made the victim of hate crimes due to fear and misinformation.

As America closes its door to millions of immigrants after the blockage of Obama’s immigration order, such thinking is part of the reason why.

Feliks Garcia is a writer, powerlifter, and foster parent of homeless cats. He holds an MA in Media Studies from the University of Texas at Austin, is Offsite Editor for the Offing,  and previously edited CAP Magazine.