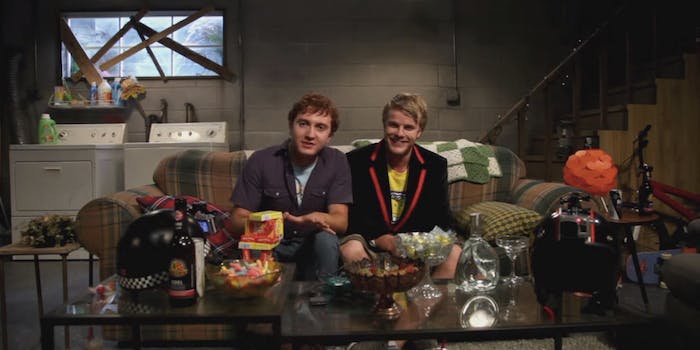 How the creators of ‘Zombie Basement’ are striking YouTube gold

The zombies are finally out to play, as new webseries Zombie Basement releases its first episode this week. For the show’s creators, it’s already been a long journey from idea to sharing their vision with the world.

The series follows a pair of pals, Joel and Guffy, who are broadcasting their own Wayne’s World-style YouTube show from their basement in the face of the apocalypse, collecting a cast of survivalist characters and worrying about typical teenage things in the face of zombies out for delicious brains knocking right on the basement window.

The show’s producers released a teaser for the series the week of Halloween 2014, but didn’t have a plan in place at that time for actually bringing the show to the world. The teaser was the first step in them finding potential partners to help produce their idea. They’d already assembled a top-notch team of cast and crew thanks to the Hollywood background of screenwriter David Schneiderman and director Brian Dannelly. Their missing piece was a producing partner who knew the space and knew how to make their webseries happen.

“We made this show and we’re proud of it, I think the thing we’re having trouble with is finding that new party to come on board and help us further it,” said Schneiderman. “Somebody who knows that space, someone who is invested in the YouTube space and wants to help us push it there.”

Part of the glory of the webseries is with a camera and a computer, anyone can try their hand at the medium. However, as the genre grows, the line between webseries and television series begins to blur. Productions like Video Game High School or The Guild have elevated the genre. For the Zombie Basement group, their vision needs support. After months of meetings, they’ve decided to put YouTube to work for them, building notoriety off episode one while they decide their next steps.

“The hope is showing people what it is might help it get in front of the right person,” Schneiderman said. “Or if we bump into somebody who asks what we’re doing, we can tell them to go check out the pilot. It makes it way easier than having this hidden product. We have to use YouTube for what it is, which is put your work in front of other people and let the audience decide if it’s worthwhile to move forward.”

Schneiderman says the team already has the second episode ready and waiting, and its online fate will depend on how well the first episode does. Either they will find a partner and hold back on releasing any more until they’ve got a production schedule planned, or they might be able to move forward independently. Schneiderman says they hope to bring future Zombie Basement productions more in line with the current YouTube atmosphere.

“Our hope in the future is to take the guys and the world, and start bending it toward what’s happening on YouTube right now,” he said. “We would build our show around the structured episodes, but also our guys in their world commenting on what’s happening around them on YouTube. Then we can be constantly generating the type of content that YouTube thrives on.”

That means Guffy might do a top 10 list spelling out ways zombie movies are not at all like the actual zombie apocalypse, or they might conduct challenge videos while they’re bored in their basement. The ultimate goal of all this extra content is to build a community for potential fans.

“We want to reward the fans,” Schneiderman said. “We want to get them in the door, then make them want to get everyone else in the door. We need to hope this leads us to a place where we can constantly build content for the show.”

Of course, this all hinges on the right eyes getting on their pilot episode, hence the public release. If fans flock, Schneiderman and team hope that along with those fans come interested parties who can make their show a reality.

“I think that we’re at a place where I think we need to show what it is, and see if that helps us figure out where we can take it,” he explained. “Or find the right audience or somebody in the audience who can help us continue the journey.”