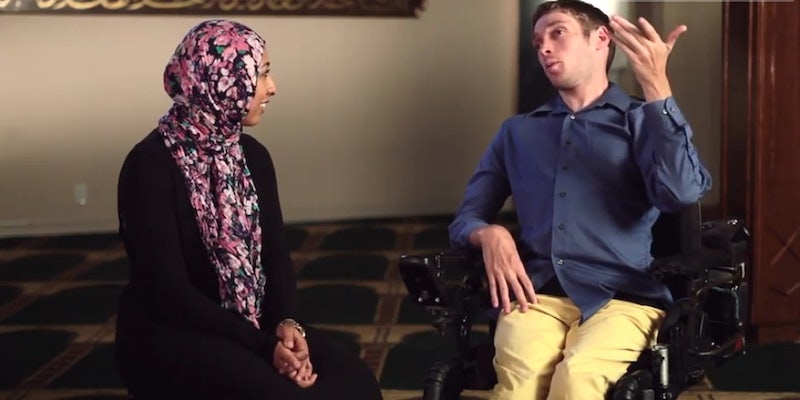 In the premiere episode of Have a Little Faith, Zach Anner takes on Islam.

Zach Anner first took the world by storm with an Oprah audition in which he used his comedic skills to make people see cerebral palsy in a different light. Now, after two boundary-pushing comedic series, Rollin’ With Zach and Riding Shotgun, the 28-year-old is taking a look at the boundaries people set up for themselves when it comes to religion.

Yesterday, Anner uploaded the first installment of a new webseries, Have a Little Faith. In the series, produced as part of the Soul Pancake YouTube network, he vows to use his own “outsider status” to help people find ways into religions that might seem strange or scary to them.

Anner, a self-proclaimed “religious idiot,” starts off by tackling one of the scariest religions of all: Islam.

The results are a heartwarming and enlightening nine minutes that Anner told Facebook he is “so proud of,” in which he attends a mosque and speaks to Muslims about prayer, the wearing of the hijab, and other aspects of Islam.

Anner may not find his way to a religion of his own, but even if the results don’t make his YouTube audience believe in God, it might just make them have a little more faith in the rest of us.