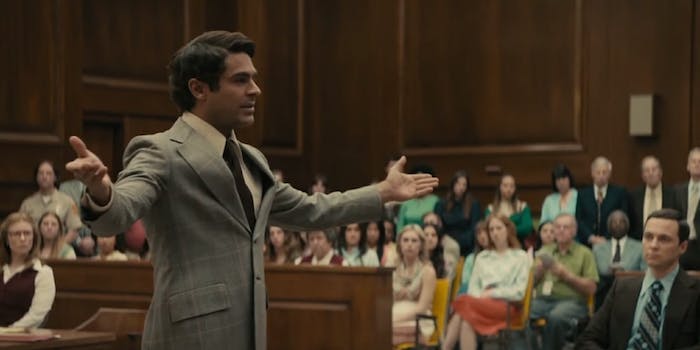 Some think it's offensive toward his victims.

Every now and then, the internet becomes thoroughly obsessed with serial killers. This time, it’s Ted Bundy, the subject of both Netflix’s Conversations with a Killer: The Ted Bundy Tapes and the upcoming film Extremely Wicked, Shockingly Evil, and Vile starring Zac Efron.

But some internet users are torn over the latter’s depiction of Bundy. They claim the upcoming thriller makes light of his violent killing spree that ended the life of at least 30 women.

Controversy first began after a trailer for Extremely Wicked, Shockingly Evil, and Vile went live on Friday. The clip introduces viewers to Elizabeth Kloepfer, Bundy’s girlfriend, and her relationship with the serial killer before and during his trial. However, the trailer humanizes Bundy in order to capture the confusion and uncertainty Kloepfer felt. At times, it almost feels like a romantic comedy, one where the extremely quirky, shockingly charming, and friendly hero begs his girlfriend to trust him while being framed for being a serial killer.

“Imagine you had a daughter that was raped before being murdered and then decades later an edgy thriller about the man who did it is made, where he’s portrayed as some cool, impressive guy rather than the disgusting animal he was, honestly sickening,” @_kitto_ tweeted. Her post has since earned over 41,000 retweets and 140,000 likes.

imagine you had a daughter that was raped before being murdered and then then decades later an edgy thriller about the man who did it is made, where he’s portrayed as some cool, impressive guy rather than the disgusting animal he was, honestly sickening https://t.co/zi6KH2KkRb

Many users were quick to agree with her response, criticizing the film for its depiction of Bundy.

Awarwness or not, they could have shifted the perspective or edited it differently than portrayed here. Him being charming as a selling point is pretty gross.

dude, the mere fact that they cast zac efron when he looks nothing like bundy just SHOWS the intent was to romanticize the sucker. showing he was a “normal” dude who was well-liked in his community and portraying him as a “sexy devil” are two different things

But not everyone felt the same way about the film’s trailer. After all, the movie is trying to capture the confusion and self-doubt Kloepfer experienced while dating Bundy. While the trailer’s edits and mood downplay Bundy’s actual violent behavior, that’s part of the point: He was charming and preyed upon those around him.

It’s through Liz, his girlfriend’s perspective who believed that Ted was innocent. And so many people thought the same and the trailer is trying to show that.

I doubt Ted Bundy would actually be humanized as a cool, impressive guy in the movie itself tho since the movie's director is regarded as an outstanding maker & producer of true crime documentaries… hopefully. https://t.co/q5KsDt3DVb

to me, this trailer highlights the most terrifying thing about ted bundy: he was a true monster among us. A handsome, “charming” man with something so evil inside him, it should have radiated from him. but it didn’t. he was a wolf in sheep’s clothing that viciously hunted women. https://t.co/Q7y8Kk7fbd

In the end, Twitter users will have to wait for the film’s debut in theaters to decide whether its approach to Bundy is in poor taste. But for the record, initial reviews on the film are far from promising. Case in point, Kevin Fallon from the Daily Beast criticized Extremely Wicked, Shockingly Evil, and Vile for its uncomfortable handle on Efron’s “Hot Ted Bundy.”

“There’s little in the way of dissection or even depiction of the murders, which has the absurd effect of elevating Efron’s winsome Bundy into a protagonist you root for getting away with it all,” Fallon writes. “And as for any insight into Bundy’s psychology—why he did it, how he thought he could get away with it, why he maintained his innocence for so long—there’s none of that.”

In other words, it seems critics have the right mindset: “Hot Ted Bundy” is rife with problems. Maybe it’s time for Hollywood to stop obsessing over violent, abusive, and predatory men.