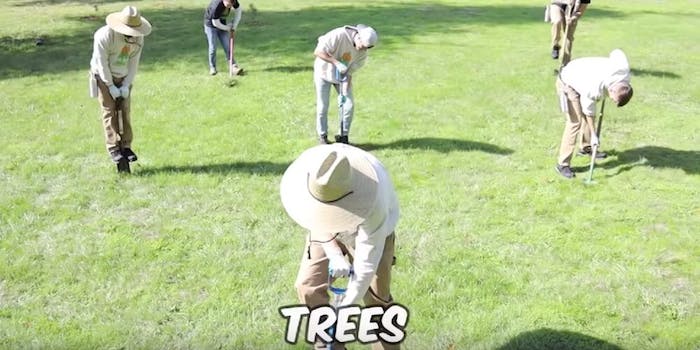 MrBeast collabs with other YouTube stars to plant 20 million trees

Marshmello, The Slow Mo Guys, and Ninja have all pledged to help the project.

A group of YouTubers is raising money to go toward its goal of planting 20 million trees by the end of 2020.

MrBeast, a popular YouTuber who is known for doing stunts and donating large sums of money, said his fans flooded his social media channels, asking him to plant 20 million trees in celebration of hitting 20 million subscribers. He banded together with other famous YouTubers and the Arbor Day Foundation, a conservation and education organization, to tackle the project.

The Arbor Day Foundation will plant one tree for every $1 donated. In less than 24 hours since the project launched, YouTube fans have donated almost $3 million–or three million trees.

“We only have one earth, and it’s important we take care of it,” MrBeast said in a video about planting the trees. “People just keep making fun of our generation for retweet activism and not actually doing something … This is your chance to make a difference.”

This is amazing, we’re at 2.8 MILLION trees in less than 24 hours!! Have you joined #teamtrees yet?? Don’t put it off, don’t hope someone else will do it instead. DO IT!! Every single dollar is a tree planted in the ground! Http://teamtrees.org

A post shared by No Instructions Podcast (@noinstructionspodcast) on Oct 26, 2019 at 7:38am PDT

High-profile YouTubers, like Marshmello, The Slow Mo Guys, and Ninja, have already pledged to help the project. MrBeast invited all YouTubers to participate. YouTube confirmed with the Verge that it would cover transaction fees for donations made on its platform.

The YouTubers hope not only to raise money for the project but also to raise awareness about conservation online. The group said it hopes that the members can beat the YouTube algorithm with an outpouring of videos about trees. They are hoping it will move environmentally friendly and conservation videos to the top of the “recommended” playlists and “trending” charts.

One of the YouTubers involved in the project, Mark Rober, who used to work for NASA, said planting 20 million trees won’t make a huge difference in terms of global warming. Instead, he thinks the most powerful part of the project is getting the word out and using the opportunity to educate people.

“It’s a constructive way to send a message to the politicians that it’s freaking time to do something about climate change,” he told Mashable. “Plus, we just really love trees, so this is like a fist bump to Mother Earth.”

The Arbor Foundation will begin planting in January 2020.