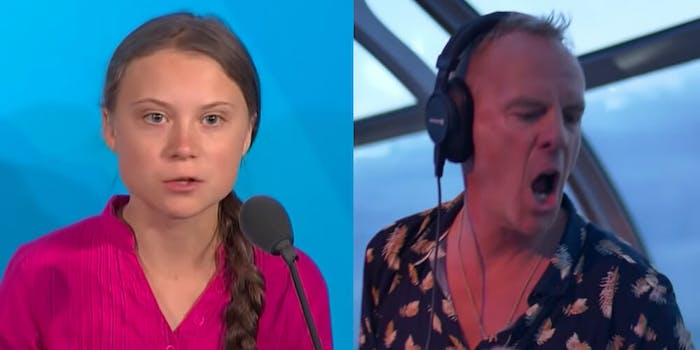 The collaboration that defines 2019 is here and it features teen climate activist Greta Thunberg.

The remix begins with an excerpt from Thunberg’s speech.

“People are dying. Entire ecosystems are collapsing. We are in the beginning of a mass extinction. And all you can talk about is money. You are failing us, and the young people are starting to understand your betrayal. The eyes of all future generations are upon you. We will not let you get away with this. Right here, right now is where we draw the line. The world is waking up. And change is coming, whether you like it or not,” Thunberg can be heard saying.

The mix continues with “right here, right now” in Thunberg’s voice. The video itself contains a collage of climate protests across the world as well as images of Thunberg and President Donald Trump.

Fatboy Slim (real name Norman Cook) first posted mashup on Facebook before playing it live at a show in England.

The 16-year-old Swedish activist is one of the young leaders at the forefront of the fight against climate change. Fatboy Slim is not the first public figure to stand with Thunberg in climate resistance. Several celebrities like Billie Eilish and Kim Kardashian West use their platforms to support Thunberg’s call for climate resistance.

“A note from Billie: ‘TICK TOCK! our time is running out. the climate crisis is very real. we need to speak up and demand that our leaders take action. #climatestrike #fridaysforfuture @greenpeace @gretathunberg,'” Eilish tweeted.

A note from Billie: “TICK TOCK! our time is running out. the climate crisis is very real. we need to speak up and demand that our leaders take action. #climatestrike #fridaysforfuture @greenpeace @gretathunberg” pic.twitter.com/2rbc6Pdr2p

Now, “Right Here, Right Now” the Thunberg edition will be stuck in our heads for the unforeseeable future.