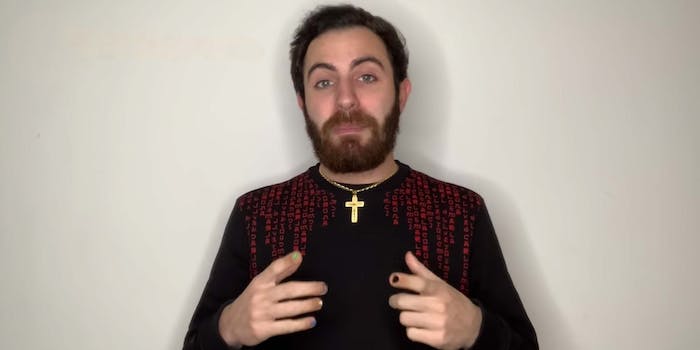 The 24-year-old falsely claimed to have snuck into a quarantined area of Italy.

A YouTuber is facing up to three months in prison after pretending to enter an area of Italy currently quarantined due to the coronavirus (COVID-19).

The individual, 24-year-old Francesco Belardi, alleged to have bypassed checkpoints near Milan in footage posted to his Instagram account.

Belardi claimed to have obtained “exclusive footage” after sneaking inside what is referred to in Italy as the “red zone,” a group of towns that have been placed under quarantine due to the viral outbreak.

Reports indicate that Belardi was aware that such actions were against the law. The YouTuber even stated during the video that he was risking a prison sentence and a fine if he were caught.

Belardi went on to claim that anyone could “enter the red zone in complete tranquillity” so long as they agreed to stay inside for 14 days. Both claims are false, and local authorities have put stringent rules in place in an attempt to keep the virus from spreading.

Italian outlet La Repubblica later exposed the incident as a farce. Belardi had actually been in the nearby town of Guardamiglio, which has not been placed under quarantine.

The YouTuber, who could face charges of “Publication or diffusion of false, exaggerated or tendentious news, likely to upset public order,” responded to backlash against the stunt by making his Instagram private.

Belardi responded to critics in a video on his YouTube channel earlier this week, where he alleged to have had his phone confiscated by police.

The incident is just one of many involving so-called online influencers and the coronavirus. Similar false claims have been made on apps like TikTok, where one user even posed as a lab technician while making inaccurate statements about the disease.