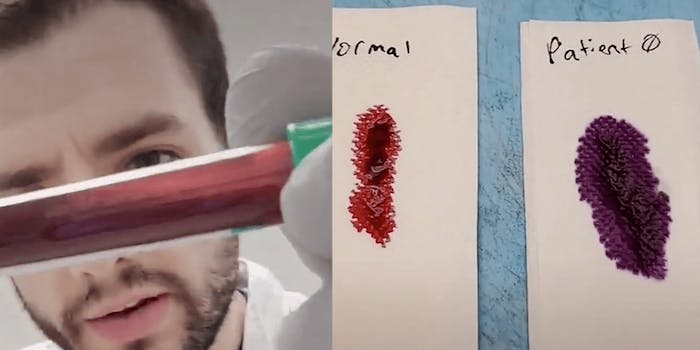 TikTok user pretending to be lab technician who has contracted coronavirus

One TikTok user says she had a panic attack after viewing a video of his.

A TikTok user appears to be impersonating a medical professional investigating the coronavirus outbreak in China.

The user, @wright.mitchr, allegedly even claims to have contracted the virus in one video, in which a red blood-like substance can be seen around his nose.

There's a guy on TikTok pretending he works in a lab and has contracted Wuhan coronavirus…I thought this went without saying but…don't do this.

Another video shows the user, who currently has more than 57,000 followers, analyzing what he claims to be two blood samples, one from a patient with coronavirus and one without. The user goes on to highlight how the allegedly infected blood appears much different than that from a healthy individual.

All of the videos have since been removed from the user’s profile. Only duets of one of the videos can still be found on the app.

“This is from patient zero, the one that we treated yesterday,” the user says. “I haven’t opened it yet. I’m going to get it out on some paper here and show you guys, but that doesn’t look right to me. Something’s not good about that blood.”

The videos quickly spread across TikTok, leading numerous users to repost them as if they were true. Others, though, were quick to criticize the account for stirring up fears.

One TikTok user says she had a panic attack after viewing a video of his.

“It’s putting people like me, with anxiety–really bad anxiety–into a panic mode,” she says, before addressing him directly. “If he sees this, can you just stop? … You’re scaring the fuck out of people.”

It remains unclear whether the user removed the videos himself in response to backlash or whether TikTok pulled them down. The Daily Dot reached out to TikTok to inquire about the videos but did not receive a reply by press time.

TikTok did announce earlier this month, however, new guidelines aimed at cracking down on misinformation.

The aforementioned videos are just a small part of a much larger issue involving false information and the coronavirus. TikTok already faced criticism this week after numerous videos pushing conspiracy theories about the virus were discovered as well.