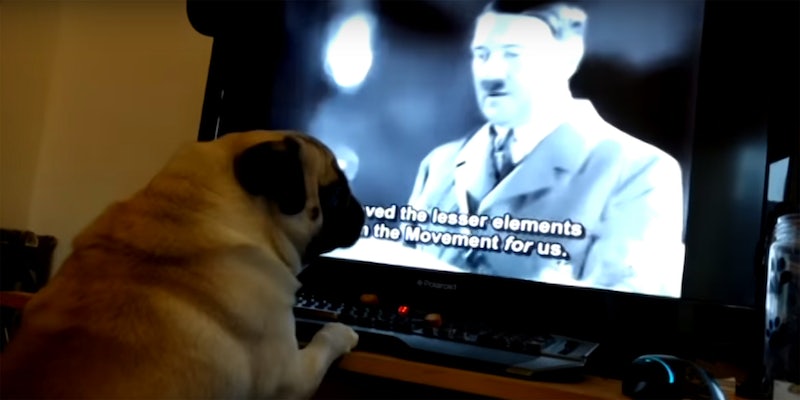 He has requested asylum in the U.S.

“I’m not going to pay the fine, because we’re going to appeal,” Meechan said in front of a reported crowd of 100 supporters outside the courthouse. “This sets a very dangerous precedent because the court is deciding what people can say.”

His attorney, Ross Brown, said that the fact Meechan has been branded a criminal is enough of a punishment.

“Mark Meechan does not want to go to jail but is prepared to do so, so he remains true to his belief that freedom of expression is at the very core of our democracy,” Brown said.

Scottish YouTuber Mark Meechan, known as Count Dankula, was convicted on Tuesday for posting a “grossly offensive” video of his girlfriend’s pug doing a Nazi salute.

“I think it’s a very, very dark day in regards to freedom of speech and freedom of expression,” said Meechan, 29, according to Yahoo News U.K. He also warned British comedians against making jokes “because your context and intent behind them apparently don’t matter anymore.”

Meechan posted the video titled “M8 yer dugs a Nazi” in April 2016 and was arrested last year. He now faces jail time under the Communications Act 2003, according to Yahoo News.

Yup that's me. You're probably wondering how I ended up in this situation.. pic.twitter.com/fdyxTLi5hN

Prosecutors reportedly said Meechan’s video was “anti-semitic and racist in nature.” Sheriff Derek O’Carroll said in court that “the accused knew that the material was offensive and knew why it was offensive,” according to Newsweek.

While awaiting trial, Meechan tweeted that the court ordered him to meet with a social worker for an assessment as to whether or not he would be placed under arrest with a GPS tracking device.

Meechan’s girlfriend, Suzanne Kelly, said at Airdrie Sheriff Court that she was originally annoyed to see her dog painted as a “monster” by saluting on command to phrases such as “gas the Jews” and “Sieg Heil,” according to Herald Scotland.

Kelly said she knows “gas the Jews” was “not a very nice thing to say” but that the phrases were only to get a reaction from the dog. She defended Meechan, saying he has “never expressed anti-Jewish or anti-Semitic” views and has “always been very supportive towards minority groups.”

Meechan has maintained that his video, which garnered over 3 million views, is not a reflection of his character.

“I am not a racist at all, anybody who knows me could tell you that,” Meechan said following the initial backlash. “I’m freaked out because everyone’s going to actually think that I hate Jews now and I don’t at all. I’m kind of panicked about it.”

Twitter is now debating whether Meechan’s sentencing was an Orwellian horror or a justified verdict.

Count Dankula just got convicted of being "Grossly Offensive" in Scotland. He could face six months in prison over a video of a dog raising it's paw. So, Scotland is officially a joke of a country.

A petition has circulated with the title “Free Count Dankula,” but just in case Meechan faces jail time during another sentencing on April 23, the YouTuber has requested asylum from President Donald Trump.

Ayy fam, gonna need to crash at your house for a while. @POTUS