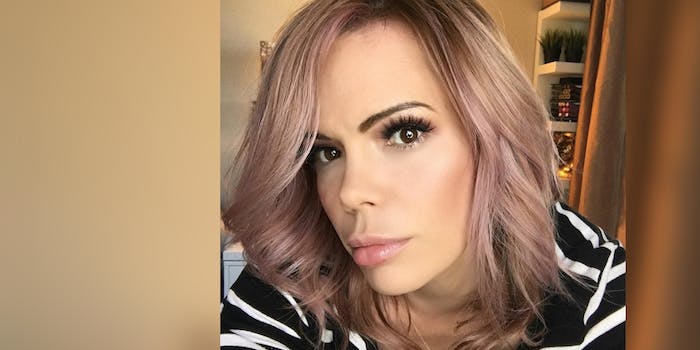 'No one cares that you are a Scorpio Jeffree, you're being a dick.'

YouTube star Stephanie Nicole caused a stir on Sunday when she posted a review of Jeffree Star cosmetics, which included a lengthy criticism of Star himself and the alleged harassment of his fans.

The video is more than 40 minutes long and includes an almost 20-minute criticism of the makeup itself, including ingredients, practices, packaging, color palate, and customer service. She comments, “I will never buy anything from Jeffree Star. I will never recommend them.”

After the review of the makeup, Nicole launches into a criticism of the personality behind the brand, Jeffree Star. Nicole makes a thorough inventory of Star’s history of online harassment of his fans and petty feuds with other beauty vloggers, noting his often racist and sexist language.

Nicole provides video clips and screen grabs of Star calling other vloggers and fans “cunts,” and she plays a video of him in a skit saying he threw battery acid into the face of a fictional black girl to lighten her skin. She comments, “Things I could have respected Jeffree for as a person and an artist is breaking down some stereotypes and being comfortable with who he is. I think that is very admirable if he’s given any other person courage to come out and be themselves. I mean that’s awesome. But that doesn’t negate being an asshole for over ten years.”

In the video, Nicole also anticipates backlash for her criticisms, noting that people call Star “sassy” and defend his actions because he has an outspoken personality. To that, Nicole quips, “No one cares that you are a Scorpio, Jeffree. You’re being a dick.”

Nicole is known for her thorough and honest tutorials and has more than 87,000 subscribers to her channel. She spoke to the Daily Dot about the video in an email, noting that the response has been more positive than she expected. “Response has been overall, ‘good,’ if that’s what you can consider it, given the nature of what was discussed,” she said. “I honestly expected to have more thumbs down then up. I should’ve had more faith in people wanting to know the truth despite their admiration of who they thought he was.”

When asked why so many vloggers support Star, Nicole explained:

“I think so few people discuss it, because Jeffree is nice to large channels. He has something to gain in befriending them. They are mostly, I want to believe, unaware. “How could this nice, brave man be mean when he’s so kind to me?” Instead of looking into it, some write the reports off as coming from a “hater”….the most overused word on social media, besides “yaaaaasssssssss,” of course. ;) lol. Granted, if you go searching for negative stuff on anyone, you will likely find it. Have we all made mistakes? Yup. But at least a decade long of deplorable behavior is not a mistake, it’s who he is. I truly am not trying to hurt anyone’s business or livelihood, it’s never my intention to cause anyone discomfort, but his antics have gone unchecked for far too long & he’s hurting others. Jeffree has some admirable traits, as I mentioned. It’s too bad the hate in his heart overshadows the good he could do.”

Star and representatives from his makeup company did not respond to requests for comments. Nicole also noted that she has not personally heard back from Star in response to the criticism, but said she has been blocked from his social media pages.