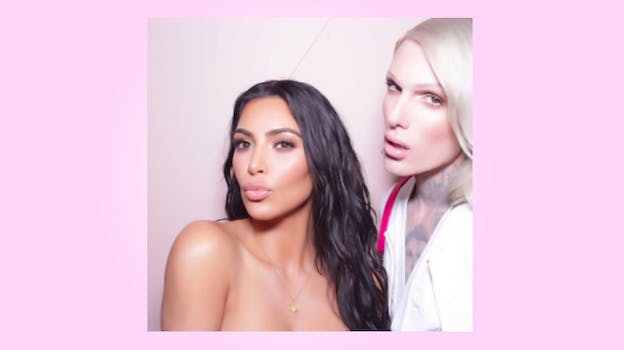 In a string of Snapchat videos, Kardashian told fans to forget about the past.

Kim Kardashian is under fire from the Twitter community after defending YouTube makeup guru Jeffree Star. It all started Monday night when Kardashian showed Snapchat followers swatches of her KKW contour palette. While fans rejoiced at the opportunity to look like the contour OG herself, Star was not impressed by the formula.

Star took to Twitter to compare the consistency of the formula to chalk. His harsh words do not come as a surprise to those who keep up with his social media presence. Star, who is known for “keeping it real,” has told fans he will always give them his honest opinion no matter how big the makeup brand is. The Jeffree Star Cosmetics owner praised Kardashian’s contour sticks last month during his review of her makeup release. However, this time around he was not a fan of her new contour palette after viewing her swatches.

Fans were so upset by his opinion they began to resurface Star’s racist past. It seemed to be a move by fans to support Kardashian, but in a surprising twist the reality TV star defended him. In a string of Snapchat videos, Kardashian told fans to forget about the past.

Kardashian started the video by bringing up the swatches that stirred the pot.  She said she’s still learning about the makeup world, and Star is one of the best to be critiquing her.

“Because of his remarks I’m learning from the best… on how to swatch properly,” she said.

She then referred to her fans who brought up his past as “petty.”

“I see you being so petty. Bringing up things from his past. Where he, you know, was negative, but he’s also apologized for those things. And I get it’s a serious deal if you say racial things, but I do believe in people changing… and I will give him the benefit of the doubt,” she added.

The past Kardashian is referring to involves videos that surfaced during Star’s feud with cosmetic queen Kat Von D. Back in 2016 Kat made a video claiming Star hadn’t paid money to certain people and called him as a racist. This brought fans to do some digging where they resurfaced videos of Star screaming the N-word at women on the street.

Comments like these were unforgivable for many fans who took to Twitter in shock of Kardashian’s request for forgiveness.

After stealing trends and ideas from black women, it seems Kim Kardashian thinks she can comment on black issues. So bold pic.twitter.com/QoIKTBCwzc

Star has apologized for his dark past on different occasions. The most notable being his 15-minute June video titled “Racism.” In the video Star apologized for his past comments and said he doesn’t know who the person in those videos is because he is no longer that person.

“I want to look everyone in the eyes and let you know that everything that you have seen is so, just, wrong. It’s upsetting, it’s nasty, it really makes me sick to my stomach because what I was saying is not what I represent. I think that racism is a very serious subject especially in today’s world. I’m embarrassed as a person because that is not what I’ve ever stood for,” Star said in the video.

Amid the controversy, Star took to Twitter to thank Kardashian for understanding his feedback.