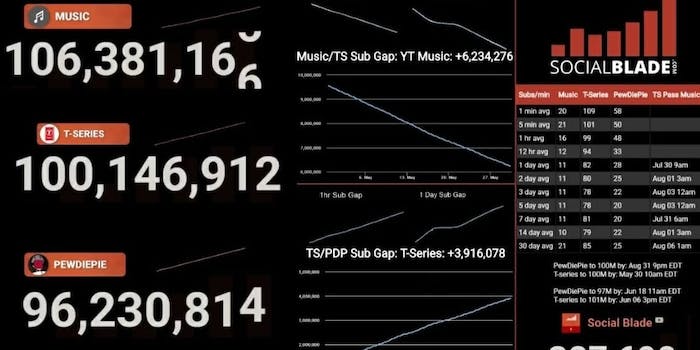 Can YouTubers’ beloved SocialBlade be saved?

The influencers are furious.

When YouTube announced earlier this month that it would stop making exact subscription numbers available for public consumption, a number of YouTubers expressed their dismay. And the future of third-party analytics site Social Blade, all of a sudden, became awfully murky.

But after a YouTuber outcry and a nationally trending hashtag to #SaveSocialBlade, the website met with YouTube on Wednesday to discuss solutions to the platform’s new directive.

“After over a week of trying to get a meeting with @TeamYouTube we finally have one scheduled for an hour from now. If you have any constructive feedback to share with them regarding the abbreviated subscriber numbers (via the api), reply to this tweet,” Social Blade wrote on Twitter on Wednesday.

On Wednesday evening, Social Blade gave an update, writing, “We had the call with YouTube and voiced our and your concerns along with solutions we think would be better suited. They took a lot of notes to share with the team in charge of this. Not sure if anything will change but it’s a start. We asked for a follow up next week.”

Earlier this month, YouTube announced it would begin abbreviating subscriber numbers. So, if you have 129,015 subscribers, your count on your YouTuber page would actually be reflected as 129K. If you have 17.2 million subscribers, the number would be reflected as 17 million until you reach the 18 million mark. YouTubers can still get their exact numbers in their YouTube Studio, but they couldn’t see anybody else’s figures.

YouTube didn’t give a reason for the change, but it did write in a blog post that “We know subscriber counts are extremely important for creators and fans alike, so we wanted to give everyone a heads up a few months in advance of this change.”

Upon closer look, it might affect our data display, but only time will tell.

Here’s the reason why any of this matters and why there’s been a push to save Social Blade. The subscription numbers allow YouTubers to measure each other against others, to see what videos work and what don’t, and it allows viewers to get in on the drama when a massive YouTube feud erupts.

Take, for instance, the recent Tati Westbrook vs. James Charles feud. After Westbrook accused Charles of being disloyal, fans kept tabs on just how many hundreds of thousands of subscribers Charles lost. Then, when the subscriber pendulum swung back the other way and Charles began gaining subscribers while Westbrook lost hers, viewers hungered to know the data.

The long-running T-Series vs. PewDiePie feud also was energized by multiple YouTube channels who created live streams that used Social Blade’s data to keep tabs on who was leading in overall subscriptions. Social Blade also kept track of the moment on Wednesday when T-Series became the first channel to cross the 100 million subscriber plateau.

Even Jimmy Fallon used Social Blade to know exactly when The Tonight Show got its 20 millionth subscriber.

All of that data and drama could go away for Social Blade, though. That made a number of YouTubers mad.

YouTube: Lets abbreviate sub counts so no one will know a YouTubers sub count and so that we kill off one of the most useful statistics sites for YouTube!#SaveSocialBlade

To see Youtube effectively killing off @SocialBlade is painful to watch…

We’ve turned to SB for years for live subscriber counts and simplified statistics. Why Youtube never implemented these is beyond me…

Another example of not listening to the community. #SaveSocialBlade

But perhaps there’s hope for Social Blade and the YouTube creators, fans, and journalists who follow it because YouTubers have made the compelling case that a site like Social Blade is essential for their channels.

As YouTuber Sealow wrote, “Whenever YouTubers experience less promotion or [subscriber] purges they always go to Social Blade to check if they’re alone. Public and exact subscriber counts are essential for YouTubers to trust that YouTube [isn’t]screwing them over. The lack of transparency will lead to distrust.”