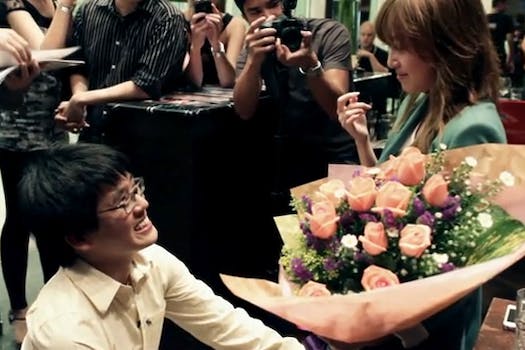 Vote for your favorite wedding proposal this Valentine's Day in YouTube Slam.

The online competition, which hosts daily tournaments that pit like-minded videos against each other, is hosting a special, Valentines Day-centric competition. The goal is to find YouTube’s most “Awwww”-inducing marriage proposal.

The competition’s current leader, Timothy Tiah‘s meme-tastic proposal to longtime girlfriend Audrey Ooi Feng Ling, which was covered by the Daily Dot late last year and since racked up 2.7 million views. To quickly recap, Tiah surprises Ling while she’s eating a restaurant, standing outside the shop’s glass doors and flashing a series of cards Bob Dylan-style, each of which contains an Internet meme (like the Philosoraptor that wonders how “Nobody makes me happy like she does”).

After two cards showing nothing but ellipses to built some necessary suspense, the final card contains an image of a kitten with the message “Will You Marry Me?”, a proposal that incites smiles from Ling in the moments before Tiah walks into the restaurant and handles the proposal for real.

Awww: Romantic Proposals will run through the rest of the day, and though the competition doesn’t provide any insight into how many votes each video has received, our money’s on Tiah and Ling’s proposal to win out.

You can have a look at Tiah’s proposal below. After that, check out videos from the next three most popular videos.