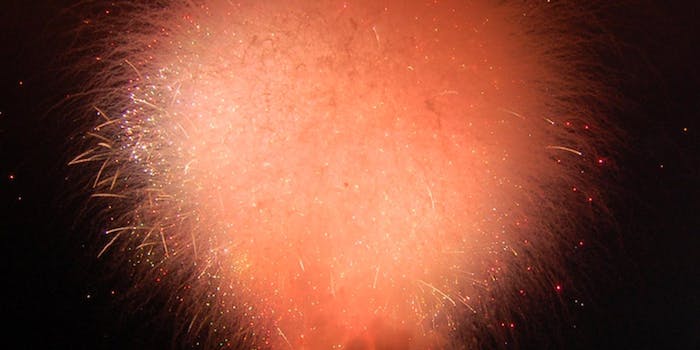 Officially, the San Diego fireworks display on July 4 was an abject failure. Unofficially, it may just be the greatest fireworks show of all time.

How was your Fourth of July holiday? Good? Did you blow anything up? The city of San Diego blew up a ton of stuff—all in the crazy, chaotic span of about 30 seconds.

Making matters were was the fact that city officials had chosen Queen’s “We Will Rock You” during the ceremony. In the case of fireworks displays, that sentiment is simply not true.

The unfortunate miscue was captured by a galley of San Diego-area onlookers, many of whom have since uploaded videos of the exploding orange mushroom cloud onto YouTube. Shot from the roof deck of the Karl Strauss Brewing House, YouTuber Andrew92106’s documentation of the explosion has been the most popular. Since posting last night, the video has received over 12,000 views.

“I had been adjusting my camera, getting all set up to record the entire show, when all of a sudden ALL THE FIREWORKS WENT OFF,” he wrote. “I quickly adjusted my camera and started recording. You can hear in the video if you listen closely ‘It looks like a finale.’

“Everyone thought it was just an awesome intro for the Big Bay Boom Firework show, which is really amazing each year I watch.”

To be honest, Andrew, this one was pretty sweet as well. As one unidentified woman said in another clip, “I can’t imagine what the grand finale will be like.”