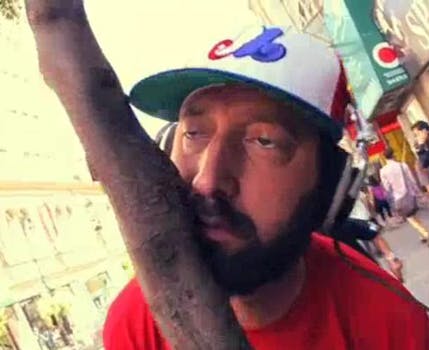 Back in the early 1990s, Tom Green had a rap group called Organized Rhyme that lasted about as long as the impulsive comedian’s stint as an MTV host. Some thought of the group as Canada’s answer to the Beastie Boys—most didn’t.

But Organized Rhyme were signed to a major label and landed one commercial hit in 1993, “Check the O.R.” (You can download it here.) Nearly two decades later, at last year’s Just for Laughs Festival, Green and his cohort MC Pin (@soundsyndicate) returned to the “mean streets of Montreal, Quebec” to film a modern version of the group’s one-hit wonder. And in the video, Green surprisingly resists the urge to put his bum bum on everything in sight.

On Reddit, where the video is quickly gaining momentum since being uploaded on Monday—view counts are currently frozen at 325 view—users were surprisingly supportive.

“That was a really fresh song as was the video,” offered Sleestaks .”I loved the energy. Beat was on point too.”

“Tom Green – By far my most favorite Canadian ever,” added mequals1m1w. “Dance move still there, not disappointed.”

Watch both versions below, and then file under the Vh1 category: Where are they now?