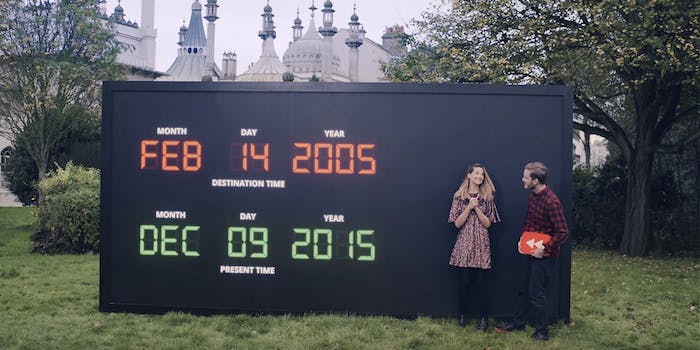 Can you “Nae Nae” through the ages? Can you imagine the classic “Charlie Bit My Finger” as portrayed by Dan and Phil?  With this year’s YouTube Rewind, the platform took a look back at recent history, and reimagined a bit of the past.

In the annual star-studded video that pays tribute to the best moments of the year in YouTube, the platform found new ways to mash up the biggest moments of the year, but also celebrate YouTube’s 10th anniversary with an even deeper rewind to the days of Mentos and Coke and choreographed wedding numbers.

This year’s Rewind kicks off with a tribute to the Love is Love Ad Council program featuring X-rays of skeletons, who, in their rewind incarnation, dance their way into various YouTube situations. Lilly Singh runs along a rainbow until she jumps into a giant YouTube ball pit, there are skeletons dancing on top of a school bus in the desert, driven by James Corden and Grace Helbig.

“The biggest challenges in producing Rewind are probably balancing the scheduling and creative needs of the 150+ creators who we cast every year with the production realities of shooting in multiple cities across the globe,” explained Finley Wise, head of production at Portal A, which produces the yearly Rewind videos.

Indeed, Corden isn’t the only mainstream celeb with YouTube prowess to make the annual video. John Oliver, who’s used the Web and YouTube in particular to bolster his HBO show, shows up in a section parodying Shia LaBeouf’s green screen art meme. LaBeouf’s influence is also part of another segment of the video, with a dance and sing-off inside the giant cage from his music video with Sia. Other highlights include a “Whip/Nae Nae” dance that pays tribute to the popularity of a hairstyle and makeup and fashion through-the-ages videos.

The video goes even deeper into flashback mode in celebration of 10 years of YouTube, with Pewdiepie and Zoella (which YouTube joking referred to as their ship name, Pewella, in the credits) sending us back in time, with some of today’s YouTube stars like Tyler Oakley and Smosh acting out former YouTube highlights like the Lonely Island’s “I’m on a Boat.” Even stars who are still around, like Double Rainbow guy and Rebecca Black, reprised their iconic moments.

To make such an epic video, shot across 18 countries, wasn’t all smooth sailing; licensing and coordination for all these moving parts is tricky.

Fortunately they had the help of Grammy-nominated music artist Avicii to score the video, and a few fun surprises on set.

“HolaSoyGerman and Yuya were great sports to dance on top of a moving bus. And Todrick Hall busted out a full front handspring on concrete, completely unprompted,” Wise said.

Now it’s fans’ turn to flip out to see how YouTube got all their favorite stars in one place to celebrate the year of YouTube.