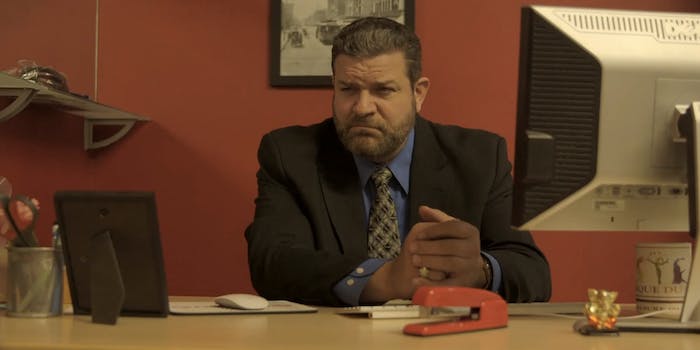 On YouTube, a new claim of plagiarism falls flat

If you’re going to call plagiarism on a fellow YouTuber, you better have a solid cause for alarm. This week self-confessed YouTube newbie GradeAUnderA took to his channel to call out YouTube veteran Ray William Johnson for “plagiarizing” his recent work.

Within two weeks’ time, both creators posted videos about job interviews. At the base, they’re differently styled videos. GradeAUnderA’s is a cartoon with voiceover that serves as a personal comedic monologue about why he hates job interviews.

Johnson’s, meanwhile,  is a skit featuring a variety of characters sitting in a job interview making comments that clearly aren’t helping them land the job, despite it being titled, “How to Ace a Job Interview.”

GradeAUnderA points to three overlapping jokes as proof of plagiarism.

“I’m late all the time” vs. Johnson’s “I’m probably going to be late for work every day”
“So tell me about a weakness of yours?”
“Oh my god where do I start?”
“Where do you see yourself in five years’ time?”
“Hopefully not in this shithole.”

All three are standard questions and tired replies. None of them plays on personal experience or uniqueness. In both videos, the protagonists go on to make other, more varied riffs on their employability that differentiate the videos.

This is not plagiarism. But that doesn’t mean YouTube doesn’t have a copycat problem.

There are real cases in the YouTube community of stolen bits or jokes. Most recently, The Fine Bros. called out BuzzFeed for aping their Teens React format, right down to set colors. There, the issue is pretty clear-cut. However, with BuzzFeed not technically infringing on any copyright terms or directly copying an already produced video from The Fine Bros., the idea of teenagers reacting to old things is not technically unique. That’s why a million versions of reality shows can exist. Part of YouTube’s power is repeatability, and ideas and themes are often redone to the point of oversaturation (challenge videos, anyone?). When it skirts the line of plagiarism, YouTubers’ claws should come out, but weak accusations like GradeAUnderA’s just muddy the water of what is and isn’t a punishable offense.

Claiming plagiarism on YouTube is a serious offense. On a platform where creators are fighting for eyeballs to make a living off their ad revenue, a stolen idea could divert eyes away from your content, not to mention it’s just rude and unethical.  If there were some irrefutable evidence that Johnson watched GradeAUnderA’s video before conceiving of his, maybe there’d be an argument. But sometimes alleged plagiarism is just two YouTubers making the same old, basic jokes.

In the end of his video, GradeAUnderA doesn’t come out and make a full-fledged accusation against Johnson because he says he’s new to the platform and doesn’t know what he can and can’t do. He’s definitely on his way to pro status, because a user with 30,000 subscribers calling foul on a power user with 10 million subscribers turns eyeballs. GradeAUnderA has self promotion down, at the very least.