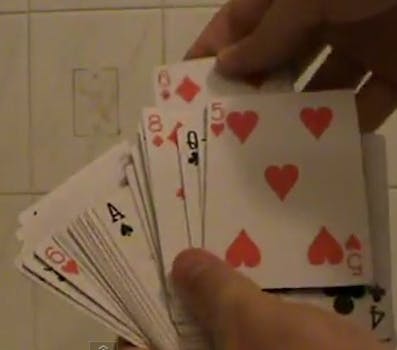 How-to videos are a YouTube staple. Besides being lucrative for content creators, tutorial guides  are generally informative, timeless, and sometimes even hilarious.

But you’ve never seen an instructional video quite like the ones made by HowToBasic.

The YouTuber has taken this classic how-to video convention and literally turned it upside down with his parody tutorial videos. Filmed in either his kitchen or bathroom, HowToBasic never speaks, instead letting his hands do the talking. And he makes everything look easy.

The videos are on average less than 15 seconds long, and he’s made more than 100 of them. The channel has more than 20,000 subscribers and collected more than 1.5 million views since December 2011.

Sometimes the viewer is lucky and gets a partial body shot, but generally the viewer only ever gets to see HowToBasic’s hands as he “properly” and silently instructs the audience on how to do tasks “the correct way.” Some videos feature HowToBasic performing banal actions without incident, like “How to Ring a DoorBell,” but their existence on the channel still manages to be satirical.

The following are some of the Daily Dot’s favorites.

1) “How to Correctly Open a Packet of Chips”

“I find that this is the safest and cleanest method to date,” HowToBasic wrote in the video description.

“[W]ould﻿ this work with doritos as well?,” freestylemydestiny wrote in a top comment. “No” HowToBasic responded.

2) “How To Make a Delicious Chocolate Milkshake”

HowToBasic asserts in the video’s description the taped method is, again, “without a doubt the cleanest/safest method available for making a chocolate milkshake.”

“This is art,” countered jure12kill.

“Does the﻿ size of the painting matter?,” asked TheMultiFirestarter in regard to this 13-second video, which focuses on a ceramic plaque. “I really need more help with this.”

4) “How To Use the Soap Dispenser”

“I had to watch this again﻿ to understand it,” commented TheSupahAsian, to which HowToBasic amicably replied “Yeah, it may take some time for you to fully understand what is going on. But be patient and you will﻿ learn!”

“And﻿ the legend began,” wrote badboyMCcrzymtrfuker in the most liked comment on HowToBasic’s first video.

“I still don’t﻿ know how to put it down!” commented YouTuber xAIPz, unsatisfied with the umbrella tutorial. “Teach me.”

And teach he shall…