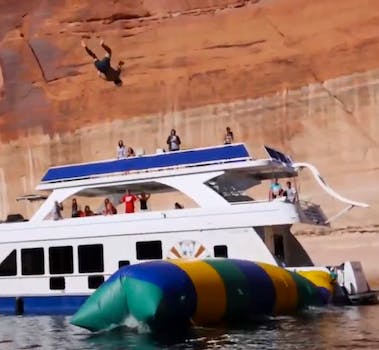 Devin "SuperTramp" Graham spends the last days of summer watching his friends jump onto a 50-foot blob in a remote Utah canyon. Plus: Hannah Hart of "My Drunk Kitchen" does her best Daily Grace impression.

We’re halfway through October already, but anybody who knows anything about Devin “SuperTramp” Graham knows that summer doesn’t end until the superstar YouTube videographer says it does. In his most recent film, Graham travels out to a remote lake in a Utah canyon to document the scene around the Blob.

The second viral video supercut from French filmmaker Luc Bergeron brings together the wide ranging personalities of PSY, Annoying Orange, Where the Hell is Matt, the “Charlie Bit My Finger” kids, the golden-voiced Ted Williams, and so many more to create this epic narrative spanning love, life, and (really cheesy) death.

Holy moly, does Hannah Hart do a really good impression of Grace Helbig, or what?

It was just another day in Cologne, Germany’s Wallraf Square when an assembly of WDR symphony musicians spontaneously gathered to play the great John Williams theme song to George Lucas’ classic Star Wars.

The folks at Olde Payphone take a look back at the life of Janelle, “J-Shot,” the biggest and most loyal fan in WNBA history. “It’s a rough road,” she says. “Where do I go to watch the games?”